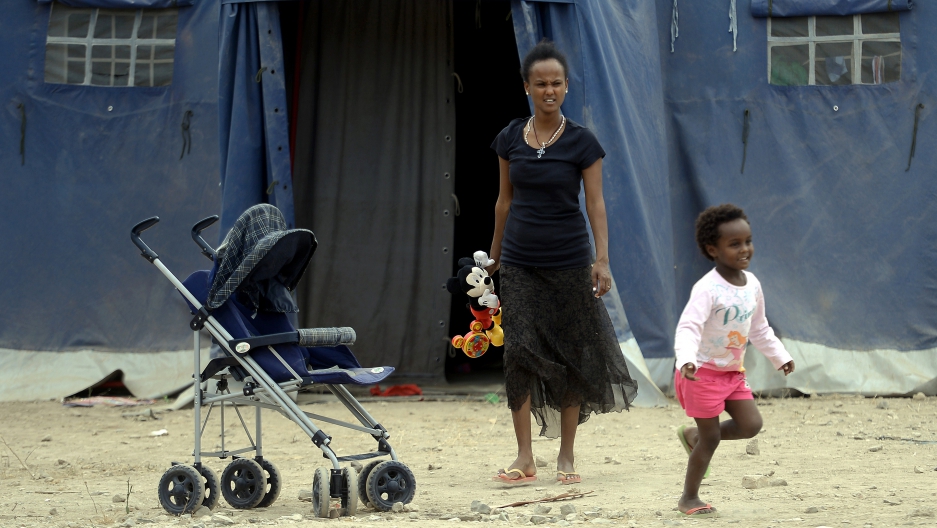 A migrant and her child stand next to a tent set up by the Red Cross in a refugee camp next to the Tiburtina train station in Rome on June 16, 2015.
Credit: Filippo Monteforte
Share

CASERTA, Italy — Another woman had just knocked at the front door of Casa Ruth carrying a terrible, familiar burden. Fleeing the poverty of her country for the promise of a decent job, she ended up in Libya and was forced into sex work.

For two years the woman had been locked up in an apartment-turned-brothel with other Nigerian trafficking victims. One day Libyan militiamen entered and ransacked the house and 17 of them gang raped her, she said.

A few days later she was put on a boat to Italy with other African migrants hoping for a better life in Europe.

Italian authorities sent her to Casa Ruth, a shelter for migrant victims of sex trafficking in Caserta, just north of Naples. There she met Sister Rita Giaretta, a 58-year-old Ursuline nun who has been like a mother to many in this safe house that she started 20 years ago to provide the trafficking survivors with spiritual and legal help.

Sister Rita Giaretta with books she published about her experience assisting victims of sex trafficking over 20 years.

The young migrant woman is safe now, but devastated, and pregnant with a baby whose father is unknown.

“She keeps crying and saying that she does not want the baby,” said Sister Giaretta. “But two days ago she hugged me and told me, 'Thank you, mum.'”

“Women have always paid the higher price in this world,” said the nun in a trenchant voice.

Giarettia a charismatic presence with sharp, gray eyes, became a nun at 29 — a relatively late age for taking vows. But she had already been working on the side of the vulnerable as a nurse as well as a trade unionist for Confederazione Italiana Sindacato Lavoratori (CISL), a national Catholic union in Italy.

“I had an ordinary life,” she said simply. “I was economically independent and had a boyfriend. But I felt the need for a broader sense in life.”

She said she began hearing an internal voice, a voice that became more resonant when she made a trip to India with some missionaries.

“The faces of the poor I met were the face of Jesus Christ,” she said. “That suffering was revealing me the heart of humanity. Their respect for life needed to be helped.”

The urge to help sent her into religious life, and, she said, it has never gone away. The long, grim work with sexual trafficking victims has shown her that “there is no limit to human brutality,” she said, but the resilience of the young women who end up at Casa Ruth has helped reinforce her faith.

“It is amazing to see how they can regain their confidence after having lost so much of their dignity,” she said.

Sitting in the sewing cooperative she founded to provide tailoring skills to the women, Sister Rita picked up a set of flower-shaped pins, made from the remains of textile fragments.

“They are a metaphor of my cultural challenge,” she said, surrounded by African fabrics. “To show that what people see as leftovers can blossom.”

That challenge has driven her since 1995, when she and two other Ursuline sisters moved from Vicenza, her hometown in northern Italy, to this area in the South known for human trafficking and Camorra, the local mafia.

Locals first called them “the bicycle nuns” because they had no other means of transportation. “But using bikes was also a way of being with people, engaging with the territory,” Sister Rita said.

This integration approach forged other choices, such as offering hot tea to sex slaves in the streets at night or settling the safe house in a residential building in the center of Caserta.

Twenty years ago residents looked down on them, Sister Rita said. Now people of the town routinely ask the women in Casa Ruth to babysit their children.

In the last two decades about 400 women, mainly from Nigeria and eastern European countries, have found refuge within the yellow walls of Casa Ruth. According to Sister Rita, all of the women have found regular work somewhere in Italy, a requirement for state authorities to provide a legal permit to live in the country.

Many of the women have since gotten married, like a Nigerian woman who asked Sister Rita to be maid of honor at her wedding in Sweden this month.

A sense of joy, born of solidarity, pervades Casa Ruth. At times it is hard for a visitor to realize that these women have gone through unimaginable cruelties in the global plague of human trafficking.

Of the 170,000 migrants who arrived in Italy last year, 18,000 were women. In February, Pope Francis called for help for “the many men, women, and children who are enslaved, exploited, abused as instruments of labor of pleasure.”

“Finally we have a pope that speaks frankly about human trafficking, in a language that everyone understands,” said Sister Rita.

Still, the Ursuline nun looks at herself and Pope Francis as members of a slim phalanx of fighters.

"The Catholic clergy is very patriarchal,” she said. “What message can the church convey if it still treats nuns like servants? Here we are helping women, but society needs to start helping men, the clients of these victims.”

This story was produced with support from the Henry Luce Foundation, the Mary Catherine Bunting Foundation, and Dan and Sheila Daley.