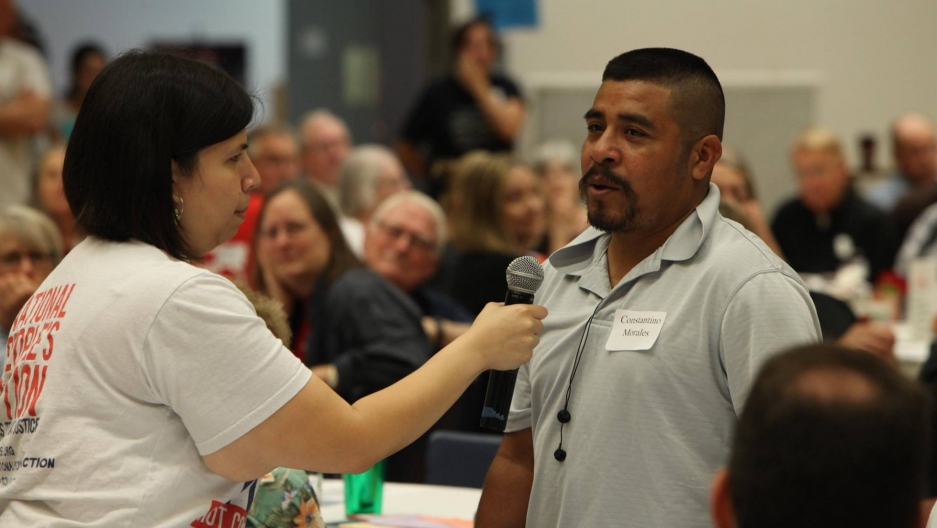 Constantino Morales, a former Mexican cop who sought asylum in the US, speaks at a July 2014 community event in Des Moines, Iowa. He lost his asylum case and left for Mexico two months before he could be deported.

In June's midterm elections in Mexico, voter turnout was higher than expected. Surveys showed that voters were voicing frustrations with drug cartel violence and corruption. But an increasing number of Mexicans cannot wait for electoral changes to improve their situation. They see leaving as the only option.

One asylum-seeker, Constantino Morales, fled Mexico and settled in Iowa. But once in the US, he was met by a host of new challenges that Mexicans face when it comes to obtaining asylum.

When I met Vanessa Marcano-Kelly, she played a video of Constantino Morales on her cellphone, when they said goodbye for the last time. In the video, Morales thanked everyone who helped him with his legal case.

“Constantino had stepped up to become a community leader because he wanted to share his story and try to make a difference,” she says.

Marcano-Kelly and Morales were friends and worked as community organizers with Iowa Citizens for Community Improvement. Morales came to Iowa from the Mexican state of Guerrero on the Pacific Coast. It’s a state with a fair amount of trouble, filled with cartels and corruption. Guerrero is the same state where 43 students disappeared last year. This is where Morales was a cop — a good cop, his family says.

He says Morales stood up to the cartels in a shootout and then got death threats when he left the force. So Morales crossed the border and headed to Iowa where his brother lives. But after a year, he was apprehended by immigration agents at his job and faced deportation. That’s when he learned that he could apply for political asylum.

“When the asylum stuff started going, he just couldn't afford it at all. He didn’t make a lot of money. That's why he couldn't get an attorney,” says Marcano-Kelly. Not having a lawyer was a major hurdle for Morales.

Denise Gillman, who runs the Immigration Clinic at the University of Texas School of Law, says that — especially for Mexicans — the chances of getting asylum without a lawyer, plummet. She says that's “because there are certain biases in the system against seeing Mexico as an asylum-sending country, that make it more important to really develop the asylum claim. To do that without a lawyer is almost impossible.”

In recent years, fewer than 200 Mexicans have been granted asylum in the US annually — a tiny percentage of applications overall. In 2014, nearly 9,000 Mexican applied for asylum.

Gillman believes some judges worry about politics and that by offering more Mexicans asylum it will send a negative message about an important US ally.

But Jim Stolley, Midwest director of the US Immigration and Customs Enforcement's Office of the Principal Legal Advisor, says it’s not about politics. He says asylum isn’t hard to obtain just because someone is Mexican; it's because it’s tough to make the case for it.

“Just because a person suffers harm in his or her native country doesn’t mean he or she qualifies to be granted asylum here,” Stolley says. “If your country is embroiled in a sort of civil war or civil strife that does not necessarily constitute persecution … It has to be based on one of five protected grounds.”

That was hard for Morales, because he had to show he was part of a group uniquely facing persecution. Gillman says that makes it tricky for police to make their case because they can quit and leave the group. “But with, you know, really careful lawyering, it is in fact possible to win some of those cases … at the least the idea that this police officer was targeted because of taking a stance in favor of government rule of law,” Gillman says.

Morales ended up representing himself. And he lost. Afterward, supporters like Marcano-Kelly lobbied members of Congress to step in and get immigration officials to suspend his deportation order. “We generated over 200 calls. We sent hundreds of postcards. We had press conferences,” Marcano-Kelly says.

But it wasn't enough to convince officials that Morales deserved special protection. Facing deportation, Morales left the US.

“My brother, he didn’t want to break the rules. He said, ‘No, I got the order. I have to leave,’” Leonardo Morales says.

Back in Guerrero, Morales was shot and killed six months later. His brother says it was by the same people who threatened him before he first left Guerrero for the US.

Mercano-Kelly keeps the video on her phone to remember Morales. In it, he says that even though he didn’t get asylum in the US, he encourages other Mexicans to keep trying.