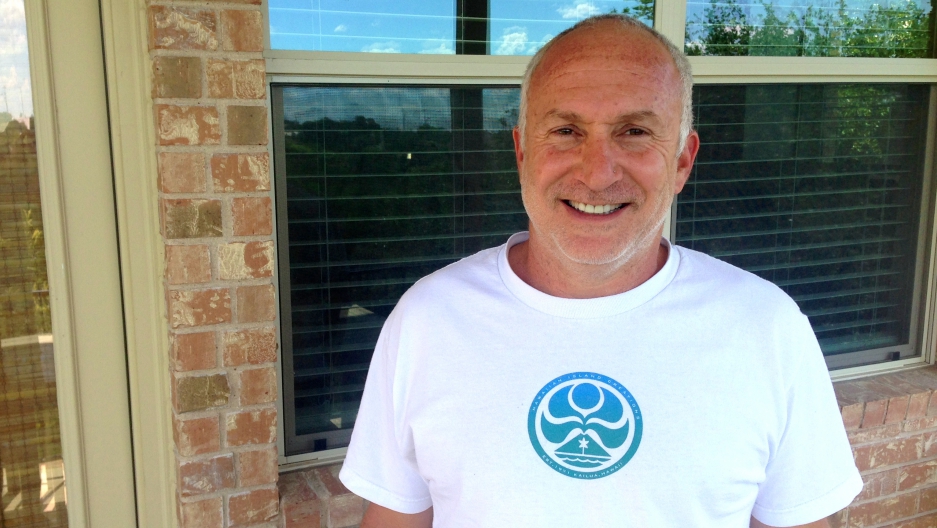 Ian Benouis is a US Army veteran, an attorney, and a Muslim who goes out of his way to speak up for his religion.

If there is such a thing as a stereotypical Muslim look, 50-year-old Ian Benouis doesn’t have it.

On the day we sat down for an interview outside of a mosque in his hometown of Austin, Texas, Benouis wore a t-shirt, jeans, flip-flops and a ballcap. Throw in his nose ring and some tattoos and his style is decidedly more hipster than anything Islamic.

But Benouis told me that religion has always played a role in his life. He grew up in Hawaii going to a Methodist church on Sundays, where he sang in the choir and served as an altar boy.

It was “a relatively standard American upbringing,” Benouis said. “Believing in God was taken for granted.”

Less than a minute into our conversation, we were approached by a uniformed security guard who works for the mosque.

“None of that can be going on here,” he said, gesturing toward the microphone I was holding.

Benouis and I left the mosque. Afterwards, he told me things used to be a lot more open and relaxed at local mosques. The heightened security level speaks to the nervousness in the Muslim community these days, he said.

“People know that there’s more attention being placed on Muslims. And then, you have this machine that’s stoke the fears. You know, there is fear and distrust and mistrust,” Benouis said.

The atmosphere of mutual suspicion is one reason why Benouis goes out of his way to talk about being Muslim in America, though his story is hardly typical. Benouis is a graduate of West Point. He is also a former Blackhawk helicopter pilot.

In his late 20s, Benouis said he went through a series of things that shook him up pretty seriously. First, he almost drowned while body surfing near Santa Cruz, which he said was a big deal for a kid who grew up in Hawaii. Then, he was deployed to Panama for Operation: Just Cause. Next, Benouis said his house was robbed and burned to the ground. And finally, his wife left him.

Benouis picked up a Bible and other books about religion and spirituality. Eventually, he started reading the Quran and it made an impression on him quickly. “It wasn’t some particular passage,” Benouis said. But his sense was that the book was “clearly true.”

“I guess that kind of makes me a Muslim,” he remembered thinking.

Islam was not entirely foreign to Benouis growing up, however, because his father was a non-practicing Muslim born in Algeria. Benouis said moving from Christianity to Islam as an adult did not feel like he was rejecting anything from his past, though some people close to him were a little taken aback.  “It was like I liked a different sport or a different team. You know, ‘You don’t like the Cowboys anymore?” he said.

When Benouis got engaged to a woman from a Christian family, he talked about his religion with his future in-laws-to-be and put them at ease. “It took a little bit of explaining,” said Karen Benouis. The couple has four children and they are raising them to learn about both the Islamic and Christian faiths. Karen said it works just fine for them.

Ian works as an attorney in Austin. He is also an advocate for veterans suffering from PTSD. After the shooting in Chattanooga last week, when a young Muslim shot and fatally wounded five US service members, I called up Benouis to ask what he was hearing from fellow vets.

“Surprisingly, there hasn’t been a lot of reaction from the veterans’ community [to the Chattanooga shooting], because this other reality is much greater,” Benouis said. He was referring to the vets who have returned from Iraq and Afghanistan and are struggling with issues like post-traumatic stress and access to good health care.

“People are coming back and fighting on multiple fronts,” he said.

And that includes, unfortunately, facing a threat from violent extremists here in the US.

But Benouis went on to say that the Muslims who espouse an extremist ideology represent a tiny minority. Muslims who can need to stand up and have the courage to say that.

“There’s definitely been improvement [with mutual understanding], but there is still a lot of work to be done,” Benouis said.