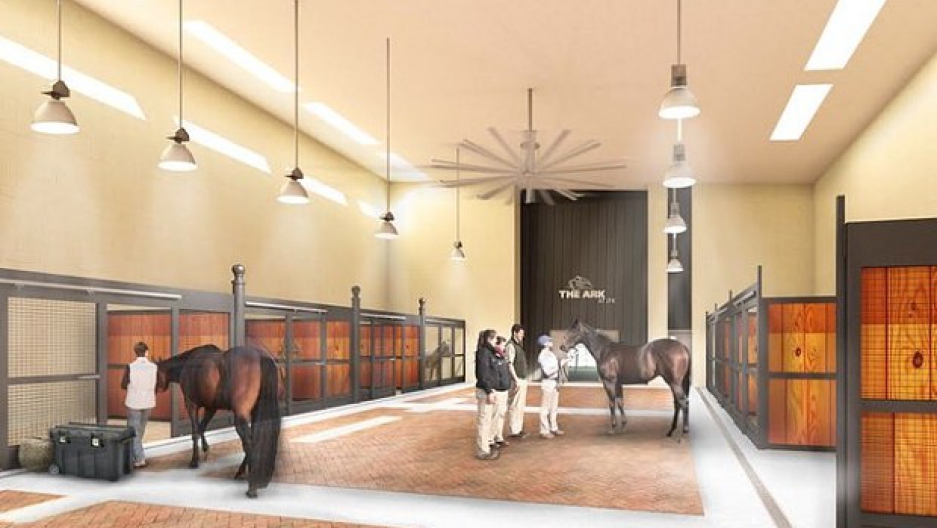 Projection of what the ARK Terminal will look like

New York's JFK airport is trying to cater to a new passenger demographic.

Construction is underway on the first airport terminal that will cater exclusively to animals, called the ARK after the biblical mode of animal transport.

Pet owners, zoos, and competitive animal showers, frequently find the need to fly their furry or feathered friends to one place or another. Many of these animals are quarantined for a few days before they fly to make sure they are not diseased. The ARK will offer quarantine facilities and accommodations for the duration of the stay. There will be holding pens with fresh hay for 70 horses and 180 cattle at one time, a special mating room for penguins, and an extensive resort for dogs including dog-bone shaped swimming pools and pet pedicures.

The Cornell University's College of Veterinary Medicine is providing consultation for the planning and operation of the project, and will have a 24-hour clinic when the facility opens. ARK Development LLC stated that the design was "a model that is anticipated to effectively transform the air transport of animals worldwide."

The terminal is also hoping to streamline the boarding process — and has designs that will allow planes to taxi directly to the building. "A lot of our design making is in collaboration with veterinarians and consultants to help minimize the amount of stress placed on the animal," said Cliff Bollmann, an architect working on the ARK, to the AP.

JFK already handles most animal transportation in the US, but airports in Chicago, Los Angeles, Miami, and San Juan also have animal-moving facilities. The ARK aims to edge out the rest of this market with the promise of researched amenities.

The state-of-the-art facilities and grooming at the ARK will not come cheap. Typically flying a dog from New York to London comes to about $1,000, not including the crate, and vet certifications. A night in the ARK is estimated to cost dog-lovers another $100.

The site for the new terminal is JFK's Cargo Building 78, which has been abandoned for over 10 years. A private company has taken control of the building from the New York and New Jersey Port Authority, and plans to open the facilities in early 2016.