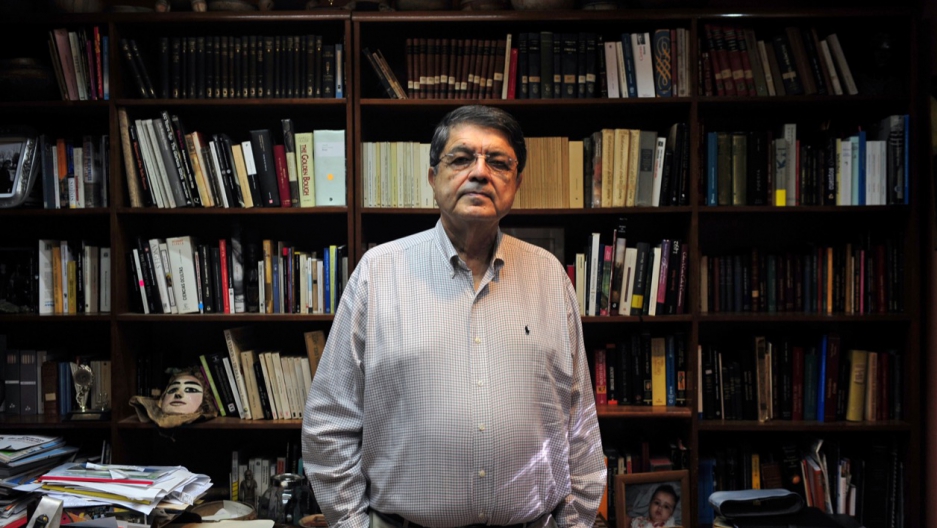 MASATEPE, Nicaragua — Stepping out of his childhood home, Nicaraguan novelist and former Vice President Sergio Ramirez walks through a park filled with children.

He is the town of Masatepe’s most famous son, and as he passes the canary-yellow church, neighbors of all ages approach to shake his hand. He greets almost all of them by name.

Ramirez stops in front of a large colonial-style house with its doors wide open. Passersby can look into a construction site that will soon house one of Central America’s largest collections of Hispanic literature.

“I hope that one day my entire personal library will be in here,” Ramirez says with a hint of pride, standing beside half-built shelves. “When I finish moving my books of Hispanic-American literature — I have about another 4,000 to go — we’ll have 10,000 books here.”

In addition to this library, the cultural center Ramirez is building in his hometown will have 10 computer terminals, rooms for music lessons, and a 70-seat hall for readings, concerts, and other cultural events. The grand opening, scheduled for June, will be a civic event of the first order.

Ramirez, 72, is not only a collector of Spanish-language literature, but a renowned contributor to the tradition. He has written nearly a dozen novels, as well as short stories and works of non-fiction, some about his years as a leader of the Sandinista government during the war-torn 1980s. There is no dearth of creativity in his life, but nothing seems to inspire him as much as walking the streets of his youth.

As a young man Ramirez left Masatepe to attend college in Leon, 75 miles northwest of here. He lives in Managua, the capital, but returns to his hometown on most weekends.

The Masatepe of his childhood, Ramirez recalls, was a bucolic, isolated artisan town of about 6,000. A radio station, a telephone and telegraph office, and a train line were among its few connections to the outside world. The only way out, it seemed, was through education — and Ramirez’s mother, Luisa Mercado, was one of the town’s most memorable teachers. In her honor, Ramirez created the Luisa Mercado Foundation, which will oversee the new cultural center.

Mercado attended a Baptist school in Managua and became the first girl from Masatepe to graduate from high school. In 1951 she founded this town’s first secondary school, giving people here access to a wider world that barely existed for many Nicaraguans. Without her influence, Ramirez might never have become the literary titan that he is.

The architect who designed the soon-to-open cultural center is Dorel Ramirez, the novelist’s daughter. After a visit to the construction site, she reflected on her grandmother’s legacy.

“She studied education, and as a secondary school teacher, she shaped the minds of many generations,” the architect said. “People here remember her fondly. She was very strict, but very methodical.”

The Luisa Mercado Foundation is a decade old, and already runs a library in Masatepe. Its reach will expand considerably when the new culture center opens. Ramirez expects that it will ultimately hold copies of 25,000 Spanish and Latin American novels.

The music school that will be a central part of the new cultural center reflects another aspect of Ramirez’s background. It will be named for his grandfather, Lisandro Ramirez, who was a devoted musician. Students will be trained in violin, cello, and guitar, and will perform at the center’s auditorium.

Young people here have already felt the foundation’s impact. Ariel Lopez, 18, says he frequented its library before graduating from high school. When working on his final research paper during his senior year, Lopez needed access to a computer, which few Nicaraguan households have.

“We were investigating human rights in the world, so I had to do in-depth research,” Lopez says. “I went to the police and interviewed people, but the internet gave me access to examples of people who had suffered abuses around the world.”  Without this access, he says, he would not have been able to write a paper good enough to allow him to graduate.

Today Masatepe looks like many towns in Central America, perhaps more picturesque but still small, with about 16,000 inhabitants. The new cultural center will make it extraordinary. Few if any Nicaraguan communities of this size offer young people comparable opportunities.

“I wanted to have an impact on a community to which I owe so much,” Ramirez says. Due in large part to his commitment, Masatepe is long past its days of isolation.