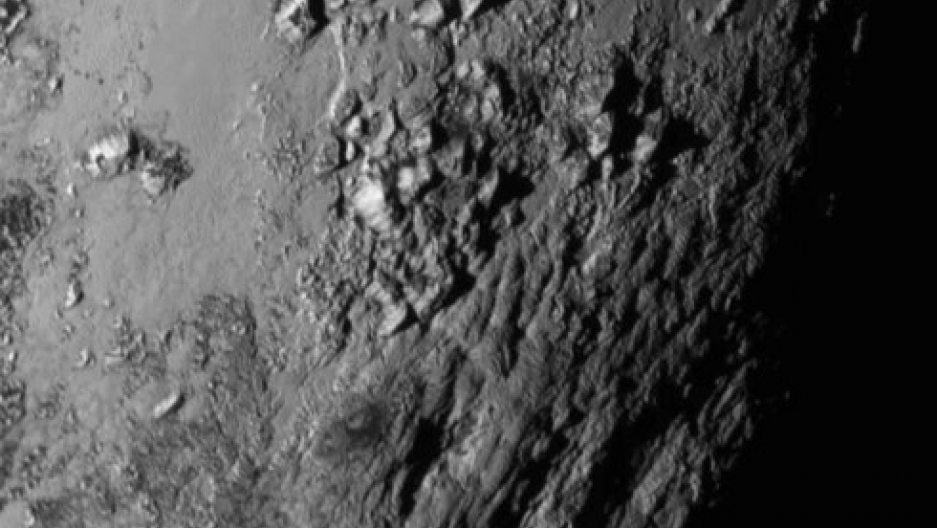 New close-up images of a region near Pluto’s equator reveal a giant surprise: a range of youthful mountains rising as high as 11,000 feet (3,500 meters) above the surface of the icy body.

This is Pluto — or, more specifically, a close-up of terrain bordering a heart-shaped feature dubbed “Tombaugh Regio,” for Pluto's discoverer, Clyde Tombaugh. The detail reveals a range of “young” mountains rising as high as 11,000 feet, which probably formed no more than 100 million years ago and might still be geologically active.

NASA's New Horizons spacecraft captured the image about an hour and a half before making its closest approach to Pluto — a heralded arrival that occurred when many of us on the East Coast were eating breakfast this week.

The flyby had been a long time coming. Scientists launched the New Horizons spacecraft on January 19, 2006 , and it had been homing in on Pluto, which hangs out in the Kuiper Belt — a sprawling region of ancient, icy, rocky bodies beyond Neptune — ever since.

The probe is about the size of a baby grand piano, and speedy. In fact, it’s the fastest spacecraft ever launched in history, according to Allen Stern, New Horizons principal investigator and a planetary scientist at the Southwest Research Institute. What’s more, “the ocean of space that we crossed from the Earth to Pluto is farther than any spacecraft has ever traveled to its primary target: 3 billion miles from the Earth,” Stern told Ira Flatow during the Science Friday broadcast on July 10.

The mission marks the capstone of an era — what Stern described as “the anchor leg in a 50-year enterprise to make the first reconnaissance of all the planets.” Indeed, a half-century ago to the day of New Horizon’s flyby was when we first explored Mars (with NASA’s Mariner 4), and through subsequent missions, probes have investigated every planet in the solar system, save for that small sphere with the Underworld-ly name.

Starting Monday evening, New Horizons slipped out of contact — by design — so that it could collect as much data as possible during its flyby. Then, Wednesday night, mission operations at the Johns Hopkins University Applied Physics Laboratory in Maryland received a signal from the craft indicating that the pioneering probe was alive and kicking, which prompted a round of cheers from the team. After a series of system check-ins, New Horizons operations manager Alice Bowman announced, “We have a healthy spacecraft. We’ve recorded data of the Pluto system, and we’re outbound from Pluto.”

Tune in to Science Friday on July 17 for an update on the New Horizons mission. @SciFri has also been keeping tabs on the flyby; here's a tweet sampler:

Pluto may be small, but it's still pretty big. For comparison, here's Manhattan in the surface image. #PlutoFlyby pic.twitter.com/HhGfTpyM51