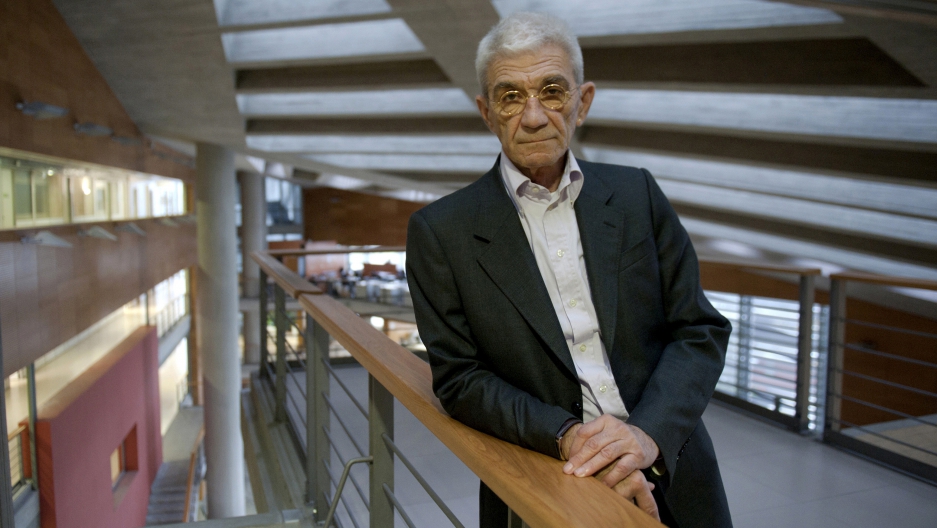 Yiannis Boutaris is 73 and wears Converse sneakers to work. He left the radio on low during our interview, the bouzouki pangs a fitting soundtrack to his thoughts on Greece. He is a recovering alcoholic, with tattoos running up his hands, which he uses a lot to express his points and to light his unfiltered Camels. Also, he’s the city’s mayor. And he’s nothing like the establishment that Greeks have had to tolerate for decades.

Boutaris has been shortlisted twice for the World Mayor prize. He runs his city in a way that cannot be easily defined, but works. When he entered office, the crisis was just over year along. His predecessor, Vasilis Papageorgopoulos, had left him with a debt of $130 million (Papageorgopoulos is now in prison for embezzling $18 million from the city of Thessaloniki). On top of this, austerity measures had just cut the city’s budget by 40 percent. So they whipped the city into shape by cutting fat and jump-starting businesses; after four years, they were in a surplus.

The thing about Boutaris is he means everything that he says, and he has the guts to say what he wants. “People many times say, ‘I don't know where to place you,’” he told me in his office on Thursday. “Yes you don't know where to place me, because I don't belong nowhere — I belong to my beliefs! Different ideologies — Marxism, Communism, New Liberalism, Conservatism – I don't believe in them. Because life moves. If we believe that things move, then we must adapt our minds to new realities.”

In this interview, Boutaris discusses his struggle to change the Greek mindset, the lack of solidarity he felt from Germany in Europe’s recent Greek bailout negotiations, and the criticisms that rile him up the most.

I wonder what it has been like to run a city through all these years of austerity.

It's a little bit of fun. Because when you're in an impasse, you have to find a way out. You must start negotiating with yourself, "How can things become better?" Even if there's an impasse. So that's what I call fun, even though all of this, it's not fun. It's tragic. In a city where you have 30 percent unemployment, you have more than 60 percent unemployment with the younger generations, you see many people who cannot pay their rent or electricity bills because of these austerity measures, which are not very just. But you've got to persuade people that things need to change. People say, “OK, we'll change things, but I suffer.” You have to persuade them that they’ll suffer for a little while so things will become better. That is not easy or fun at all.

﻿What have been the hardest things to change?

The mentality of people. One of the things we try to pass along to people is, "Unless you do something, nothing is going to change."

﻿What do you mean by “something”?

﻿We came in with this slogan: "I love my city, I adopt my neighborhood." Meaning that if you don't care for your small neighborhood, about the dogs that run around, the garbage, the graffiti, about saying good morning to your neighbor, things will not change. If you don't all agree to bring down your garbage at a certain time, and a truck comes by, and in then in the next hour the dumpsters are full of garbage, then things will be dirty.

So how do you change the mentality of an entire city?

﻿It's not easy. You have to have gatherings and try to share this idea of obeying rules. You have to respect that if there's a No Parking sign, it's there for a reason. When you park on the edge of the pavement and garbage trucks cannot make a turn, we have a problem. And no one is going to solve it but you. If you feel that we have police that can run after all these little problems, you're totally wrong, because we’d need 5,000 policeman to follow these violations of the law. So if you want a nice city, obey the laws. It's simple as that, but it's very very difficult for people to do.

﻿You campaigned for "yes," which bothered some people. Why did you choose in this case to take a political stance?

Because the referendum was a little bit tricky. Was the question whether we want very strict measures or not? Who wants strict measures? No one does. If that was the question, the “no” shouldn’t have had 60 percent, it should have had 100 percent. But the memorandum in 1981, when we entered the European Union, said we have to adopt certain rules in our economy, which will coordinate with what happens in the EU. Look what happens in the states. Some have death penalties, some don't. You don't have the same rules. But you do have, in general, the same monetary policy and the same education system. This is what should happen in Europe. It should be a federation of states.

﻿How do you feel about the reality of it now?

﻿I feel very bad. Because the EU should first be a political union and then a monetary union. And nowadays the Germans and their friends think about a German Europe, and not a European Germany. It's evident. They want to be the conquerors, the ones who give the pace to Europe, which cannot happen. We are 50 percent to blame. Where is the solidarity? There is no solidarity left at all.

Why do you believe Greece is 50 percent to blame?

Because the EU should insist very much on coordinating with the rules of life in every country that enters it. They don't do that.

Look at these Dublin agreements, [which mandates that] we are obliged to keep all the refugees who come to Greece in Greece. This is is totally foolish. Where is the solidarity? We do not have enough money to feed them. We cannot give them shelter. These refugees gather in Greece, Italy, Spain — not Holland or Sweden.

And my proposition, which I suggested in a German forum, is that there should be a European committee, and if 100,000 refugees come into Greece, they should be immediately be distributed to all the European countries. But instead they say, “Keep them there. You, with no money.”

How will the incoming austerity measures affect how you run the city? What can you do to help?

Not much. Much of Greece is concentrated in the central government [including police, hospitals, school systems]. We don't have much authority to do things, as a city. We have some programs which are financed by the EU and the Greek state, which are mainly for food, shelter and things like that. We can aid start-up entrepreneurs. But there aren't many things we can do. It's beyond our abilities.

﻿You're obviously a very popular mayor. But you must get criticized sometimes. What are the criticisms you get that bother you the most?

We made the city more open, and many people criticized me for [encouraging tourism to Thessaloniki in Turkey]. Because the Greeks have a problem with the Turks. And this is understandable in a way, because we lived so many years through school learning that the Turks are enemies. And I said, what the f---? Why are they enemies? We lived for 500 years under the Turks, we have many similarities with them as people and cultures. And Mustafa Kemal was born in Thessaloniki. Like it or not, he's the founder of Turkish democracy. Do we have to spend any money to publicize this? No. The result was that we now have more than 100,000 Turks visiting Thessaloniki — that's a lot of money.

There was a genocide of the people from Pontios. There was a genocide of the Armenians. We must never forget it. But this must not dictate our behavior. Because this happened. So what? It happened. You cannot bring it back. There's no way to bring it back. They also experienced the exchange of population in 1923. And the same way we feel when we go to Istanbul and Smyrna, when we visit the houses of our ancestors, is how they feel, too.

﻿Greeks are to me very positive people. They're not depressed, they can feel their feelings and are generally optimistic — but a lot of people feel pretty exasperated. Knowing that there will be more difficulties to come, what gives you hope?

﻿What gives me hope is that in this whole memorandum, there's not one word about private business investments. If we don't have enough state investments in public works like roads, railroads, airports, and things like that, they will invite private investors to give, in good conditions, the half that we'd need. This could bring 50,000 jobs, which would let the economy start moving. So if we give private companies hope that they’ll make more profit if they invest here than in Turkey or Bulgaria, there will be hope. Otherwise, we are lost.