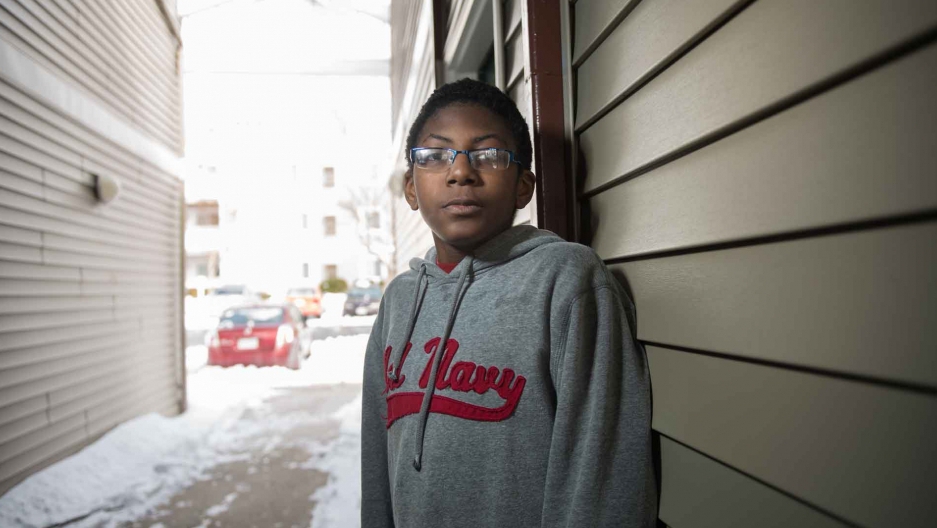 Kayleb Moon-Robinson — who is diagnosed as autistic — had barely started sixth grade last fall in Lynchburg, Virginia, when a school resource officer filed charges against him. Kayleb was charged with disorderly conduct for kicking over a trash can and then with felony assault on a police officer because he struggled to break free when the cop grabbed him. The Center for Public Integrity analyzed national data and found that Virginia schools refer more students to law enforcement than other states, and that nationally schools refer black and special-needs kids to cops and courts disproportionately.

Harsh and unequal treatment of minors in the juvenile justice system has come under scrutiny during a congressional hearing on incarceration in America.

The hearing on Wednesday before the House of Representatives Committee on Oversight and Government Reform took place as bipartisan momentum builds to negotiate sentencing reforms and other measures aimed at creating a fairer, smarter, more cost-effective criminal-justice system. The session took place a day after President Barack Obama delivered a speech encouraging Congress to pursue reforms rolling back mass incarceration for low-level offenses. The president also urged changes to address a so-called school-to-prison pipeline affecting mostly lower-income and struggling communities.

“If you are a parent, you know that there are times where boys and girls are going to act out in school. And the question is: Are we letting principals and parents deal with one set of kids and we call the police on another set of kids? That's not the right thing to do,” Obama said during a speech Tuesday before the National Association for the Advancement of Colored People’s annual convention in Philadelphia.

At the hearing on Capitol Hill Wednesday, lawmakers heard testimony from Liz Ryan, a long-time juvenile justice reform advocate who recently founded the Youth First! Initiative. The Washington, D.C.-based group wants to end the jailing of minors for lower-level offenses and roll back laws requiring 16-year-olds to be tried as adults.

Ryan started her testimony by recounting the tragic jailing — and eventual suicide — of 16-year-old Kaylief Browder, an African-American boy from the Bronx who was arrested for allegedly stealing a backpack in 2010. He was  automatically charged as an adult under New York State law. Browder’s family could not afford $3,000 in bail, so he was held at New York City’s Rikers Island pending trial. He was assigned a public defender, yet ended up languishing in the notorious jail for three years of harrowing abuse — before he was even called to trial.

“For a year during his stay at Rikers, he was placed in solitary confinement,” Ryan said. In 2013, charges were dropped against Browder, and he was released. He committed suicide last month.

“Like Kalief Browder, who was detained for taking a backpack,” Ryan told lawmakers, “most youth who are detained or incarcerated in the justice system do not pose a serious threat to public safety.”

In fact, she testified, “according to the latest data from the US Department of Justice, three quarters of the youth incarcerated in the juvenile justice system are locked up for offenses that pose little to no threat to public safety such as probation violations, status offenses [like running away and truancy], property and public order offenses, and drug offenses.”

Ryan told lawmakers that only one in four youth in juvenile prisons and other out-of-home confinement had committed any of the crimes considered the most serious and violent, such as aggravated assault, robbery, rape or homicide.

“The abuse of youth in these facilities,” Ryan added, “is well documented in news reports, lawsuits, studies and from incarcerated youth themselves.”

Treatment in isolation, with family ties severed, is often ineffective, Ryan added, and kids in  jails are exposed to serious criminal behavior and end up committing more offenses later in life. Research shows that black and Latino kids are arrested and prosecuted in greater proportion than white peers accused of similar offenses, and are diverted from jail less often than white kids.

Lawmakers asked at what point during criminal-justice procedures — during arrests or in court — did evidence of bias appear to be strongest. “There are disparities in every step of the process,” Ryan replied.

“Simply put,” she said, “we have two justice systems: One for white people with means, and another for people of color who do not.”

This year, the Center for Public Integrity analyzed national education data showing that black, Latino and special needs students across the country are disproportionately referred to law enforcement agencies from their schools, mostly for minor infractions.

Additional data obtained from a sampling of local police departments in Virginia — which led other states in referrals—showed that black students are disproportionately arrested at school and sent to court mostly for allegations of disorderly conduct and simple assault, including middle-school fights.

Last fall, as the Center investigation recounted, Kayleb Moon-Robinson, a sixth grader diagnosed as autistic, was charged with disorderly conduct for kicking a trash can at his Lynchburg, Va., middle school. He was later arrested and charged again for felony assault on a police officer after he struggled to break free from the officer; the officer had grabbed Kayleb after the 11-year-old walked out of class without permission and was wandering the hall.

Virginia governor Terry McAuliffe, a Democrat, has asked members of his cabinet to investigate referrals of students to law enforcement at schools in his state and examine possible reforms to cut the numbers.

In 2014, another Center investigation revealed that accused Tennessee truants had been shackled and jailed after appearing in juvenile court with no legal defense to represent them.

A number of the jailed students had mental health and learning problems that had not been diagnosed or addressed with appropriate programs inside schools. At a US Senate Judiciary Committee hearing this year, a lawyer who later represented some of these Tennessee students testified that the minors had been jailed in violation of requirements states must follow to obtain federal funds for juvenile-justice programs.

This story was cross-published by The Center for Public Integrity, a nonprofit, nonpartisan investigative news organization in Washington, D.C.