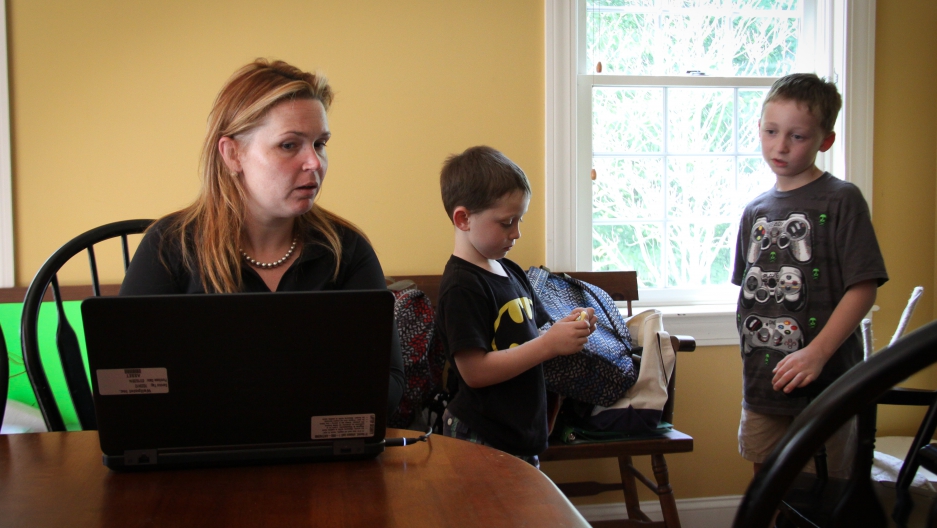 Corporate America is increasingly partnering with online higher education. First, it was Starbucks and Arizona State University. Then, it was Chrysler-Fiat and Strayer University in Virginia. Just this month, Chipotle got wrapped up in the movement. More businesses are paying for their workers to go to college, and employees are taking advantage of the opportunity.

After graduating from high school 19 years ago, Darby Conley promised herself she’d enroll in and finish college. She didn't.

“I decided to play house with a boyfriend who I was going to marry and fall madly in love with. And that didn’t work out,” she says.

To support herself, Conley got a job as a customer service representative with Anthem, one of the country’s largest healthcare companies.

At 22, she tried night school and then online classes at the University of Phoenix, but it was hard to schedule classes around her busy life.

Twelve years later, Conley was married with two young children and pregnant with her third, and she was still about five credentials shy of her associate degree. But Conley and her husband were worried about taking on more student loan debt.

“I was still talking another twelve grand. I didn't have that,” she says.

Just this month, Anthem announced that it will expand this program, making it available to all of its 55,000 full- and part-time employees. Courses will be offered online. No instructors. No grades.

Instead, students will be evaluated on their mastery of certain skills — writing, communicating, problem solving — and they’ll be assigned a coach to work with them one on one. Anthem says demand is high.

“Fifteen hundred signed up for information sessions,” says Aimee Skinner, who is responsible for hiring and retaining employees at Anthem.

At the company’s headquarters in Indianapolis, Skinner says in just the first week nearly 1,000 administrative assistants and call center representatives applied. Beyond generating loyalty, Skinner predicts the program will actually boost upward mobility within the company.

“Corporations are now beginning to step up and say, ‘Our employees need opportunity, not just for themselves but for us,’ ” says George Pernsteiner, president of the State Higher Education Executive Officers Association. Pernsteiner is cautiously optimistic about this self-paced model.

“Being online means that the student has to be self-motivated because you don’t have the kind of peer pressure, the kind of institutional supports,” Pernsteiner says.

A recent study from the University of California, Davis finds that students were 11 percent less likely to finish and pass an online course than students who took the same course in person. Still, Karen Kedem, a senior analyst with Moody’s, says these flexible degree programs should increase access to higher education and boost enrollment.

“Many of these individuals would not have the ability to enroll and complete a degree either because of the financial implications or from a scheduling perspective,” she says.

For working mothers like Conley, scheduling her own schooling around her job and her kids is key.

Conley says she struggles to find time and space to study. “Wherever the children aren’t is where I take the laptop and I go to,” she says.

This past spring Conley finally earned her associate degree in business administration. Now she’s working on her B.A. in communication. Although she no longer feels stuck in her job, Conley says she plans to stay with Anthem.