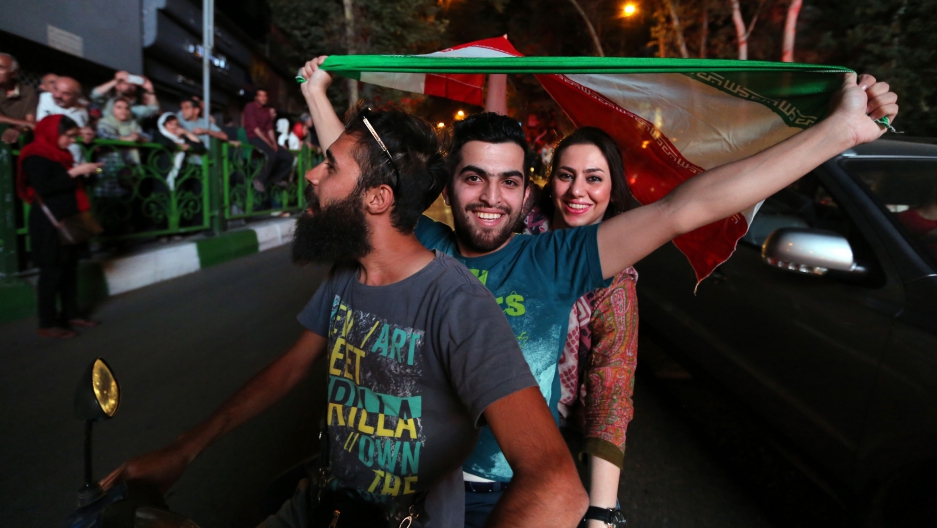 Iranians wave the national flag during celebrations in  Tehran on July 14, 2015, after Iran's nuclear negotiating team struck a deal with world powers in Vienna.

It's a new day for Iranians, no matter what time zone they live in.

One Tehran resident woke his brother in California with news of the landmark nuclear pact struck in Vienna.

"They made a deal, man! You were asleep, and they made the deal!" an Iranian who uses the pseudonym Behzed told his Iranian-American brother, whose nickname is Py.

Iranian Americans have expressed a range of opinions about Iran's deal with the
six world powers. The pact will lift sanctions on Iran, but ensure strict limits on its nuclear program.

Py is among the Iranians in California who are optimistic about the agreement.  He hopes it will ultimately make it easier for Iranians abroad to send money back home to their relatives, and will make visiting Iran easier. Behzed would like to catch a direct flight from Tehran to San Francisco to visit his nephew. Both brothers want the mistrust between the new nations to start to erode.

"The American volleyball team was here and people were ecstatic," Behzed says. "Communication really starts everything. If you meet people on a personal level, there's no talk about ideology, or I want to shoot you down, or I want to bomb you or annihilate you from the face of the planet. When people start talking to each other, things will become smooth."

Py says many Iranian Americans hesitate to travel back home to see their families in Iran because of the tensions between the two countries, as well as for practical reasons including the cost.

"Seeing my mother on a regular basis, having my son see his Grandma, those are the things that we value the most," Py says.

President Barack Obama will have to present the nuclear deal to the US Congress. No matter the outcome of that confrontation, change of some sort seems possible.  Behzad says there's already a joke going around Tehran today that the Iranian Revolutionary Guard will stop its regular distribution of fruit juice at major pro-government demonstrations.

"Now they're having a contract with McDonalds to give free Big Macs at state-sponsored demonstrates," he laughingly suggests.

Behzad adds that he's throwing a party tonight to celebrate the deal with his friends.

"I just got a very good homemade vodka, so that will help," he says.

Py suggests his brother also serve the Revolutionary Guard fruit juice, after he makes sure it's "spiked a little bit."