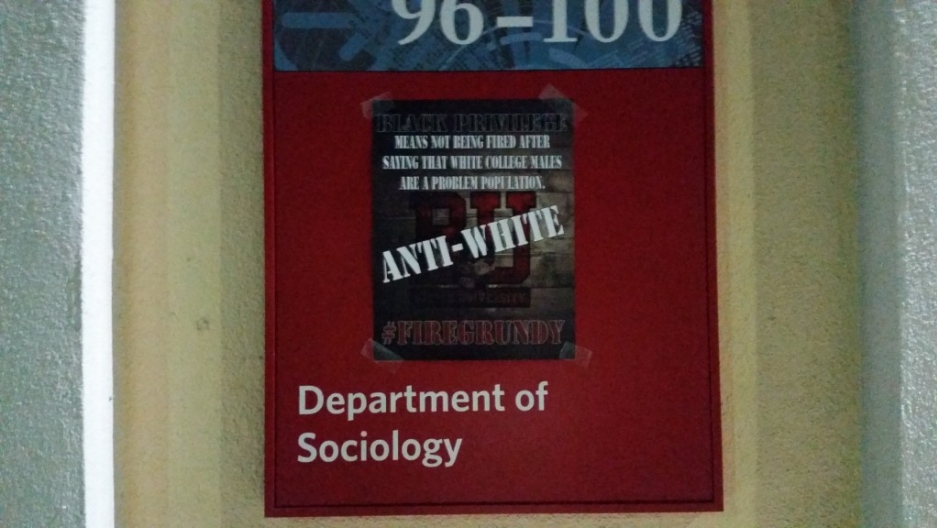 On a recent night, near Boston's Kenmore Square neighborhood, bright red posters, printed in Boston University colors, were tacked and taped on doorways, poles and windows all along Commonwealth Avenue. The posters condemned an incoming African American professor, Saida Grundy, who sent out a controversial tweet criticizing white males.

The posters reference that tweet and complain that "Black privilege means not being fired after saying that white college males are a problem population."

The message resonated with some BU students:

"They’re saying that white people can’t be racist towards black people but black people can do whatever the hell they want," said a student named Nicolas. "It's a double standard. They’re compensating for what happened 200 years ago, which there still should be a statute of limitations on it."

What this student doesn’t know is who is behind the posters. The National Youth Front or NYF says it is dedicated to "the preservation of all white people." Senior Will Belt saw three men hanging the posters the near BU’s Martin Luther King memorial — just days after Dylann Roof murdered nine black worshipers in a church in Charleston, South Carolina.

"So I look up and there’s three guys walking, kind of like stopping along the way, on Comm. Ave putting up posters," Belt said.

"Every poster that they put up, I would take it off and put into my backpack," he said. "And it was around the Kenmore area where they turned around, and I’m pretty sure they noticed I was behind them." 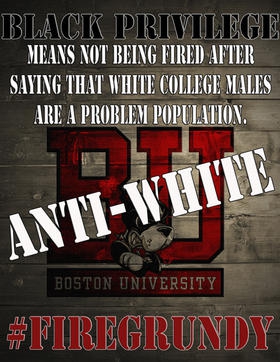 That shooting of black parishioners in Charleston has reignited concern over racial terrorism in the US. Hate groups are trying to influence followers in any way they can, including on college campuses like BU.

The NYF is affiliated with the American Freedom Party, which openly advocates white supremacy. It is only the latest in a growing number of extremist organizations targeting college campuses.

But Mark Potok of the the Southern Poverty Law Center in Montgomery, Alabama, says hate groups fueled by mainstream resentments and perceived slights over crime, affirmative action, immigration and other grievances see potential for growth.

"We see them as much on university campuses as in other places in the society," Potok said. "We see them — maybe not quite as much — but places like Vermont, New Hampshire and Massachusetts, as well as the Deep South."

If it feels like we’ve been here before, we have. The 1990s "sovereign citizen" militia and Aryan Nation movements were grounded in similar racist, antigovernment ideologies. Today, the militia movement is back.

The most prominent so-called Sovereign Citizen today is Nevada rancher Cliven Bundy. He was embraced by conservative media for refusing to pay more than $1 million owed to the government for grazing cattle on public land. Federal authorities backed down when dozens of heavily armed militia poured onto Bundy’s ranch in a show of defiance.

"I don’t recognize the United States government as even existing," Bundy said.

These ideas — no matter how distasteful — are protected by the first amendment. The problem, says Potok, is when these ideas motivate individuals to go a step further, like Dylann Roof did last month and Timothy McVeigh did 20 years before.

"The lone wolf phenomenon is something that has been developing for 30 years now," Potok said. "It's people like Timothy McVeigh, who act essentially alone or with one or two confederates." 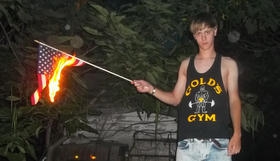 Potok says a number of factors are driving individuals into the hands of extremist groups, but the main factor is fear of a nonwhite nation.

"There are a very significant number of white people in the population who feel the country that their Christian white forefathers supposedly built is somehow being taken from them," Potok said. "And the appearance of Barack Obama on the scene very much much symbolizes that change."

In the early morning of November 5, 2008, just hours after Barack Obama gave a rousing victory speech in Chicago, three men splattered gasoline in the Macedonia Church in Springfield, Massachusetts, an African American House of Worship.

Police departments around the country took notice. Charles Kurzman, a sociologist at the University of North Carolina interviewed cops from Portland, Maine, to Portland, Oregon.

"Those men were convicted of civil rights violations, there’s no question," Kurzman said. "They were burning the church because it represented black America. And the most commonly cited threat from violent extremism is from what we call antigovernment violent extremism. Three-quarters of the agencies said that’s one of the top three threats that they were facing."

"You can point to the couple in Las Vegas who assassinated police officers last year in a restaurant," Kurzman said.

Where hate groups like the KKK and community lynchings were once accepted, violence motivated by hate is now criminalized. That’s why hate groups hope to inspire others like Dylann Roof to take action, Potok said.

"It’s very, very rare now to see these kinds of criminal actions [planned] in a smoky room filled with white men," Potok said. "It just doesn’t happen like that anymore. The real thinkers on the radical right, such as they are, have understood that if you have an organization that is essentially making criminal plans as an organization you are going to be taken down."

The ideas pushed by these organizations are directed at people like BU student Jim Russell. Outside BU's Marsh Chapel, he studies an online poster from the National Youth Front. He likens it to an army recruitment ad, with a finger pointed at him.

"I’ve seen a lot online and it’s been interesting to watch because the hate groups trying to organize are trying to be subtle," Russell said. "But I think those people can very quickly tell that whatever it is they’re trying to sell, that’s not what I’m about."

But Russell worries that such dangerous ideas might find a receptive ear from someone on this vast campus who may know little or nothing about the messenger, but agrees with the message.