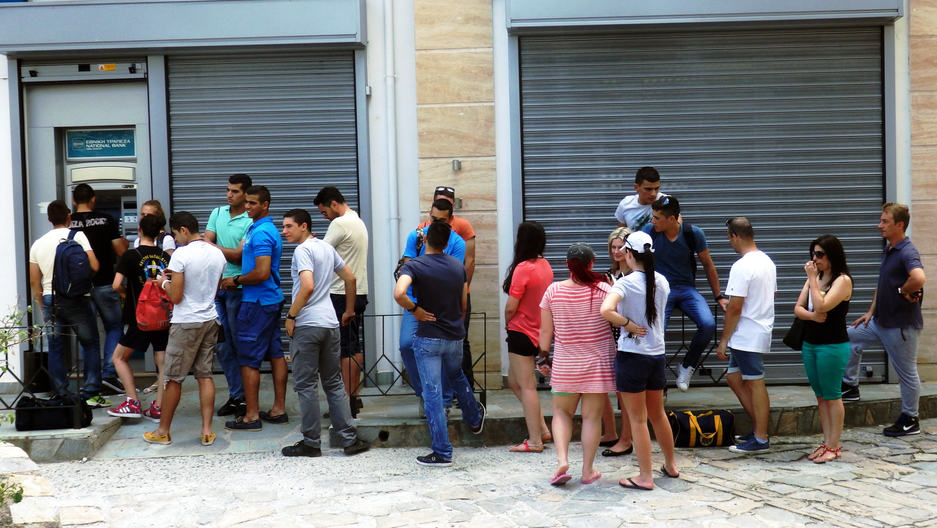 People lined up outside of an ATM in Greece.

How are international colleges and universities responding to the financial crisis in Greece? Some schools are allowing students to enroll without making a mandatory down payment.

“With access to the banks being limited, that coincided with the beginning of our fall registration period, which began the first of July,” says David Horner, president of the American College of Greece. “So we have been waiving the typical deposit requirements for students."The American College of Greece is the oldest and largest American higher education institution in Europe, but it's officially based in downtown Boston, the Athens of America.

The college's 3,500 students had been required to pay pre-registration fees. Eighty percent of the college’s students are Greek nationals, and the other 20 percent are international students from more than 50 countries. To maintain enrollment, Horner says students can now enroll without paying anything.

Horner's seven years in Athens have overlapped with the global economic crisis. Since 2008, Horner says the college has actually done quite well: Enrollment is up nearly 12 percent.

"I think the reason for that is partly the financial aid we're able to give,” says Horner.

Students agree. Senior Vassiliki Voskidi says in recent years the school has offered her more financial support. “We are struggling as a country, but I think we’re very positive, especially the students here because there’s this understanding from the college that they are here to support us and help us out,” Voskidi says. “So for me to be able to further my education, I wouldn’t be able to do it without the help of the College.”

Voskidi is majoring in communications. She's Greek American, originally from Virginia, but the 21-year-old has no income from family back in the US. She works part-time as a cashier in Athens to pay tuition and fees.

This week, she's among hundreds of students pushing off their payments. “Initially, I was a little bit nervous because I really needed to register for my courses,” Voskidi says. “But the president put out a notice for both new and continuing students to help them complete their studies with any possible way, and he was very understanding for the crisis, and he made it possible for those students that wanted to register and had to take certain courses.”

Despite the dire news, Horner is optimistic that European leaders will tackle Greece's longstanding economic challenges. "It's going to take time to work out of it, but Greece has been here for thousands of years, so I don’t think it’s going to fall into the sea anytime soon," says Horner.

He says the college recognizes that students and their families are struggling to stay afloat amid choppy economic waters, and it's trying to help them cope.