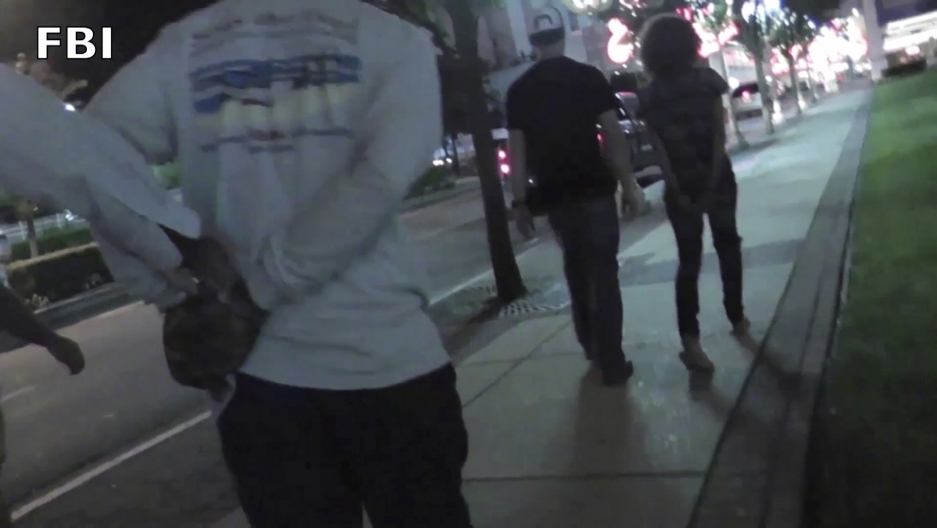 Law enforcement officers make an arrest in this still image taken from video in New Jersey, provided by the FBI July 29, 2013. The federal agency arrested 150 people across the United States in 76 cities, for holding children against their will for prostitution, during a three-day sweep.

(Editor's Note: At first blush, the decision seems like a victory for humanity. Courageous, even. Two credit-card companies announced a stop to transactions by sex workers to pay for ads on a personals/sex work site. But the writer of an upcoming book on sex workers says it may put more of them at risk. Here's her essay.)

Law enforcement officials have been unable to shut down Backpage, a website for personals and sex work ads, by legal means. So they have resorted to a more indirect approach: asking credit card companies to deny transactions by sex workers seeking to pay for ads on Backpage. Recently, they succeeded in convincing Visa and Mastercard to stop processing payment for Backpage ads, according to an article in the New Republic.  Noah Berlatsky writes that Tim Dart, the sheriff of Cook County, Illinois, argued that reducing sex worker ads will help fight trafficking and the exploitation of sex workers by pimps.

In reality, denying sex workers the ability to advertise on Backpage will only make their lives more dangerous. As I discovered in doing research for my forthcoming book, Getting Screwed: Sex Workers and the Law and noted in previous blogs here and here, having the ability to advertise online allows sex workers to more carefully screen potential customers and work indoors. Research shows that when sex workers can’t advertise online and screen clients, they are often forced onto the street, where it is more difficult to screen out violent clients and negotiate safe sex (i.e. sex with condoms). They are also more likely to have to depend on exploitative pimps to find customers for them.

Dart says he appealed to the credit card companies because he wants to reduce prostitution. But studies show that when women and men who are doing sex work by choice leave the profession, that only creates a vacuum for traffickers, who provide a corresponding increase in trafficked sex workers. Take Sweden, for example. Since that country outlawed the purchase of sex in 2000, it has not reduced the incidence of sex trafficking in the region, according to the Swedish government’s own reports.

Some law enforcement officials also say they want to close Backpage to protect sex workers from violent predators. Last week, police arrested two men whom they charged with robbing and killing an escort in a Burlington, Massachusetts hotel on July 2. According to The Boston Globe, the Massachusetts Attorney General responded by calling for the closure of Backpage, the site in which the murdered sex worker had advertised. But that’s not the solution to violence against sex workers. Criminals feel comfortable preying on sex workers precisely because sex work is illegal and they know their victims can’t go to the police because they will be arrested themselves. If law enforcement were serious about reducing such violence, they would support decriminalizing adult prostitution. In countries such as New Zealand and the Netherlands, where prostitution is legal, sex workers work closely with the police and violence against them is much less of a problem, studies show.

So even though Dart says he views sex workers as victims and wants to help them, by convincing Visa and Mastercard to stop Backpage transactions, he is doing exactly the opposite – making the profession more dangerous for sex workers. And that’s exactly what Berlatsky concludes as well in his New Republic column:

“Dart says sex workers are victims, but his actions suggest he intends to make sure they’re victims, one way or the other.”

This article was cross-posted from Alison Bass's blog. Readers, what's your view on this? Have your say in our comments section.