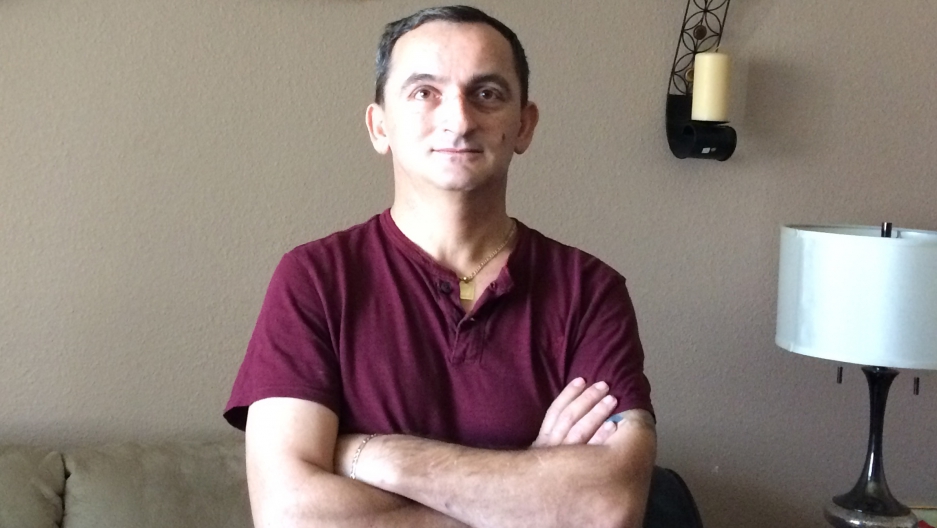 Vitomir Spiric in his home in Phoenix.

Eighteen years ago, Vitomir Spiric, his wife and young daughter arrived in Phoenix to start over. They're Bosnian Serbs who were displaced by the Balkan wars in the 1990s. The US government awarded them refugee status.

“We are started to live [a] nice life,” says Spiric, now 43, during an interview at his Phoenix home. His English is still limited. “Nice life, everything is nice, everything is perfect. We find a good job.”

He managed the bakery at an Albertson’s supermarket. The family began to put memories of the war behind them — and there were many painful memories. When Spiric was 20, mounting ethnic tensions forced him to flee his hometown of Zenica in Bosnia. He remembers seeing a spray-painted sign.

“It say this is a Muslim country,” Spiric says. “Serbs and Croatians, you must leave.”

It was 1992. Spiric says he was at a Red Cross shelter when recruiters from the Bosnian Serb Army picked him and other men up and forced them into service. He says he didn’t believe in fighting Muslims, and didn’t see the point — he felt he’d already lost everything.

Spiric says he tried to run away a half dozen times but the Bosnia Serb militia had police who would search for deserters, and they kept finding him and dragging him back.

A few years later, Spiric made it to Serbia. Once the war ended, he sought help from the International Organization for Migration in Belgrade to apply for refugee status to come to the US. The application form asked about his previous military service, but Spiric didn’t disclose his time in the Bosnian Serb militia. His application was approved.

Spiric and his family settled into their new life in Phoenix. Then, about a decade ago, US immigration officials discovered his name on the militia’s rosters.

The US government prosecuted Spiric for making a false statement on his immigration form and initiated deportation proceedings.

According to the government, Spiric is a suspected war criminal who may have helped the Bosnian Serb militia carry out the massacre of 8,000 men and boys in Srebrenica in July 1995, considered the worst atrocity in Europe since World War II.

Spiric insists he wasn’t involved in the Srebrenica massacre. He says he never killed anyone in the war, and wasn’t even issued a gun.

Jennifer Elzea, a spokeswoman for Immigration and Customs Enforcement, says it is typical for accused war criminals to deny they were involved in human rights violations.

“To be charged with a human rights violation or to be found to be a part of it doesn’t mean that you had to pull the trigger,” Elzea says.

She says participation in a war crime can also mean standing guard, conducting searches or driving prisoners into areas where killing was taking place.

“There are many people who unfortunately have to participate in something like the sad events in Srebrenica,” Elzea says.

The agency has initiated deportation proceedings against about 150 Bosnian immigrants suspected of war crimes. Elzea says these efforts send a message that the US is not a safe haven for human rights abusers.

But in these deportation cases, the government just has to prove to an immigration judge that someone is deportable, not that the person is actually guilty of participating in a war crime.

Failing to disclose service with the Bosnian Serb Army can be considered immigration fraud and is often sufficient grounds for deportation.

“Prosecuting someone accused of war crimes or torture for immigration fraud is a little bit like charging Al Capone with tax evasion,” says Scott Gilmore, an attorney with the Center for Justice and Accountability, a human rights organization in San Francisco. “It is easier to prove.”

Gilmore says it is a valuable tool for going after human rights abusers who have found refuge in the US.

“But the problem for society is that the truth does not entirely come out,” he says.

And immigration attorney Chris Brelje argues some of these deportation efforts against Bosnians refugees are unfair. He chose to represent 18 Bosnian Serbs he believes did nothing wrong in the Bosnian war, including Spiric. Fourteen of those clients live in Phoenix, the rest in Las Vegas. Brelje says all of them have similar stories.

“They were ethnically cleansed by Muslims from Muslim-dominated areas,” Brelje says. “There was ethnic cleansing on all sides. They are refugees who are now being punished for something they didn’t do. And they are being labeled as war criminals. I guess that is the part that is particularly distressing to me.”

Brelje acknowledges in some other deportation cases against Bosnian Serbs, the US did present solid evidence that the defendants had participated in war crimes. In one case, a Bosnian Serb who the US deported from Massachusetts was convicted in a Bosnian court for his role in Srebrenica.

“I am 100 percent behind removing people from the United States who committed war crimes, who participated in persecution,” Brelje says. “On the other hand, we shouldn’t let the enormity of what happened there cloud our vision so that we can’t discriminate between those who actually did commit the war crimes and others who have very clear and consistent and credible stories about where they were and what had happened to them.”

ICE wouldn’t comment on individual deportation cases. But according to court documents in Spiric’s deportation case, the US government’s main evidence that Spiric may have been involved in the Srebrenica massacre is that his name is listed on the July 1995 roster for the militia’s First Infantry Battalion, Fifth Infantry Company of the Braturnac Light Infantry Brigade.

The government asserts that that is one of the battalions that assisted with the Srebrenica massacre.

But Spiric says he wasn’t even fighting that summer. He says he was institutionalized in a mental hospital after a nervous breakdown and had no clue about the mass killing.

His lawyers argue the militia’s roster confirms Spiric was on sick leave all summer. They say a small letter b that appeared next to Spiric’s name on the May through August rosters stood for the Serbian word ‘bolestan,’ which means sick.

An immigration judge’s opinion did not rule out the possibility that Spiric’s account could be true. But the judge concluded Spiric should be deported for lying on his refugee application. The judge found that not only had Spiric failed to disclose his time in the militia, but he also misrepresented when he fled Bosnia.

Harvard Law School professor Alex Whiting says these deportation cases are necessary to uphold the integrity of the US refugee system.

“People do not have a right to come into the country and fail to disclose relevant pertinent information that is required of them,” Whiting says.

For his part, Spiric says he was just following the advice of the refugee caseworker so his application to the US would be accepted. He says the International Organization on Migration caseworker filled out the application and he signed it.

Unless he can convince the immigration judge in a future hearing that deportation will cause too much harm to his son, who is a US citizen, Spiric will be sent back to Bosnia.

As he waits for resolution in his deportation case, Spiric wonders how he’ll ever clear his name from the stigma of being associated with Srebrenica. He says he feels he's been labeled a war criminal, even though he was never tried or convicted of committing a war crime.