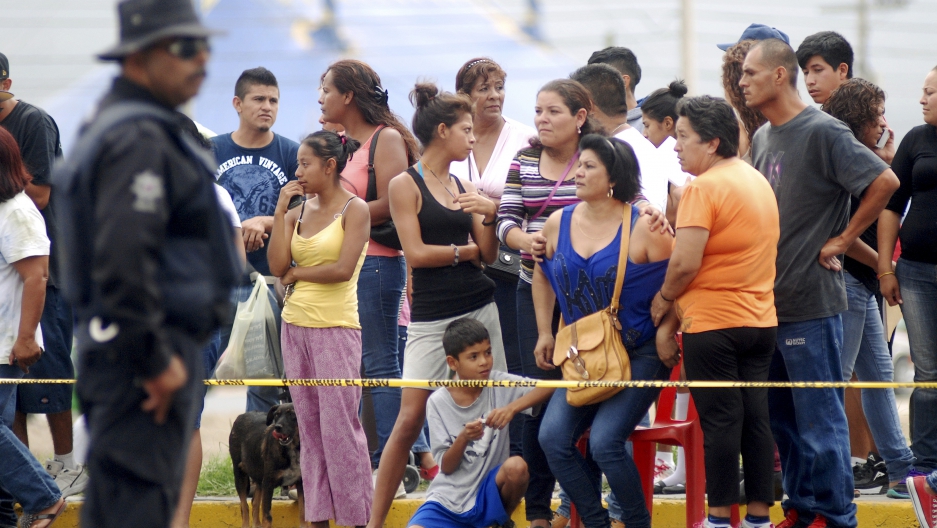 Onlookers stand behind a police cordon as a police officer stands guard at a crime scene in Garcia, on the outskirts of Monterrey, Mexico.

The Mexican government has trumpeted its successes in taking down major drug cartels. One would expect a subsequent decline in crime and homicide rates — but the opposite is happening.

Crime rates are increasing rapidly in certain regions of Mexico, including the southwest — the states of Guerrero, Michoacán and Jalisco, in particular — and the northeast, near the border with Texas.

Alejandro Hope, security and justice editor at El Daily Post in Mexico City, blames the so-called “kingpin strategy” — taking down major figures in organized crime — for leading to increased violence. "It creates succession fights," Hope says. "It leads to the fragmentation of the gangs, and ... it creates power vacuums where other gangs can move in.”

The smaller operations pose a more direct threat to the population: more homicides, kidnappings and extortion.

But these smallers organizations do have one key difference from the cartels they've replaced: Drugs. They are organized crime groups, not drug cartels. “Mexico is still a major drug bazaar, but increasingly that is no longer the driver of violence and disorder in the country,” Hope says.

But Hope says the government is refusing to recognize the problem: “Right now, they’re in full denial mode.” With the focus on advertising their successes, “they haven’t yet acknowledged that this upsurge is happening, so I don’t think there is a strategy to deal with it.”

“Police forces are under-trained, under-paid, under-motivated and still very vulnerable to corruption and intimidation,” Hope says. “What is needed is a consistent effort in institutional reform from the local level up.”

This increasingly dangerous climate doesn’t apply to everyone: “The risks you run depend on where you are geographically, and where you are socially.”