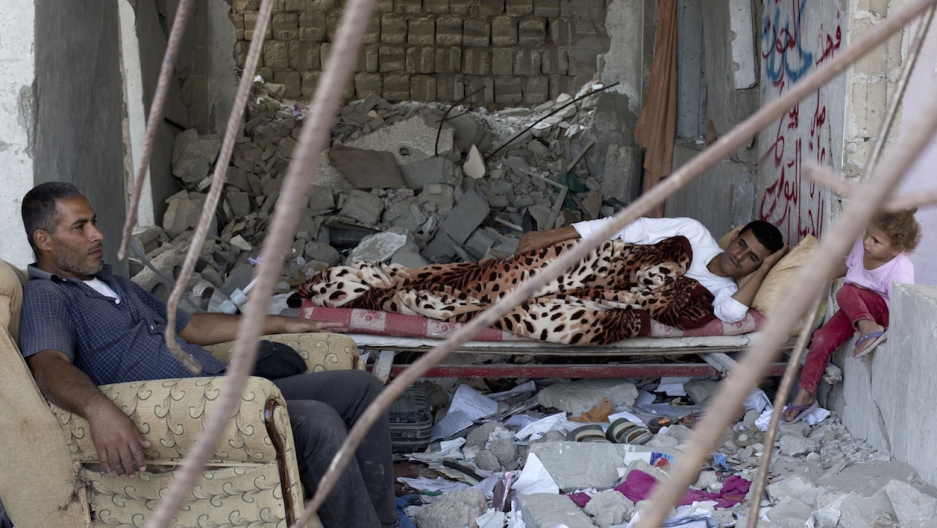 A Palestinian family rests in the al-Shejaeiya neighborhood on July 2, 2015, in the rubble of a building that was destroyed during the fighting between Israel and Hamas militants in 2014.
Credit: Mohammed Abed
Share

GAZA CITY, Gaza Strip — It’s been one year to the day since Israel launched Operation Protective Edge, a campaign against Hamas militants that became a bloody, massively destructive 51-day conflict in the Gaza Strip.

The final death toll when the weeks of fighting ended: 2,205 Gazans — mostly civilians, 521 of them children — and 73 on the Israeli side, seven of them civilians.

Most people you talk to here aren’t particularly aware of any anniversary, though. After all, they’ve been living with destruction and loss from the operation every day since. Today’s no different.

"Is it today? I thought it was a few days ago," Ali Wahdan, 36, said on Tuesday. Wahdan was a math teacher until he lost his leg in last summer's violence.

More from GlobalPost: Hundreds of kids died in Gaza’s war. The ones who survived are living a nightmare

Many of Gaza’s hardest hit neighborhoods look much as they did on the day the last bomb fell. About 100,000 Gazans remain homeless. Rebuilding efforts are strangled by the ongoing blockade, which prevents crucial supplies from being delivered. Much of the funding pledged by the international community last year has yet to be disbursed. Unemployment is at 40 percent overall, a record high, and at 60 percent among youth.

So what do Gazans have to say about their circumstances, and how to they feel about the year gone by? We’ve been talking to them to find out. Here are a few of their voices. "[My family's supermarket was] open during the war. Things were stolen of course. I prayed and I thought I would die. But it would have been alright to become a martyr. I wasn’t afraid. I would go home and come to work. If God had written it, I would have died. If not, I was not going to.

“Since the war nothing has progressed, we’ve gone backwards. People before the war had money to buy things. In the last year there are many more beggars. Their houses were destroyed. When beggars come we can’t say no to them, if they don’t have money we give them things anyway. It’s Ramadan. In normal times if people look really badly off we help them. Sometimes people take things saying they’ll pay for it later. Often they don’t come back because they’re embarrassed they can’t pay.

“There’s no progress, no hope, all of Gaza is living on the edge. But no Muslim dies from hunger.

“People come often to ask for work. I don’t have any for them. It’s impossible to plan for the future when all of people’s income goes to food.” Wahdan was a math teacher before the war. He lost his wife and his left leg in the shelling. His house was bombed. Doctors tell him they will have to amputate his right leg now, too.

“On the first day of the war, my son was having an operation. When I left the hospital there was shelling. I stayed in the house for 20 days. [Then] when my brother was injured I went to the hospital with him.

"A week after he left the hospital, my house was bombed. We were in it. The girls were in their room, my brother’s sons were on the roof, there were about 30 of us in the house. We were on the veranda. We lost the girls, my wife, my brother’s son’s wife. From one day to the next my life changed. I was normal. Now I can’t do anything. When I get up two people have to help me. Two months ago I made a request from the Israeli authorities to go to Israel for treatment; I got no response. The appointment was today.

"My second leg is going to be amputated. After they take my second leg they say maybe I can get a prosthetic." Al-Kas is an ambulance driver and father of seven.

"But 2014 was different. Our lives were threatened. The shooting didn’t stop even when they saw the medical sign. They knew we were there. We would take two cars, three at night with lights so that the airplanes would know we were medical services. ... We would use the big main roads so we would be seen. Nevertheless, two young ambulance drivers were killed. On the day of the massacre in Shejaiya I was injured in the back. I still don’t like to drive past that place. When we arrived they saw the sign and they kept shooting.

"When someone older than 20 is killed, at least they have lived even a small part of life. But a child, they don’t know anything about life, that’s the hardest thing. I’m still explaining life to them [my children]. In the moment you are focused and working but it’s the moment when you sit and imagine, when you picked up the corpses of small children, at any moment you feel that it could be your child. When we had to leave our house I distributed my children among three different houses so that if one was hit, at least others would be left alive. If you put them all in one house and that house is hit, your name could be erased forever."

"I teach my children about all the things that have happened. My son wants to be a doctor."

"I used to spend long hours at work. Now I spend a lot of time with my children so that if it gets worse, if I lose one, at least there will be memories. I teach my children what death is, how it will be when we meet again. I’m raising a generation that will not stay silent about the situation here. A day has to come when we can live. Not just breathing and eating and drinking but life with all of its meanings to old and young." Haniya lost nearly all her relatives: her son, his wife and two daughters, and her daughter.

"God is better than money, they can have the whole world if they just could have left me my son. And his wife, she was so pregnant, we were about to take her to the hospital any day. I have no picture of her. But she was beautiful, like my son.

"They had come to visit on the first day of Eid. My son lived in an apartment building a ways away. He said, 'I want to come and break the fast at your house.' They came. The girls had gone to get the tea. My nephews were talking and laughing outside the house. After dinner I said to take the little girls home but my daughter said, ‘No, let them stay here. What will happen to you will happen to us, we are not better than you are.’ I said I wanted to sleep. The little one was right here, the other was sleeping over there. Then the explosion. I didn’t feel anything.

"And then I remember there was concrete and dust everywhere. My head was cut and people came to take us to the hospital. On the second day they told me my family was dead. My son’s apartment is locked now. My older brother is the only one that’s left. I stay in the house mostly. Where would I go?" Al-Modallal is a journalist and activist.

"The war was a nightmare. We lost everything. We lost our humanity. In 2008 and 2012 after the wars finished we felt a lot of solidarity from the rest of the world. Every day there were delegations and support, funding for projects. 2012 was the Morsi period in Egypt and lots of people came in solidarity with us from all over the world via Egypt. That made the war easier for us. ... With funding from outside we built new streets and villages. This year, since the Rafah border with Egypt is closed, there are no delegations. You can’t have this kind of solidarity coming through Erez [the crossing with Israel]. That border is controlled by the Israelis and they can stop people like that from supporting Palestinians. The damage is worse and worse. Factories, the environment, everything was affected by what happened."

"I am tired of telling the same story, the same narrative, I feel mad and angry that people do not understand us. I don’t even need them to be in solidarity with us or be empathetic for us. We just need the world to understand that this is an issue of justice and freedom." AbdAlati is the manager in the Gaza Strip for the Palestinian Center for Policy Research and Strategic Studies.

"It was a scale of violence we hadn’t seen before. They left nothing. 17 journalists were killed. 36 were injured. They were targeted, because they were telling the truth. Their cars, their offices were destroyed.

"The war made everyone scared. Even when they were sleeping. This war was distinguished by the pain that it caused. They bombed buildings without warning or reason, buildings that were residential. Whole families were wiped out. At most people had 10 minutes of warning. In a moment they destroyed all the dreams a person has. The elderly, women and children make up half of the dead. We felt we were not human, we lost big parts of ourselves. We’ve lost our trust in the world."

"The rich became poor, the poor became destitute. Every Gazan has a thousand stories."