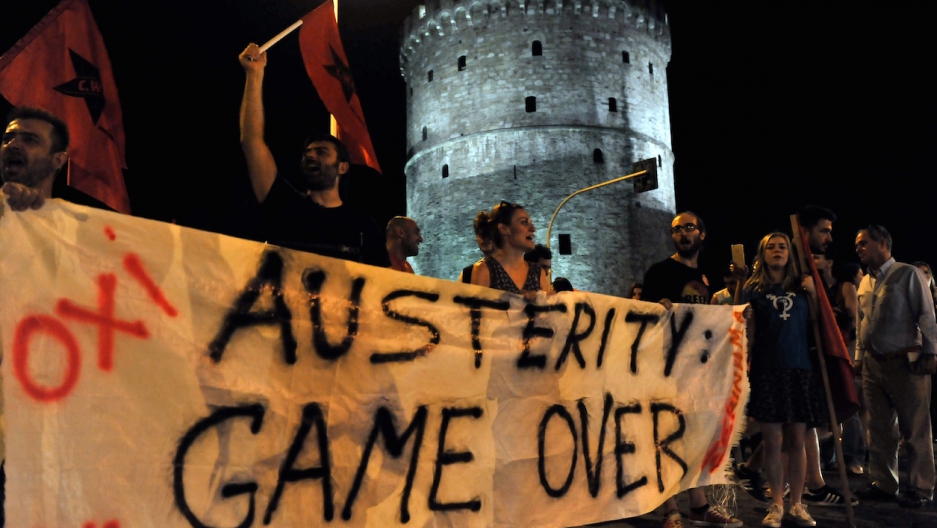 Όχι. Nein. Non. No. Whichever language you speak, Greek voters said it loud enough for the whole of Europe to understand: they will not accept yet more austerity in exchange for yet more loans from their international creditors.

This was not a “not sure,” a “maybe later” or even a “thanks but no thanks.” With 61.3 percent against compared to 38.7 percent for, the answer to Greece’s referendum on the terms of an international bailout was a resounding and defiant “absolutely not.”

Pro-no Prime Minister Alexis Tsipras called it a “brave choice.” His counterparts in the rest of the euro zone are no doubt calling it something else behind closed doors, but in public at least, German Chancellor Angela Merkel and French President Francois Hollande have said the will of the Greek people must “be respected.” All over Europe, a flurry of crisis talks are taking place today to try to thrash out a joint response. We’ll see what they come up with at an emergency euro zone summit tomorrow.

Sure, creditors might feel a little rejected. But Greece’s far-left government wants its single-currency partners to know that it’s not them, it’s their lending conditions. According to firebrand Finance Minister Yanis Varoufakis, if Greeks said no to the euro zone’s “iron cage,” they said “a big yes to democratic Europe.” In which spirit, Varoufakis has resigned — despite getting the result he campaigned for — to allow cooler heads (and smaller mouths) than his to return to the negotiating table.

Tspiras says they’ll be doing so pronto. But what if the European Union says, no really does mean no? Is there life for Greece after the EU? That one’s a yes. Here’s what it might look like.

Nigeria is a dangerous place to be a Muslim right now. At least 44 people have died and more are injured after two bombs exploded in the central city of Jos last night — one in a mosque where an influential moderate imam was leading evening prayers, and another in a restaurant where people observing Ramadan had just sat down to their first meal of the day.

The bloody Sunday ended a bloody week in which as many as 200 people were killed across the country in bomb and gun attacks. No one has claimed responsibility for the slaughter in Jos, but the most obvious culprit is Boko Haram, the Islamist militant group that has wreaked terror across northeast Nigeria for over a decade despite successive military crackdowns.

The country’s president of a month, Muhammadu Buhari, has called the spate of killings “the last desperate acts of fleeing agents of terrorism.” He hopes: he was elected largely on his promise finally to defeat Boko Haram and, with reinforcements from Nigeria’s neighbors, seems to be edging toward delivering. But even “last desperate acts” have a nasty way of costing a whole lot of lives.

For a country that isn’t meant to like soccer, the US is pretty good at it. The best, in fact, when it comes to women: Team USA yesterday beat reigning champions Japan to win the Women’s World Cup. Did we say “beat”? It was more than that. The US scored five goals to Japan’s two, four of them within the first 16 minutes and three of them by just one player, record-breaking midfielder Carli Lloyd. What’s more, with three Women’s World Cups to its name, ‘Murica is now officially the winner-iest country in the tournament’s history.

This, just a couple months after the US Justice Department began busting some major soccer balls at the sports-themed kleptocracy — allegedly — that is FIFA.

Football’s coming home? No sir ma’am: it’s traveling the world, changing its name, making a bunch of new friends and frankly, having a (ahem) ball.

P.S. Want to know what the World Cup warriors are going home to? Here’s how the competing countries treat women when they’re not on the pitch.