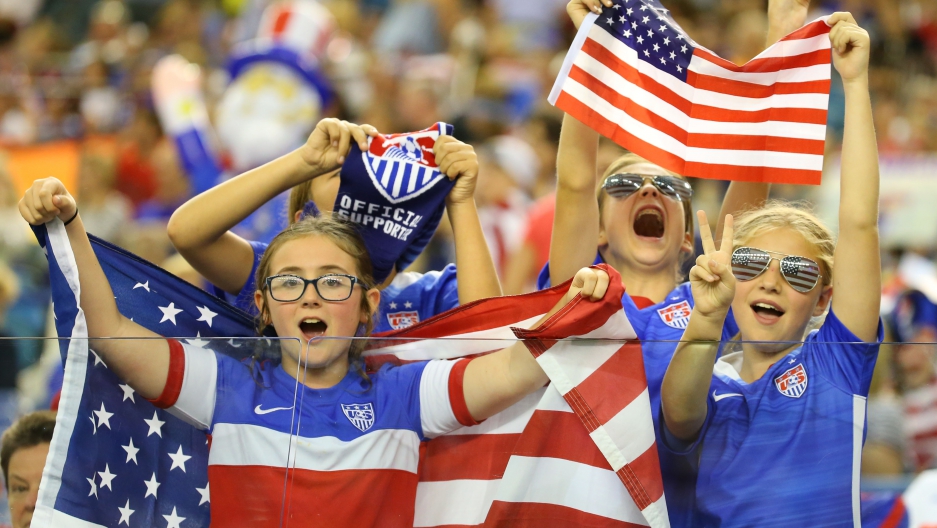 Young United States fans in the stands of the FIFA 2015 Women's World Cup cheer on their team.

You'd think the rise of Carli Lloyd and Abby Wambach would herald a bigger, better-trained class of US women.

You would be wrong.

"Without a doubt you see the proof that big events like this affect girls' participation in sports," says Deborah Slaner Larkin, CEO of the Women's Sports Foundation, speaking about the American women's World Cup victory. "Young girls are seeing these female athletes on TV, seeing their mothers playing sports, and having their mothers playing with them. It's really a culture shift."

But the stats show that the enthusiasm has its limits. A 2012 report by the foundation determined that girls in US high schools have consistently fewer athletic opportunities than their male counterparts.

The size of this gender gap varied depending on economic resources available to the school, the type of neighborhood the school was in (rural, suburban, urban,) the region of the country, and the tier. Opportunities were lower for students in urban communities and especially lower-income schools. But across all variables, a gender gap in opportunities available to girls remained constant. Girls had and continue to have fewer athletic opportunities across the US.

The statistics for younger children show the same gap. According to a Report on Trends and Participation in Organized Youth Sports, in 2002, 54 percent of all American children aged 6 to 17 played on at least one organized sports team. However, girls made up only 44 percent of all organized sports team members. Girls’ participation in youth sport even decreased slightly from 1997 to 2008, from 37 percent to 34.

Larkin explains this drop: "These girls who are not getting opportunities are girls of color, especially African-American and Hispanic girls. Which is why we're working to get these girls the opportunity, not just to be on TV, but because research shows incredible education and health benefits for girls who play sports." Between ages 16 and 17, 56 percent of African-American girls reported they had no regular leisure-time physical activity while only and 31 percent of white girls reported the same. "We don't want these girls to be left behind," Said Larkin.

The US women's soccer team also won the World Cup in 1999. And in 1999, 7.3 million US females aged 6 and older participated in soccer, a 20 percent increase from 6.06 million participants reported in 1987. Larkin is confident the US will see this bump again: "We won in 1999, and 16 years later we have such a large pool of girls playing, it's no surprise."

More on the the sports gender gap, but in terms of pay: