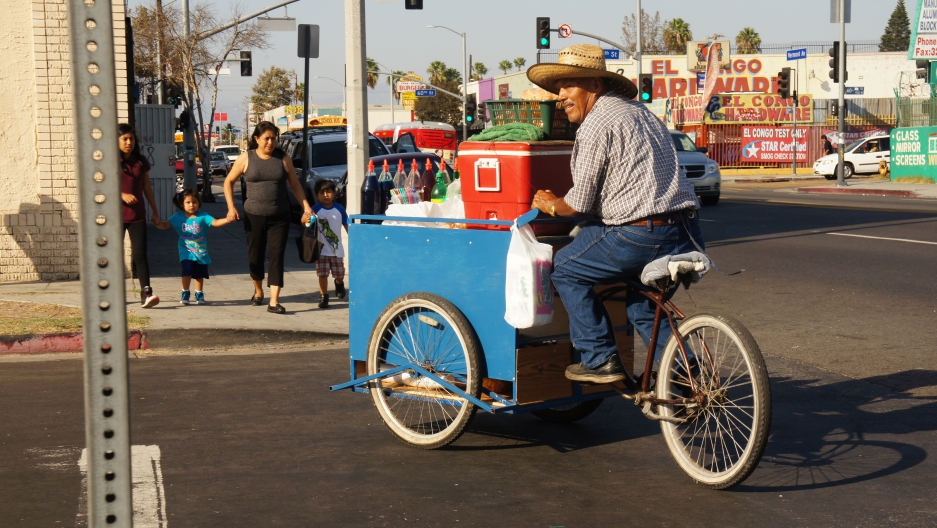 A vendor navigates his cart through the streets of South LA. Subject to fines and the possible confiscation of their equipment, LA’s street vendors often play a cat-and-mouse game with police.

Although you see it all over the city, sidewalk vending in Los Angeles is prohibited. That’s now under debate, considering the city’s large population of vendors — numbering between 10,000 and 50,000. Many are immigrants, hawking everything from fruit salads to tacos to bacon-wrapped hot dogs from stainless-steel carts. Their work touches on such issues as entrepreneurship, business fairness and how best to use public space in the city. 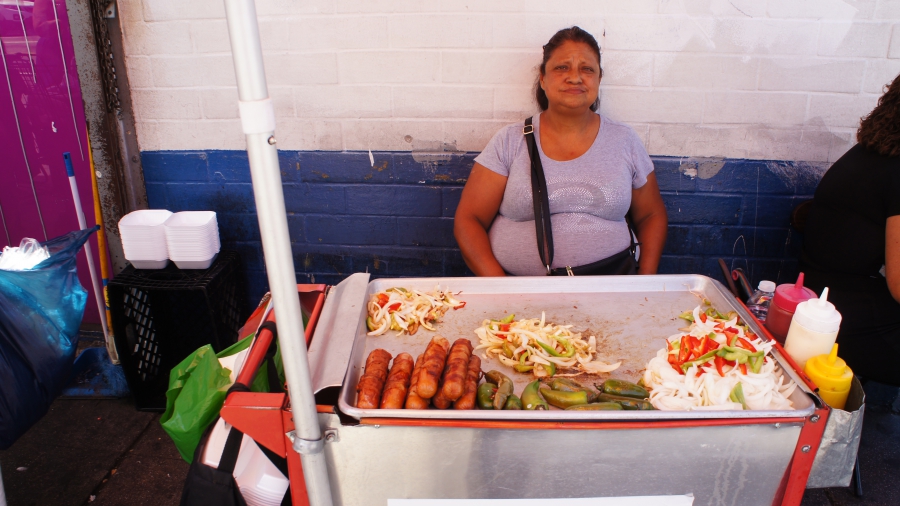 Los Angeles is known for its gourmet food trucks scene. But unlike the trucks, LA’s sidewalk vendors are prohibited from selling food and other goods.

Siding with the vendors is Rudy Espinosa, who runs Leadership for Urban Renewal Network, a non-profit that advocates for L.A.’s sidewalk sellers. He tracks how the vendors are fined, how they have accused city officials of confiscating their equipment without warning and how some vendors have been arrested. “We have criminalized vendors in the city of Los Angeles,” he says.

These realities have convinced street vendors like Luis, who doesn’t want his last name used, to play a cat-and-mouse game with the police. He’s from Guatemala and sells fruit on the sidewalk in L.A.’s MacArthur park neighborhood.

“I’m hustling right now,” he says. “As soon as I see the cops, I’ve got to run. I already got four tickets. I already did, like, 21 days of community service. It’s not an easy thing to do. Everybody right here has to hustle.”

But even as they sell their food and try to avoid police stops and fines — which can reach a $1,000 — street vendors are now raising their voices to fight for the legalization of their businesses. And the city is taking notice. 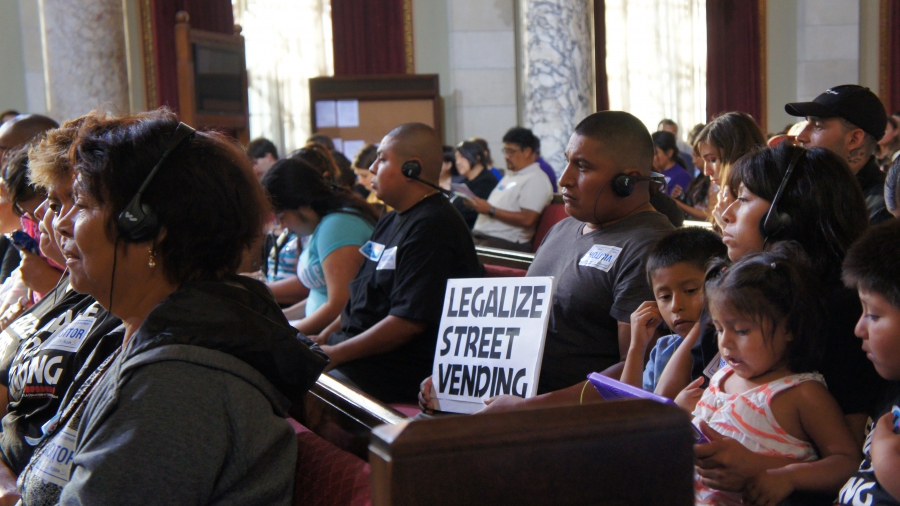 Los Angeles' street vendors are organizing to fight for the legalization of their businesses in the city. Here, street vendors pack LA’s City Hall to speak before city officials who are considering legalizing their trade.

LA is holding community meetings to get public input on ways to possibly legalize sidewalk vending. At a recent, standing-room-only forum at City Hall, I meet Anna Maria Gil, who sells bread and pastries from her cart in LA’s San Fernando Valley. She says she trekked to City Hall after a long day at work.

“It’s urgent that LA legalizes sidewalk vendors,” she says. It’s work that supports families, she says, including her ability to support her three kids through college.

But as they seek legalization of their businesses, sidewalk vendors have opponents — including other immigrant entrepreneurs.

“Actually sometimes when I see them, I definitely remember those days when I came to this country,” says Michael Zarrabian, originally from Iran, and who now runs a small restaurant in an LA neighborhood popular with sidewalk vendors. He sympathizes with the vendors, but has organized with other merchants to fight the legalization of sidewalk vending.

He says they operate on a different — and unfair — playing field “because they don’t have all the expenses that we have from permits, the health department, workers’ comp, insurance. They don’t pay that, so they are able to sell their product 30, 40 sometimes 50 percent cheaper than us,” he says.

But the sidewalk vendors and their supporters say legalization of vending would remedy many of these problems. Vendors would have to get business licenses licenses and be subject to taxes and health inspections.

“We have this rhetoric all the time of the small business owner and the entrepreneur and the hard working person,” says Espinosa. “These street vendors fit that profile. These are people that are saying this is the American dream. These are people who are saying I am not going to take a handout. I am going to try to create something. We have to help these folks. There are so many of them. It’s silly for us to shut them out.”

L.A. officials are expected to decide whether to legalize sidewalk vending in the coming months. Until then, the vendors will continue to cook, sell and try to remain both in the shadows and in plain sight. 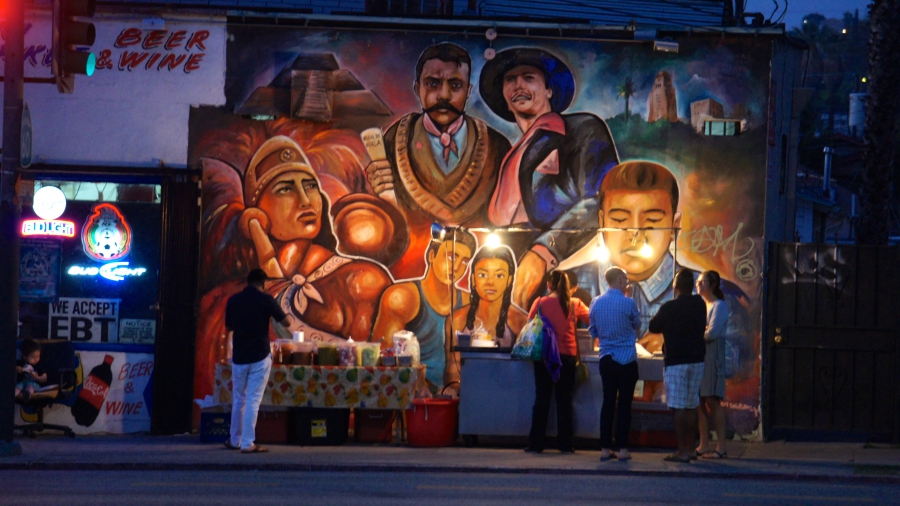 LA’s sidewalk vendors set up kitchens to cook their food. Supporters say they’re providing for their families and that they make LA's street life more vibrant. Many owners of brick-and-mortar businesses say the vendors represent unfair competition because they don't have to pay the same business expenses.