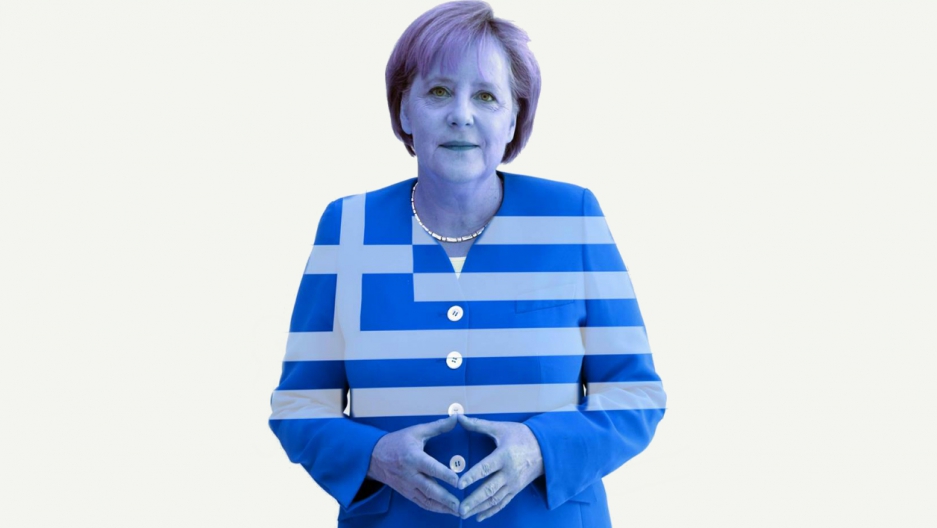 AYLSHAM, England — Greece’s resounding referendum vote against fresh European bailout terms represents a massive rejection of the German-inspired austerity policies that have squeezed European economies for the past six years.

You might say German Chancellor Angela Merkel played a big part getting Greece into this mess. It’s also Merkel who will have the ultimate say over the future of Greece — and of the euro zone economic bloc.

The reason is brutally simple: Any European plan to keep the Greek economy afloat will have to be underpinned by German money.

That gives Merkel a huge dilemma.

Without help, Greece will be bankrupt before the end of the month.

She could keep insisting Greece tightens finances in return for more handouts. That will almost certainly force Greece out of the euro zone and into bankruptcy — unless Greek Prime Minister Alexis Tsipras decides to ignore Sunday’s referendum result and accept a new dose of austerity.

Alternatively, the chancellor could make major concessions to Tsipras’ leftist agenda — like forgiving a big slice of Greece’s $347 billion debt and accepting his premise that hiking taxes on business is the best way to revive the economy.

If she follows that path, Merkel will likely trigger a rebellion among her center-right supporters in Germany and the austerity-minded governments that make up the majority in the 19-nation euro zone.

The move could also — as Merkel herself has frequently said — undermine the rules on which the euro zone is based, sowing Greek-style crises elsewhere in Europe, but on an even bigger scale.

If Tsipras and his Syriza party’s confrontational tactics are seen winning concessions from Germany, voters in Spanish and Portuguese elections scheduled for later this year would gain a clear incentive to vote for similar hard-left groups.

Leftists partied around Europe on Sunday night to celebrate Greece flipping the bird to Merkel by voting 61 to 39 percent against the bailout deal. More than 6 million Greeks went to the polls. But there's not a whole lot else to celebrate. Greek banks have been closed for a week to keep scared citizens from running with their money; there are reports of shortages of medicines and other imported goods as international traders refuse to accept Greek credit; a meeting of the European Central Bank Monday could decide to cut off the supply of cash to Greek banks.

Without help, the country will be bankrupt before the end of the month.

Merkel is flying to Paris late Monday for talks with French President Francois Hollande — who is more sympathetic to the idea of easing up on austerity terms for Greece. A Tuesday summit of euro zone leaders in Brussels could be decisive.

Some countries have shown willingness to compromise.

Italian Prime Minister Matteo Renzi called for a solution that looks beyond austerity. French Finance Minister Michel Sapin said restructuring Greek debt should not be “taboo” in the coming talks. His Spanish counterpart Luis de Guindos was open to another bailout for Greece and insisted the country could be kept inside the euro-zone — if it respects the rules.

But there’s little sign of flexibility from Germany, where there is widespread distrust of Tsipras. A Finance Ministry spokesman in Berlin said a Greek debt write down was not on Germany’s agenda.

In the end, the negotiations will depend on how much Germany wants to keep Greece in the euro. A sign outside the Bank of Greece in Athens is defaced with graffiti to read 'Bank of Merkel' on July 6, 2015.

Influential German politicians, media and — according to polls — most of the German public now see a “Grexit” as the best solution.

“The country and the government [of Greece] have pushed away the helping hand,” Markus Weber, a European Parliament member from Merkel’s center-right alliance, told the news magazine Spiegel. “The only chance for Greece now is to leave the euro.”

Merkel, however, must be aware of the risks. As well as costing Germany $77 billion in lost loans, financial collapse in Greece could create a failed state on Europe’s periphery. A strategic NATO ally would be undermined with the danger it could slide into political instability, or into Russia’s embrace.

Russian President Vladimir Putin issued a statement of support to Greece on Monday, saying Tsipras had called him to discuss the “further development of Russian-Greek cooperation.”

Merkel’s major miscalculation throughout the crisis has been to underestimate the political consequences of economic decisions.

Her insistence on austerity at any cost has seen voters in Greece — but also in Spain, Italy, France and elsewhere — turn away from the pro-European parties of the democratic mainstream to seek alternatives on the far-left or extreme right.

For Greece, Europe and the world economy, the stakes could hardly be higher as Merkel decides her next moves.