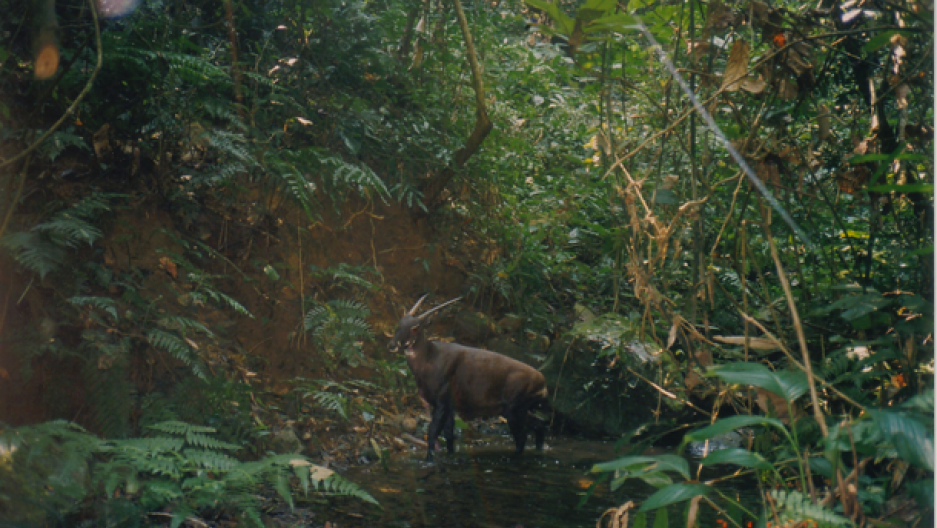 A camera trap caught this image of a saola, which may have been pregnant, in 1999

Deep in the forests of Southeast Asia lives a creature called the saola. In profile, it looks like a unicorn — and it’s almost as rare as that mythical beast. Little is known about it, except that it and its habitat is quickly disappearing.

Writer William deBuys accompanied conservationists on an expedition to study the saola. From his travels emerged a new book, called "The Last Unicorn," which chronicles their quest for the saola in the jungles of Laos, examines the challenges of saving a rare species and ruminates on what else he learned along the way.

The saola was discovered by Western science in 1992, but local villagers in the saola’s habitat in the jungles of Laos have, of course, always known it was there. What they didn’t know is that the saola exists only in this small corner of the world.

“Its nearest relatives, in evolutionary terms, are wild cattle,” deBuys explains, “but they're really not very close relatives. The saola seems to have branched off the evolutionary tree quite on its own a very, very long time ago.”

The saola’s nickname derives from its distinctive horns. “They're long, almost straight, and beautifully tapered to a very sharp point, so that when the saola stands profile, the two horns in perspective merge into one, and it appears to have only one horn — it appears to be a unicorn,” DeBuys says.

The expedition basically had three purposes, deBuys explains: To look for saola habitat and for saola in that habitat; to evaluate the poaching pressure on the landscape; and to conduct a kind of “conservation diplomacy” in the villages of the forest. “We talked to headmen in the villages and to groups of elders about ways that hunting might be reformed in order to protect any saola that might be there,” he says.

DeBuys’ book isn't just a rallying cry to save a particular species. It examines the broader cultural economic pressures in the forests of Southeast Asia, a land undergoing great change. “Manufactured goods are filtering into the remote villages deep in the forest, and the pressures of poaching are rising year-by-year,” deBuys says. “As economies expand, as consumer culture penetrates areas where it never has been before, the pressures on the forest are really intense.”

He says the closest parallel is the American West in the early part of its history. “I was struck, when I was in Laos, with the plight of people who a generation or two ago were nomadic, and who have been settled in the same way that Native Americans in the US West were settled on reservations,” deBuys explains. “When nomadic people are forced to settle down,” he says, “they have to eat new foods, they have to change their ways, they lose contact with the spirits of their ancestors and their belief systems. They suffer heartbreak, they get sick, they're more vulnerable to disease, they have to encounter new manufactured goods.”

One of the other parallels, was “the sense that a war on nature was going on,” deBuys says. “In the 19th-century American West, we were losing the beaver from the streams, we were losing bison, the mountain sheep and elk were being decimated, etc. That same kind of loss of wildlife is going on in much of the forests of Asia right now.”

Species diversity in Southeast Asia is as high or higher than in any other part of the world, deBuys says. There are more endemic species — that is, species that occur only there — than in other parts of the world, and a higher proportion of these species are threatened with extinction.

Fortunately, immense amounts of the forest are still truly wild. “If the government of Laos and other interested parties are able to provide the protection against poachers that these forests need, their potential to repopulate themselves with wildlife is very, very high,” deBuys says. “There’s an enormous amount still to save there.”

For deBuys, the expeditions were a kind of quest. “As with a lot of quests,” he says, “we didn't find what we set out to find, but we found something else. We found an encounter with deep beauty.”

DeBuys adds that he also found a "psychological and spiritual space in which optimism and fatalism became recognized. This is really the story of the book, and it's the story of the expedition for me.”