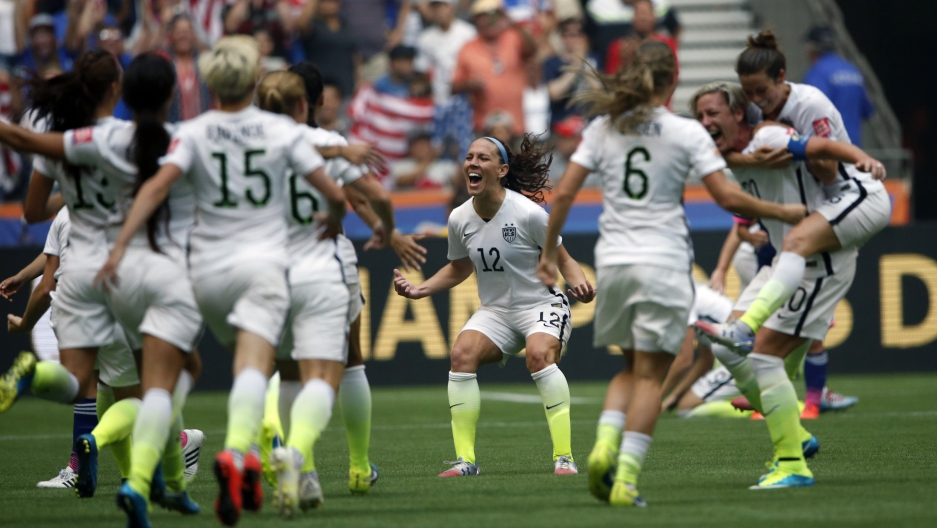 The US women's national team celebrates after winning the World Cup on Sunday night, defeating Japan 5-2 on three quick goals by Carli Lloyd.

Ratings show the championship victory Sunday night shattered previous US viewing audiences for soccer — male or female. The early ratings reinforce the point that the future of world soccer will inexorably have a greater female emphasis. FOX clobbered its Sunday night competition, with more than 20 million viewers watching the electrifying World Cup victory, the first for the team since the days of Mia Hamm and Brandi Chastain in 1999.

Nearly three-quarters of that audience stayed for a half-hour postgame show, a stunner for TV programmers. The audience was nearly double that of Tuesday's primetime US semifinal with Germany and a third bigger than the women's World Cup final in 2011. The closest men's match? The US vs. Portugal last year in the World Cup in Brazil.

But then came the knockout news about the prizes the new women's championship team would get: $2 million, far from the $35 million Germany's men's team got for winning last year's World Cup in Brazil. Over the next four years, according to one report, FIFA will spend just $22 million to develop women's and girls' soccer and $900 million to develop men's and boys' soccer.

"I don't know if 'insulted' is the right word, but the players definitely take notice," says sportwriter Joanne Gerstner. "Like it or not, our paychecks are kind of a ratification of our status."

Gerstner notes the women's championship payout is double that of the 2011 champs. "There is definite progress, but the rate of progress is slow," says Gerstner. "Yet I'm really encouraged to see people enjoying the sport for what it is. Once is was like, 'Hey look, there's a bunch of girls playing soccer isn't that cool. Now it's like, 'The US women's team is good!'"

The victory, said coach Jill Ellis, was for an audience much bigger than the team or its longtime fans, referencing women soccer's increasing popularity, particularly among the young. "I'm so happy for every little girl who dreams about this," Ellis said, moments after the match.

Lloyd, the first American to score three goals ever in a final, said she and the team were on a mission. Japan beat the US in the 2011 tournament final, but the US beat the Japanese in the 2012 Olympics, with Lloyd scoring both US goals in that 2-1 victory.

Lloyd's performance on Sunday night — one goal in the third minute of play, another in the fifth and another in the 16th minute — electrified social media. "We just wrote history today and brought this trophy home," Lloyd said later.

What a win for Team USA! Great game @CarliLloyd! Your country is so proud of all of you. Come visit the White House with the World Cup soon.

Lloyd said she had dreamed, months earlier, that she would score four goals in the World Cup final. But for a missed header, her dream could have come true. At 32, and with a fresh endorsement deal from Visa and the eyes of the nation upon her, she may be back for another World Cup, a leader in her own right.

The match also carried another significance for coach Ellis, Abby Wambach and Megan Rapinoe, who are openly gay. It came on the heels of the Supreme Court decision enshrining single-sex marriage as the law of the land. After the victory, FoxSports showed Wambach heading to the stands, where she kissed her spouse, Sarah Huffman.

ABBY WAMBACH KISSING HER WIFE, A UNION NOW RECOGNIZED THROUGHOUT THE USA, IS A PRETTY NICE ENDING TO THIS WORLD CUP https://t.co/1nfhQxGY38