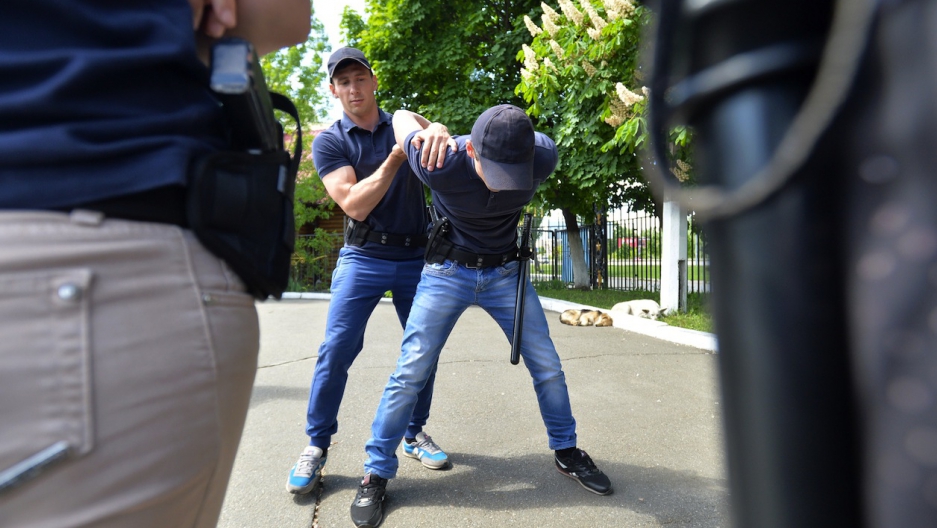 A Ukrainian police cadet practices new skills during a training session with US instructors in Kyiv on May 16, 2015. Ukraine is in the midst of overhauling its notoriously corrupt police force.
Credit: GENYA SAVILOV
Share

KYIV, Ukraine — When Ukrainian Interior Minister Arsen Avakov visited the southern region of Mykolaiv on Wednesday, he showed up with some unpleasant news.

In one fell swoop, he fired the region’s entire traffic police staff — more than 300 officers — and announced that anyone who wants their job back will have to pass inspection first.

It couldn’t have come as a total shock, though.

Ukraine is in the midst of overhauling its notoriously corrupt police force, known mainly for its dismal levels of trust among ordinary Ukrainians. According to a recent poll by the respected Razumkov Center think tank, only 24 percent of Ukrainians trust the police.

As a separate force, the traffic police have faced a large share of criticism, thanks to their predatory bribe-seeking from drivers and often ambiguous administrative responsibilities.

That’s why they’re being phased out completely and gradually replaced by a Western-trained patrol force.

It’s the first step of a broader reform of the Interior Ministry, the basis of which is a series of draft laws aimed at transforming the way police function in Ukraine.

The testing ground for the new patrol force will be in Kyiv, where freshly trained beat cops will hit the streets on Saturday. Other major cities will follow suit later this year.

Meanwhile Mykolaiv has gotten a particularly bad rap lately, making it a sort of poster child for police corruption in Ukraine.

Shortly before Avakov’s arrival this week, a local activist filmed what he claimed were traffic cops collecting dozens of bribes from truck drivers within a few hours — at one checkpoint alone.

Just two years ago, the otherwise unremarkable region made international headlines when a local woman was raped and beaten by two well-connected policemen.

Besides soliciting bribes, cops in Ukraine have also been known for impunity and providing cover for their bosses.

Some might be inclined to paint Avakov’s bold move in Mykolaiv as a populist ploy. But Ivan Varchenko, an advisor to the minister, says it needed to be done.

“For more than a year and a half, they were given signals [from the ministry],” he told GlobalPost. “These signals were not heard, and the proper steps were taken in regard to the Mykolaiv traffic police.”

Police reform has been one of Ukraine’s top priorities since last year’s pro-democratic uprising, dubbed the “Revolution of Dignity.”

Kyiv’s new patrol force cadres — about 2,000 officers — were plucked from a pool of more than 30,000 qualified applicants. Subjected to rigorous training and higher standards, the fresh-faced recruits will also be paid more than their predecessors.

Meager salaries have previously fueled the rampant corruption, which in turn attracted those looking to make a quick buck. Just becoming a traffic cop would cost a candidate some serious cash or a well-placed sponsor.

Oksana Markieieva, a Kyiv-based expert on security and police reform, says the wide range of administrative services provided by the old traffic police — such as handing out various permits — left ample room for bribe-taking.

“Traditionally, it is the provision of these services that is most profitable,” she said.

Most Ukrainians hope that'll soon be a thing of the past.

In an effort to boost their public image, the officers have also been given snazzy new uniforms, which Avakov personally unveiled on Wednesday.

A spirit of democracy even colored the selection process for new squad cars: earlier this year, locals were able to vote for their favorite design in downtown Kyiv.

But only a concerted effort by the new patrol police to protect the public — not extort them —  will demonstrate their true worth, most observers agree.

Interior Ministry advisor Varchenko says he knows the transition won’t be easy, given society’s deep-seated perception of the police.

But he remains optimistic.

“Ukrainian policemen will simply have to be the best part of society,” he said.