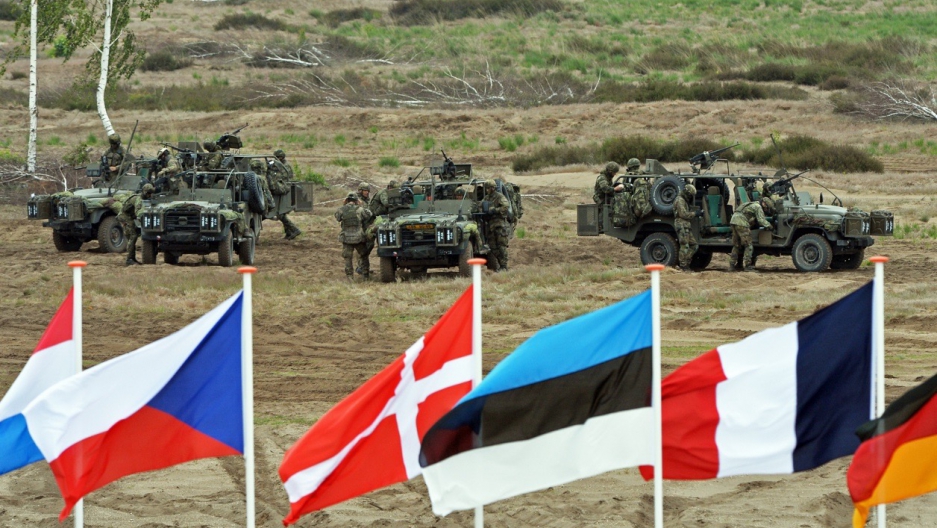 COPENHAGEN, Denmark — It took until 10 a.m. on the third day of NATO’s annual naval exercise in the Baltic Sea before Sgt. Maj. Lasse Jensen picked up traces of the Russian spy plane he had been expecting.

The moment it appeared, he began scrutinizing its movement on his three computer screens at Denmark’s radar station on the easterly island of Bornholm.

“When you get a lot of big ships gathered in a small area, we expect to see some activity. It’s normal,” Jensen said as he tracked the plane earlier this month.

The military exercises known as Baltic Operations, or Baltops for short, was this year a major show of strength for NATO, with 49 naval vessels from 17 countries and 5,900 personnel taking part in an exercise that culminated in a beach landing just 100 kilometers from the Russian enclave of Kaliningrad.

Not to be outdone, Russia responded. Russian ships came within a mile of a US flotilla participating in the exercise. And NATO jets based in Estonia were scrambled five times during the exercise to ward off oncoming Russian aircraft.

All this back and forth aggression pales in comparison to what Jensen witnessed a year ago, however. Last June he saw two Russian bombers and four fighter planes bearing down on his radar station in battle formation.

“It was a simulated attack, probably on this station,” he said. “That was the course they were following. We were the only thing that could have been the target.”

It was a disturbing demonstration from the Russians. When the Danish military reported the event later that year it caused a sensation. Its timing had coincided with a Danish political festival. Some 90,000 politicians, journalists, lobbyists and other citizens, including Prime Minister Helle Thorning-Schmidt, were on the island at the time of the dummy strike.

Whether it was intended as a threat or not, the drill was just one of a growing number of similar Russian exercises that — together with increased military flights (including some serious violations of airspace), naval and submarine activity — have pushed fear and suspicion of Russia across Denmark, Sweden, Finland and Norway to levels unseen since the Cold War.

According to "The Coming Storm," a Baltic Sea security report released by the Centre for European Policy Analysis (CEPA), Russia launched a bold snap exercise involving 33,000 troops in March.

“The scenario included the speedy seizure of northern Norway, the Åland islands, the Swedish island of Gotland and the Danish island of Bornholm,” the report claimed. “If carried out successfully, control of those territories would make it all but impossible for NATO allies to reinforce the Baltic states.”

For Denmark, the far-flung and strategic island of Bornholm has long been a front line.

The Russian military is challenging us along our borders and there have been several border infringements in the Baltics.

Max Ellegaard Hansen, Jensen’s commanding officer, said that under declassified Soviet-era plans for war in Europe, the radar station on Bornholm would have lasted only a matter of hours.

“Our radar would be one of the first things taken out: by a tactical nuke, that’s what their plans said. The first thing you should do is shut off the eyes of your enemy. We were the eyes to the East, so it would have been the natural thing to do,” Hansen said.

He laughs to think that only a few years ago he spent an evening during a Baltops exercise drinking vodka with Russian officers who had come to the island to take part.

“It was only six years ago, we had Russian landing ships coming into Nexø harbor,” he said. “They were even exchanging weapons on the shooting ground. It’s quite a change that has happened.”

Soon after the huge March military exercise by the Russians, Denmark, Sweden, Norway, and Finland struck a defense deal. They included in the announcement a harsh statement aimed at Russia.

“Russia’s leaders have shown that they are prepared to make practical and effective use of military means in order to reach their political goals, even when this involves violating principles of international law,” the ministers wrote, referencing Russian’s annexation of Crimea and its support of pro-Russian militias in eastern Ukraine.

“There is increasing military and intelligence activity in the Baltics and in our northern areas. The Russian military is challenging us along our borders and there have been several border infringements in the Baltics.”

According to CEPA, however, the Baltic and Nordic countries remain woefully unprepared.

“The central message of this report is that if the region’s security is not improved, NATO, the world’s most successful military alliance, could be revealed as powerless, perhaps without even a shot being fired,” it reads.

“An operation in the Baltic Sea region (for example, seizing the Swedish island of Gotland),” it continues, “could be mounted rapidly and effectively. It would also be possible to invade one of the Baltic states and reach the coast within a matter of a few hours.

“Would the West use military force to regain these territories, perhaps in the face of a nuclear threat from Russia? Or would it try to negotiate?” NATO Secretary General Jens Stoltenberg stands in front of a Leopard tank of the Polish Army while speaking to the media during NATO military exercises on June 18, 2015 in Zagan, Poland.

Noting the potential Russian threat, governments in the region have been increasing defense spending. Sweden’s parliament this year agreed to expand its armed forces budget by $1.2 billion between 2016 and 2020. Norway has increased its defense budget for 2015 by 3.5 percent, to $1.9 billion.

The new government Finland elected in April is also expected to arrest the country’s declining defense budget, which hit $2.9 billion this year. Denmark is the exception, with defense spending locked into a series of annual cuts under a five-year inter-party agreement that doesn’t expire until 2017.

Sweden and Finland are also debating abandoning decades of neutrality and joining NATO. But as CEPA points out, this would take at least 18 months to achieve.

The biggest problem, the report argues, is that the defense strategies of nine states — Denmark, Finland, Iceland, Norway and Sweden, Estonia, Latvia, Lithuania, and Poland — are not coordinated.

Their combined defense spending of $33 billion would be enough to ward off the threat from Russia, if properly managed. But this isn’t the case.

“They are not in the same defense alliance. They do not coordinate fully (or in some cases at all) their threat assessments, military plans, purchasing or exercises,” the report says. “Sweden and Finland are not members of NATO, and they are not going to join in the immediate future.”

Russian President Vladimir Putin, for his part, essentially accused the West of starting the provocation.

“Patrolling by strategic airplanes in remote regions was carried out only by the Soviet Union and the United States during the Cold War,” he told Italy’s Corriere della Sera newspaper in a rare interview. “In the early 1990s, we, the new, modern Russia, stopped these flights, but our American friends continued to fly along our borders. Why? Some years ago, we resumed these flights. And you want to say that we have been aggressive?”

At the Bornholm radar station, Jensen and Hansen are not all that alarmed, yet.

Jensen remembers regularly tracking groups of up to 12 Soviet fighter-bombers in attack formation near the island when he started working at the station in 1975, the height of the Cold War.

“We are not nervous, because we have seen it all before,” he says.