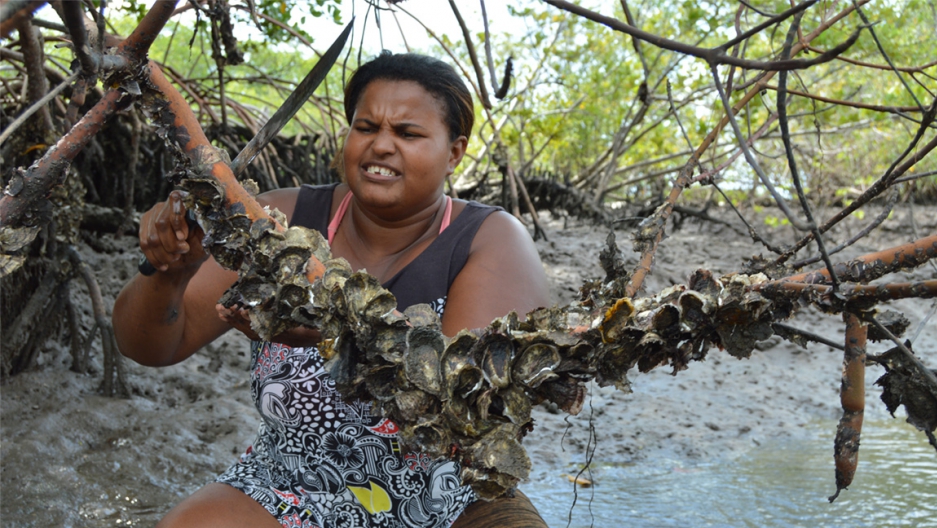 Marisqueiras are women who harvest mollusks, crabs and other shellfish from the waters of Brazil's coastal mangrove swamps. It's an occupation they've pursued for generations. But the steady expansion of a nearby port and industrial complex is threatening their livelihoods and their health. We asked Zoe about these women and the challenges they're facing.

Anne Bailey: What initially drew you to report on the marisqueiras in Brazil?

Zoe Sullivan: I spent roughly half of 2009 in Brazil, where I reported on the conflict between fisher folk in Rio's Guanabara Bay and Petrobras, which was building a liquid natural gas pipeline across the bay. Shortly thereafter, I moved to New Orleans and covered the BP oil spill and its aftermath. Both experiences got me interested in issues facing traditional fishing communities in places with large oil industries; places where women’s issues also seemed particularly underrepresented to me. 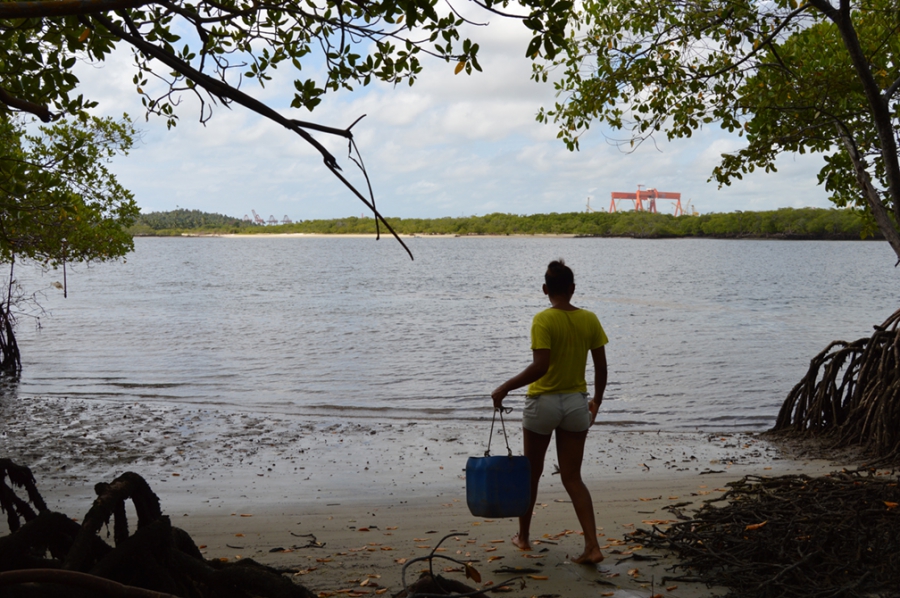 The Atlântico Sul shipyard looms in the distance as Valeria Maria de Alcântara makes her way toward a mangrove to harvest shellfish.

AB: These women harvest mollusks, sand crabs, brown crabs and other shellfish from the tidal mangrove swamps along the coast. What’s their technique?

ZS: To draw crabs out from their hiding places in the mangroves' roots, the marisqueiras whistle and tap on the trees with a knife or a stick. The crabs are attracted to the sounds and come out. Then the women dangle a piece of bait from a hand-made fishing pole, and when the crab grabs it, they swing the crab into their buckets. 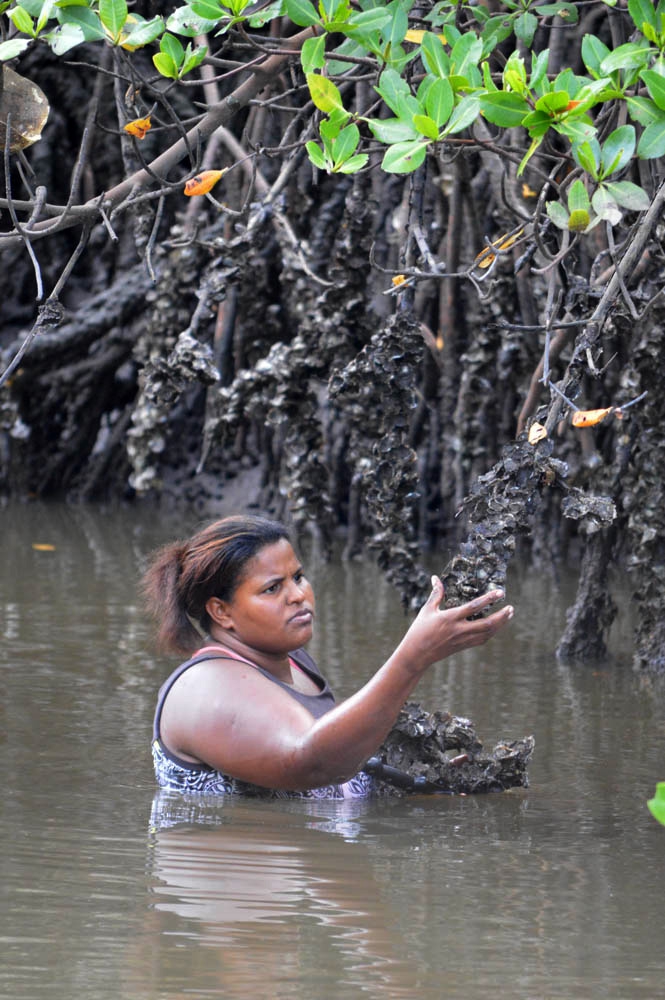 AB: Many marisqueiras in this community say their livelihoods are suffering as a result of the expansion of the nearby Suape Port and Industrial Complex, which houses two shipbuilding firms, a Coca-Cola bottling plant, various chemical companies and other businesses. How far away is the complex and how is it affecting them?

ZS: The complex covers approximately 140 square kilometers — which is divided into the port, industrial areas, and environmental and cultural conservation areas. Consequently, the distances between places where women fish and the complex varies. The women I visited live roughly two kilometers from the ProMar and Atlantico Sul shipyards, which are surrounded by businesses and undeveloped areas. Some communities, such as the Ilha de Tatuoca, have been completely relocated as a result of the complex’s expansion.

The Sociedade Nordestina de Ecologia found that 17 percent of the shell fisherwomen it surveyed suffered from gynecological infections, likely a result of standing in polluted waters. Marisqueiras also complain about skin rashes and lesions caused by toxins in the water. The women I interviewed said the shellfish population has been decimated over the past decade as the port and industrial complex have expanded. 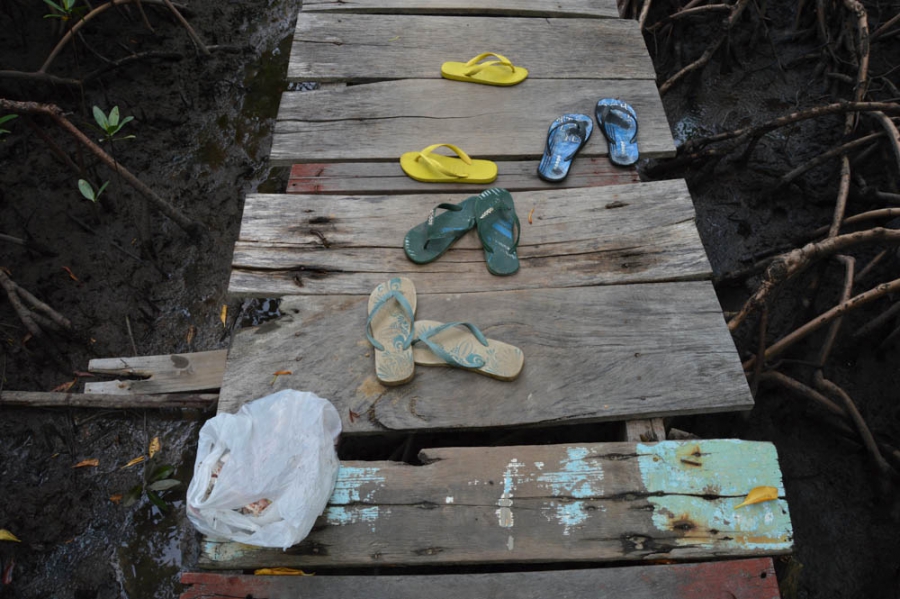 Children leave their flip-flops on the walkway through the mangrove swamp surrounding the fisherwomen's community.

AB: Suape Port officials argue the opposite — that the industrial complex and expansion are actually benefiting nearby communities. How so?

ZS: The construction work linked to the expansion brought thousands of temporary and permanent jobs to the area. A wind turbine company produces blades there, Coca-Cola runs a bottling plant claiming to use primarily local ingredients. The port and industrial complex have offered some displaced residents plots of farmland to continue farming, or homes in a newly-constructed complex. These homes are often closer to schools, which makes it easier for children to get an education. The new homes are also equipped with proper electrical and plumbing systems, which reduces the risk of  electrical shock and disease. 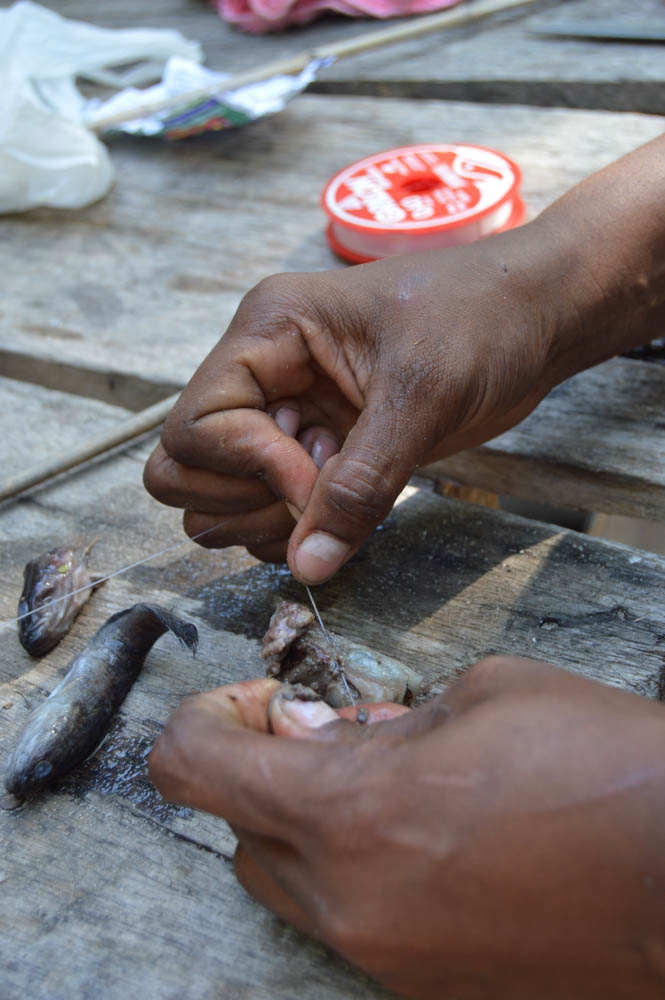 The marisqueiras use small pieces of fish tied to string to snare crabs after coaxing them out from their hiding places in the mangroves.

AB: You mentioned that since the expansion of the Suape Port and Industrial Complex, many marisqueiras no longer feel safe in the communities where they grew up. What’s the connection between the Suape port expansion and these women’s increased fear of sexual violence and harassment?

ZS: Thousands of predominantly male workers came from around Brazil to work on the Suape Port and Industrial Complex expansion, creating a significant gender imbalance in the area. Local residents, including fisherfolk, couldn’t get these jobs, often because of lack of training and education. Now Nivete Azevedo, the director of the Cabo Women's Center, says many women no longer feel safe going to the beach or meeting in the town square because men accost them. The region also has very traditional and conservative gender roles that fail to prepare young women to advocate for themselves in romantic and sexual relationships. For many younger women, the idea of a relationship with a worker from the port complex represents a way out of the hard work and poverty that characterize so many people's lives in the area. This vision, however, often conflicts with the men’s shorter-term goals. 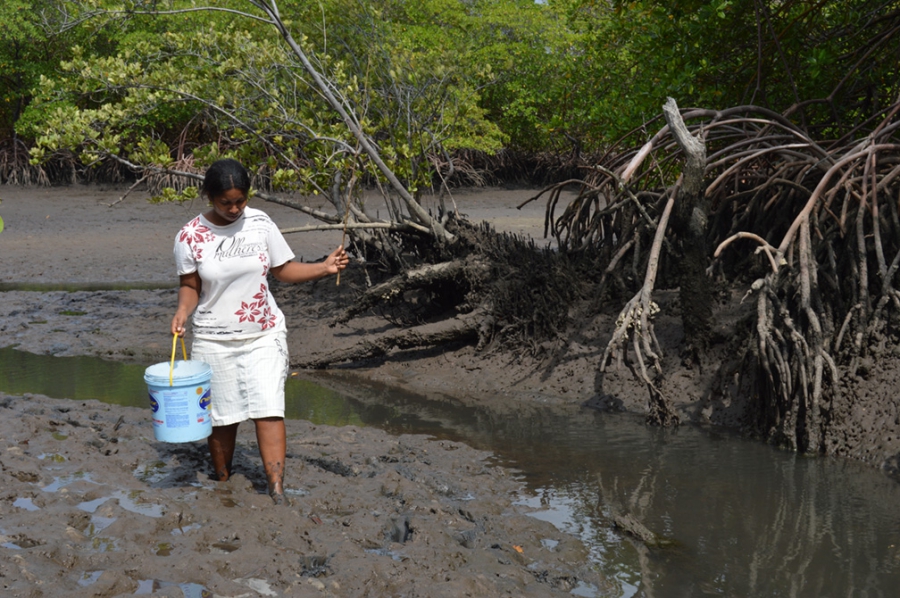 AB: Is this a dying occupation in general in Brazil's coastal communities? What does the future hold for these women if they can no longer work as marisqueiras?

ZS: This is a critical question and one that fisher folk of both genders are organizing around in Brazil. For example, the struggle of fisherfolk in Rio's Guanabara Bay is getting more attention due to the upcoming Olympics and scrutiny of the bay's water quality.

There were approximately 5000 marisqueiras in Pernambuco in recent years. Few want their daughters to follow in their footsteps. They hope that education will offer their girls better opportunities in the formal job market. In the meantime, the options are limited for women who have worked in the swamps for decades. Some seek work in beachside cafés, others in shops or hotels further from their homes. One woman I met runs a bar in her village. But for many families, the loss of this livelihood will make a move to an urban area, and a favela, more likely. Once there, the possibility of fishing or foraging for the family's meals essentially disappears, and informal employment as a street vendor offers one of the few alternatives to the drug trade.

Zoe Sullivan is a radio and digital journalist with a master's degree in participatory research methods from the Institute of Development Studies at the University of Sussex. Her work has been published and broadcast by Deustche Welle, Radio France International, Marketplace, The Guardian, Pacific Standard Magazine, and others.