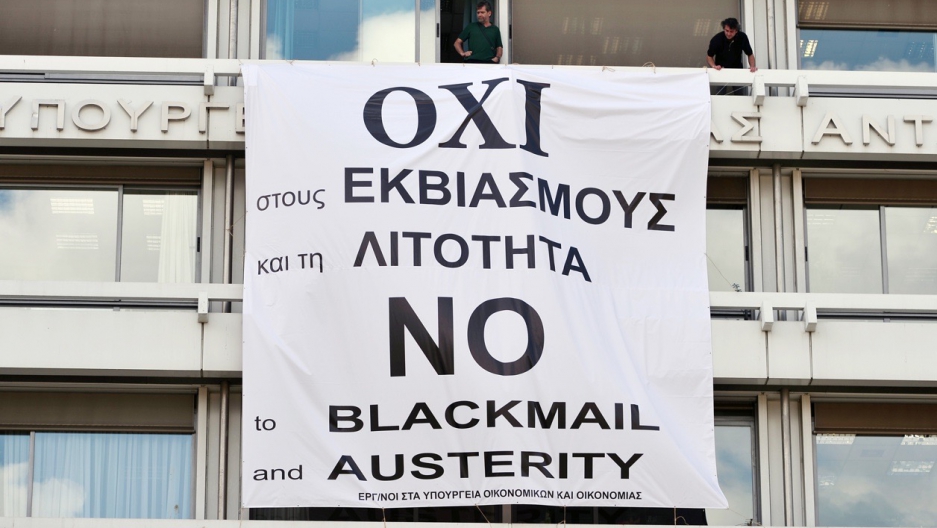 Employees adjust a banner reading 'No to blackmail and austerity' at the Finance Ministry in central Athens on July 1, 2015.
Share

They invented the word in ancient times to describe a primal disorder that preceded creation, but it fits perfectly for a country now in the grip of economic turmoil unprecedented for a modern Western democracy.

In the past few days, Greece has been pushed to the brink of bankruptcy.

It’s become the first developed country to effectively default on payments to the International Monetary Fund.

Banks are closed to stop citizens from running with their cash.

The government may soon have no money to pay teachers’ salaries, hospital power bills or fuel for police cars.

With its finances falling apart, the far-left government of Prime Minister Alexis Tsipras on Wednesday made a last minute appeal to Greece’s creditors.

Tsipras agreed to most — but not all — of the demands made by the IMF and Greece’s 18 partner countries in the euro zone designed to get the country’s finances in order in return for more bailout money.

In a letter leaked on Wednesday, Tsipras pledged to “fully respect the robustness and credibility of the design of the overall program.” That’s a program that closely resembles an austerity plan he’s been urging Greek voters to reject in the snap referendum the government has called for Sunday.

Baffled Greeks were left guessing if the referendum — which had been touted as crucial for deciding the country’s future as a member of the euro-currency zone — will even go ahead.

Or why it should, given that the package of measures they’d be voting on is different from a newer version now apparently accepted by their government — if not yet by anybody else.

Tsipras appears to have caved in after realizing that the creditors had called his bluff.

Exasperated after months of Greek stalling, euro zone governments are seemingly prepared to let Greece go under and crash out of the euro zone if Athens doesn’t agree to their demands. A pensioner holds bank notes next to people waiting outside a national Bank branch as banks only opened for pensioners in Athens on July 1, 2015.

On Tuesday they ignored its appeal for a new $32.3 billion handout; cut off access to $16.6 billion in emergency funding by allowing the current bailout program to elapse; and stood by as Greece missed the deadline for paying back $1.66 billion owed to the IMF, meaning it joined Zimbabwe, Somalia and other financial failures by falling into arrears with the world’s lender of last resort.

Any hopes that Tsipras may have held that his latest climbdown would have grateful creditors rushing to the rescue were quickly dashed.

Germany declared it was pointless to hold more negotiations with the referendum looming.

“We are waiting for the referendum,” Chancellor Angela Merkel told the parliament in Berlin. “It’s not possible to enter into any talks about a new program until after the referendum.”

Her hardline finance minister, Wolfgang Schauble, said Tsipras’ letter had come too late and warned that the euro zone monetary union couldn’t continue with a member that failed to live up to its commitments.

If Tsipras needed further persuading to cancel the referendum, the Council of Europe — the continent’s leading human rights watchdog — chimed in, with its top official telling the Associated Press that the high-speed referendum campaign fell short of international democratic standards.

Yet in a televised address on Wednesday evening, he declared the vote would go forward — and he again urged Greek to vote ‘no’ to the deal.

Polls indicated most Greeks would follow the recommendations of Tsipras’s Syriza party and vote to reject the proposals — although opinion appeared to be shifting as leaders elsewhere in Europe warned a “no” vote could force an exit from the euro zone.

Tsipras has indicated his government would step down if the vote was “yes.”

Finance ministers from the other euro zone countries briefly discussed the latest Greek proposals in yet another emergency meeting Wednesday evening in Brussels. There was no good news for Tsipras there. The other 18 rejected his request for money or negotiations before the referendum.

“There will be no talks in the coming days, either at Eurogroup level or between the Greek authorities and the institutions on proposals or financial arrangements,” said Dutch Finance Minister Jeroen Dijsselboem who chaired the meeting. "We will simply await now the outcome of the referendum on Sunday and take into account the outcome of that referendum. Finally I can just say that I'm very sorry about the situation, given the strong determination of the Greek people to be part of Europe and to remain a part of the euro zone in which we fully support them."

Going into the talks Slovak Finance Minister Peter Kazimir warned clearly that Greeks could be voting to leave the euro — despite Tsipras’ claims to the contrary.

“Greek banks might not reopen with the euro as the currency in case the referendum on Sunday ends with a ‘no,’” Kazimir tweeted.

More from GlobalPost: This chart shows how Greece's last bailout money was spent

Meanwhile, governments across much of Europe were busy insisting that their economies were insulated from the risk of turmoil spreading from Greece.

“Spain and Spaniards can rest easy, among other reasons because over the last few years, thanks to their efforts, they have supported the reforms that were carried out,” Prime Minister Mariano Rajoy told supporters in Madrid.

Markets in Europe seem to be confident the worst can be avoided. Although they have been volatile this week, the panic many feared in response to a Greek default has not materialized.

The Greek crisis intensified over the weekend, when Tsipras walked out of negotiations with fellow European leaders and called for a referendum on a package of proposals including sales tax increases, raising the retirement age and labor market reforms in return for freeing up more of the $243 billion in bailout money that the EU and IMF have earmarked for Greece since the crisis began in 2009.

Tsipras had hoped to substitute cuts demanded by creditors with a series of corporate tax hikes. That was rejected by the creditors, who feared they would discourage investment and stifle already fragile hopes of an economic recovery.

The Greek leaders' decision to walk out of the talks appeared to be a bet that other European nations would back down for fear that a Greek collapse would drag down other economies in Europe — Germany alone stands to lose over $90 billion from a Greek default.

When they didn’t, and with Greece fast running out of options, Tsipras backed down in Wednesday’s letter, agreeing to most of the creditors’ terms.

His concessions, however, may have come too late to prevent this country’s appointment with another concept of ancient Greek origin — the abyss.