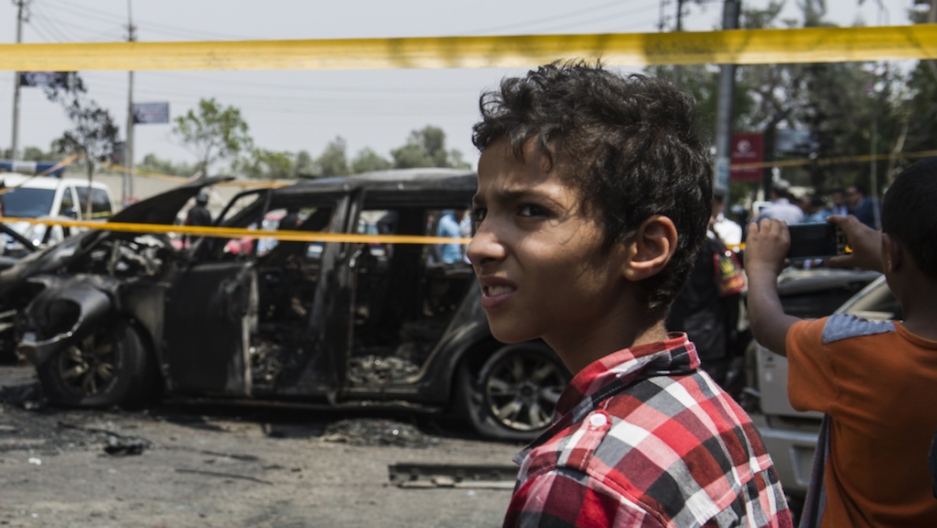 An Egyptian boy looks at the site of a bomb attack that targeted the convoy of Egyptian state prosecutor, Hisham Barakat, who died hours after the powerful explosion hit his convoy, in the capital Cairo on June 29, 2015.
Credit: Khaled Desouki
Share

CAIRO, Egypt — A number of brazen terrorist attacks over the past few days have led some to speculate that Egypt is witnessing a new wave of violence.

Early Wednesday morning, a barrage of coordinated attacks hit the Sinai Peninsula in northern Egypt, killing 70, most of whom were soldiers, security officials said. The group that calls itself the State of Sinai — the Egyptian branch of the Islamic State — claimed responsibility for the attack.

Reports from the Sinai also suggest that the group is holding the town of Sheikh Zuwayed, though analysts familiar with the Sinai say that their control is unlikely to last long. Eyewitnesses report that the army is bombing the city with F-16s.

The attack came just a day after Prosecutor General Hisham Barakat died from wounds sustained in a bomb attack in Cairo.

Sporadic explosions have hit the capital over the past few months, and attacks in the Sinai are not new. But Barakat’s killing appears to have spurred the government to act.

“The arm of justice is chained by the law. We’re not going to wait for this. We’re going to amend the law to allow us to implement justice as soon as possible.” The family of Egyptian state prosecutor, Hisham Barakat, who died hours after a powerful explosion hit his convoy yesterday, attend his funeral at the Field Marshal Hussein Tantawi Mosque in the capital Cairo on June 30, 2015.

There have been hundreds of mass death sentences handed down in recent months, mostly to supporters of ousted Islamist President Mohamed Morsi on charges that vary from espionage to breaking out of jail, to attacking and in some cases killing security forces.

The government says it is fighting a war against Islamists, whom it groups together with terrorist organizations such as the Islamic State in the Sinai, while rights groups have condemned the crackdown and the mass death sentences. Many of the death sentences are on hold, pending often lengthy appeals processes.

Sisi’s comments may indicate that he wishes to expedite those processes or possibly remove them altogether. Without a sitting parliament in place, Sisi has been governing by decree since he was elected a little over a year ago.

While the recent attack in the Sinai was larger than most, this kind of violence has been going on in Egypt for some time.

Three also died Tuesday when a car bomb exploded near a police station in 6th of October City, one of the desert settlements outside the capitol. Meanwhile a policeman was killed in a drive-by shooting outside of a wax museum in Cairo.

All of these events occurred around the two-year anniversary of the June 30 army-supported protests that led to the military coup that swept the elected Muslim Brotherhood government from power — a coup that was supported by a large number of Egyptians.

So why, after months of violence, did the killing of Egypt's top prosecutor spur the government to respond so decisively?

One reason may be that, while before the violence targeted symbols of the government, such as the army and the police, Barakat's assassination marked the first time a top-level official has been killed.

Early reports suggested that Justice Minister Ahmed El-Zend canceled this summer’s judicial leave — a period of three months from July to September during which the courts are not usually in session — in order to close all open cases, but later said the leave would happen as planned.

A Justice Ministry representative said Tuesday evening that the minister was "keen to achieve justice and will submit proposals to the council of ministers in order to proceed faster on delayed cases."

"We will work at full capacity this summer for the soul of the martyr Hisham Barakat,” El-Zend said at Barakat’s funeral.

El-Zend’s remarks reflect a sense that the judiciary, and the government itself, feels under attack.

"I might be killed next after Barakat, but I don’t mind," he said. "We are not afraid of death."