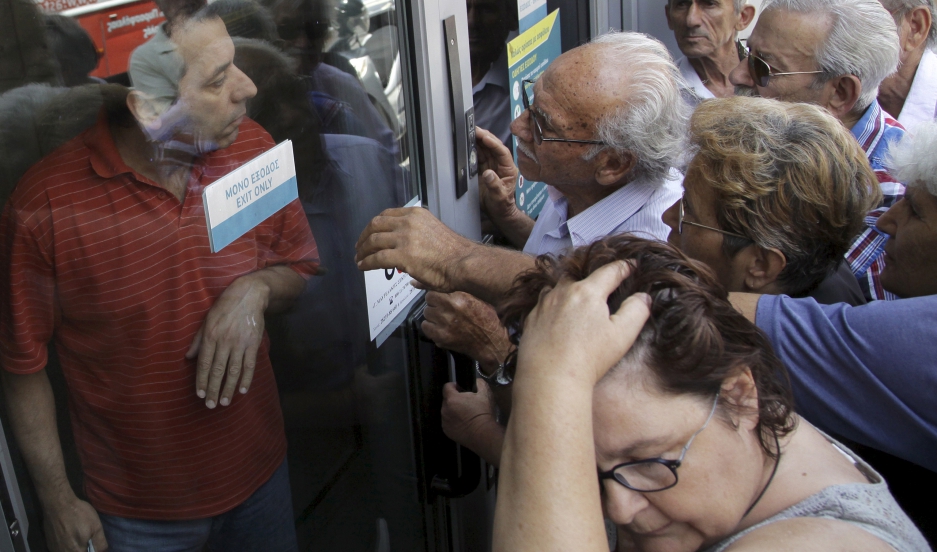 Pensioners waiting outside a closed National Bank branch and hoping to get their pensions, argue with a bank employee (L) in Iraklio on the island of Crete, Greece June 29, 2015. Greeks struggled to adjust to shuttered banks, closed cash machines and a climate of rumours and conspiracy theories as a breakdown in talks between Athens and its creditors plunged the country deep into crisis.

The people of Greece are already feeling the pinch from the latest economic crisis.

“My wife went to the supermarket,” says Greek political correspondent, Christos Michaelides. “She told me that most of the shelves were empty — especially those with pasta, especially those with rice. Also milk, eggs and a lot of canned foods like tomato, tuna, beans, things like that. Which means that people are thinking they will have to manipulate their everyday diet.”

Greece seems to be at an economic breaking point. Bail-out negotiations with the country's Eurozone partners have stalled, and the country is poised to default on its debts to international lenders.

The government in Athens is planning to hold a referendum on July 5 on whether to accept the Eurozone's latest bailout offer or to see if its citizens are willing to quit the European currency altogether.

As a safety measure, banks across Greece are closed, along with some other financial institutions. Greeks can only withdraw the equivalent of 60 Euros — about US $66 — per day from ATMs.

“It has affected the mood of the people already,” says Michaelides. “(There’s) a feeling of anxiety, a lot of fear, and a great amount of anger. Why are we in this position? Why am I standing in line just to get 60 Euros from the ATM? Why do I have to run to the supermarkets to buy things as if it is Christmas Eve?”

“It might not end with the referendum. It could possibly, very possibly, continue for weeks to come.”

Michaelides managed to get a week’s worth of cash from the airport’s 24/7 bank branch before the shutdown. It’ll last him a while.

His son started his first job last month. He’s waiting for his paycheck. He still likes his job, but he’s wondering whether he will even be able to access his pay.

And the older generation doesn’t have plastic cards. They are in an even worse shape. They can’t even use the ATMs and are lining up around the banks.

Michaelides thinks vulnerable people like pensioners could soon be in trouble. “We could be speaking of very serious health problems.”

“My big fear is an exit from the EU, and an exit from the Eurozone. I do believe in the European Union, in the concept. With all its disadvantages and democratic deficit, I strongly believe it is one of the best experiments that have happened worldwide over the last 50 years. I’m afraid that ignorance doesn’t help. Sure, the packages proposed from the lender are very, very difficult. And we will have a rough time in the next few years to bring our act together.”

Tough as things are for Greek citizens, it’s not clear how the crisis will affect the international economy.

Some worry that a Greek exit from the Euro could cause serious damage. Stocks were mostly down across the world on Monday, the first day of trading after the talks stalled. But many economists like Jacob Kierkegaard think the fallout will likely be limited, especially in the US.

“The reality,” says Kierkegaard, “is that US exposure to Greece — either through the banking system, or through exports — is actually quite limited.”

“The real risk,” he adds, “is that the spillover from Greece will negatively affect the broader European economy. ... But even there I’m relatively optimistic because the direct and total exposures to Greece are relatively limited.”