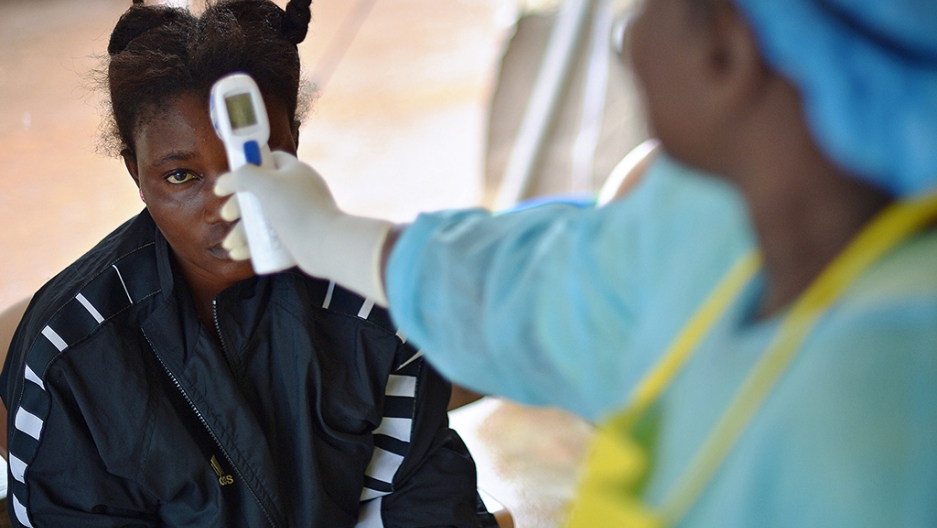 A girl suspected of being infected with the Ebola virus at a government hospital in Kenema, Sierra Leone, Aug. 16, 2014.
Credit: CARL DE SOUZA
Share

In recent months, government officials and international health workers have slowed the spread of Ebola, which the World Health Organization, or WHO, said has infected 13,059 Sierra Leoneans, claimed the lives of 3,928 in the country and killed another 7,300 people throughout West Africa since the current outbreak started in late 2013.

The outbreak has been declared over in Liberia, but it continues in Guinea and Sierra Leone. Eight new cases developed in Sierra Leone and 12 emerged in Guinea in the week ending on June 21, according to the most recent WHO statistics.

Ebola has proved resilient. But people are keeping it alive, too.

Religious practices lead the faithful to touch contaminated corpses. Doctors and public health workers often play a game of catch-up against the virus. Sierra Leonean authorities quarantined three doctors and 28 nurses in Freetown on Thursday, for example, when a mother tested positive for Ebola after giving birth in their hospital unit, the country’s health ministry said.

Now sex has also emerged as a factor in Ebola’s persistence.

Sierra Leone health officials check passengers crossing the border with Liberia on March 28, 2015. The authorities in Sierra Leone mandated a three-day lockdown to curb the spread of Ebola, forcing the entire population to stay at home.

Sierra Leonean and international health officials have ordered Ebola survivors — about 9,130 people in the country — to abstain from sex for 90 days after they recover because the virus can linger in semen for that length of time after men have seemingly overcome the illness. It’s not clear whether or not women can transfer the virus to men, according to the World Health Organization.

But people are having a hard time following the directive.

Sierra Leone has banned large gatherings out of fear of spreading the virus. Restaurants, theaters and other social venues have been shuttered. There’s not much to do outside the privacy of one’s home. And many Sierra Leoneans eschew condoms as awkward.

“I belong to the village health committee that sensitizes people to the importance of abstinence and observing the no touching rule under the Ebola crisis,” said Patricia Bangura, a college student in Freetown who said her boyfriend often sweet talks her into making love. “I want to practice what I preach. But my boyfriend is usually not happy about it. The issue of condoms is out of it because I don’t like them.”

Following the health experts’ advice carries its own pitfalls.

“There is no more trust between me and my girlfriend,” said Augustine Mansaray, 25, a resident of Kamabai in northern Sierra Leone. “We always quarrel because she is even afraid to come close to me, not to talk of making love. If it continues this way, I might find another alternative because I am human and have feelings too.”

For women, however, the consequences for withholding sex are often downright dangerous.

“I have been battered twice by my boyfriend whilst resisting him,” said Hassanatu Koroma, 20, who lives near Port Loko, where a few new cases a week are common. “I am just following the abstinence-no contact rules. I have lost relatives to Ebola. I am very scared of the disease.”

Chief Pa Alimamy Fornah, a local official in Masuba in northern Sierra Leone, said he has levied fines on two men who infected their wives in his community. He’s also reprimanded three men for violating the 90-day rule despite their wives’ misgivings. He’s never encountered women violating the ban.

Koya Chief Bai Kompa Bomboli has threatened to publicly flog men who force themselves on their wives. So far, no cases of flogging have occurred, however. “When a heavy punishment is levied, people will take this issue very seriously,” he said.

Osman Turay, who wants to start a family but must abstain from sex because he is recovering from the Ebola virus, at a community meeting in Sierra Leone. To the right is his wife, Kadiatu.

“Most of them died because they are shy to report the way they contact the disease,” she said. “This is serious. We need to be more firm in dealing with this.”

Sexual pressure or violence is only part of the story. Many Sierra Leoneans feel as if the Ebola crisis has already forced them to put their lives on hold. Abstinence seems like an insult on top of the injury they’ve already sustained.

A 28-year-old mechanic in Masuba, Osman Turay, said he married his wife with the expectation of having children. He wants to start a family. There’s only one way to do that. So he’s frustrated.

“Husbands will continue to be at loggerheads with their wives,” he said. “I think there has to be another way to address this issue.”