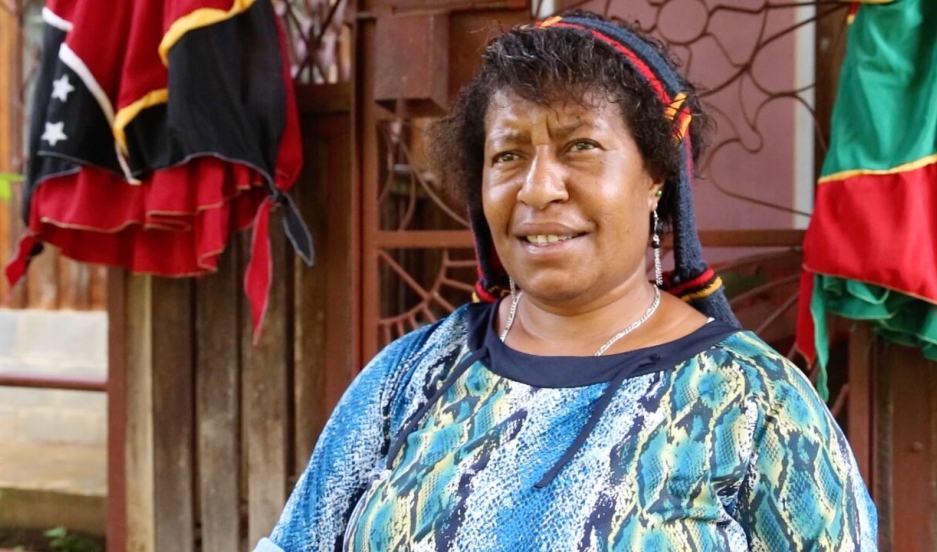 Dorothy Ketau shows how married women wear a bilum. This tradition is fading, as more women start to wear the bag on their shoulder.

When Florence Jaukae, a struggling single mom with five kids, saw garments made of her cloth on a fashion runway in New York, she broke down in tears. It was the culmination of over a decade of doing the unthinkable on a Pacific island north of Australia. She had turned an age-old tradition into a fashion business.

Deep in the hills of Papua New Guinea lies isolated, rural Goroka province. On a sun-drenched day, you often spot women sitting under a tree for shade or perched against a grass hut, twisting plant fibers into yarn, weaving the yarn into a textile and making a carrying bag called a bilum.

A bilum weaving-style dress designed and made by Florence Jaukae is shown on the runway at the LDNY Festival in New York’s UN building.

From the time that a young Papua New Guinean girl is old enough to remember, bilum bags are part of her life. She grows up seeing her foremothers weave them, wear them with a strap across their foreheads and even be married off with them. Traditionally made of plant fibers and other natural materials, such as feathers and fur, bilum bags show a girl’s social standing, where she came from and her marital state.

Bilum as a bride price

When marriages are arranged in Papua New Guinea, the husband and his family send a bilum bag as part of the “bride price.” After the exchange is made and the marriage is finalized, the girl slings the strap of the bag across her forehead and uses the bag to carry things, like food, on her back. The bilum notifies everyone that she is married.

Isolated Goroka has recently felt the impact of westernization. In the last five to 10 years, the Internet, cell phones and television have slowly changed the culture. Jaukae and other women say men are now more likely to abandon their wives and children for a modern life, often with a younger woman.

After this happened to Jaukae, she felt lost trying to support her five children. She found comfort in going back to tradition and weaving bilum cloth. But instead of making it into a bag, with all its marriage symbolism, she sewed it into a dress and wore it in town.

The 30-year-old single mother remembers the shocked reaction. “Everybody would say ‘Look at that! Is she all right? A bilum is something we carry our food in. Who is she to wear that?’” she says. “So I was really breaking through customary beliefs.”

News travels fast in small towns like Goroka. As people spread word of Jaukae's dress and other bilum creations, she became known as bilum meri, the bilum woman. Soon, she started to receive orders.

By showing the women of Goroka that bilum need not be limited by the confines of marriage, she unintentionally taught them that they need not be either.

A Papua New Guinean girl wears a wool bilum bag over her shoulder.

Now, more and more women are starting to wear bilum bags, but over their shoulders, challenging the symbolism of bilum as a marriage bond.

In the past, “bilum” almost exclusively referred to the bag worn on a woman’s head. Largely due to Jaukae's unwitting act of rebellion, bilum has now come to mean the cloth used to make the bags.

Jaukae sells bilum dresses, hats and scarves in a variety of colors, patterns and materials, depending on the tastes and finances of the buyer. Many single women are customers, and some clients are abroad. How she got to this point explains that day in New York at a fashion show in 2014 when her cloth made it down the runway.

At first, she says, “it was really hard work trying to break down people to understand that bilum can be something different.” She needed a loan to build her business and to bring in other women to help her weave. “So I invited Pacific Islands Trade and Investment [a government business development agency] and said, ‘Come along. I am hosting a bilum festival.’”

She planned her festival just before a popular market event called the Goroka Show, so tourists would be in town with time on their hands. Jaukae saw it as an opportunity for single mothers, like herself, to sell their work.

Dorothy Ketau made this wool bilum bag with text on it. People ask Ketau to weave their names or where they are from on items she makes for them.

The Bilum Festival was such a success with tourists and locals that it is now celebrated annually, she says. “When the tourists and guests come into Goroka town for the show, at least they come to my festival and then they buy bilums from my mothers [the weavers].”

While Jaukae focuses on a growing foreign clientele, other weavers have focused on modernizing bilum making for the local market. Dorothy Ketau heard Jaukae speak at a women’s empowerment event and, as a mother without a partner, wanted more control over her life, too.

To create a lower-priced bilum to sell locally, Ketau decided to use a machine, instead of her hands, to twist the yarn. That cut spinning time in half. She also works with less expensive, synthetically dyed wool — a material Jaukae wouldn’t dare use.

Ketau now also has a group of single mothers working for her. Each weaver can churn out a bilum bag in a week or so. Ketau sells a no-frills version of the traditional one used for bride price at just 100 Kina. One Kina in Papua New Guinea buys a pineapple at the market or a round trip bus ride into town. It's about $37.

Ketau spends about 10 Kina on supplies per item. “So if [the clients] are paying me 100 Kina for a bilum, I pay [the weavers] 40 kina,” explains the new business woman. She says she earns more than 500 Kina a month.

She is finding life as a single mother easier than ever before. “When I was working, I was still weaving, too,” she says, “but the type of money I make right now is far better than ... being employed.”

Dorothy Ketau made this patriotic wool bilum bag (top) and a merri blouse (bottom). The bag was done in the style and colors of the flag and the blouse is made to reflect that. The meri blouse is a shirt women wear in Goroka, PNG to maintain modesty. They are typically worn together with matching colors, says Ketau.

Ketau says she sees an uptick in sales prior to the wedding season. “When it comes to an occasion of bride price,” she says, “we make a lot of money. It is really valued in our society, in our community especially. Any bride price that is done can’t go without bilums.”

Ketau is making a living off a traditional way of life that has eluded her. Like Juakae, Ketau has seen an impact on the lives of the women who work tirelessly to make mass-produced bilums for her.

“I would like to take it to the next level where I can come back to help the weavers, ‘cause I have seen how they have struggled, too. All of the weavers tend to be ... single mothers, defectors [divorced women,] separated, all this. I think I can use this bilum to bring some help back to these mothers.”

Recently, Ketau was asked to make 5000 bilums to be given as gifts at the South Pacific Games (Papua New Guinea’s local version of the Olympics.) She has also been chosen to showcase her bilums at next year’s Bilum Festival and has registered as a bilum maker with the National Cultural Commission in its effort to preserve the culture and art of bilum making.

Florence shows off a wool bilum bag she made, with a pom pom at the top.

Jaukae, though, has grander ambitions for bilum. She wants to bring it, and her business, to the world.

In September, 2014, she participated in the LDNY (London-New York) Festival. Held at the United Nations’ headquarters in New York, the festival featured a fashion show and luncheon, aimed at empowering and inspiring up and coming female designers.

The experience opened her eyes to how far she had come, and how much further she still had to go. “Everybody knew where they were going and who were the buyers there,” she recalls. “There were women with money. They had factories and they had places where women work.”

Fashion students from Parson’s School of Design and the London College of Fashion were charged with selecting one of the international designers and creating an item of clothing from the designer’s material for the fashion show.

Once again, Florence found herself in the position of having to justify bilum as something more than a quaint tradition. Students would come up to her perplexed by the new fabric, inquisitively stammering, “How am I going to…?” She would then explain how it could be used in designs and they would politely retort, “Oh ... okay,” and move on to the next designer.

She feared that “nobody would want to work with bilum, because everybody was confused.” But one lone student from the London College of Fashion came up to her and said she would like to make a hoodie of bilum.

“When my bilum came down [the runway,] I was like ‘That’s my bilum.’ I was completely lost. I just sat there and tears were coming down.”

It was the culmination of one dream and the start of a new one. “I want a huge market. I want to export more, like home wear [casual wear] fashion. Fashion from the ethnic side,” she says.

From single mother — and now grandmother — trying to make money for her kids through a traditional craft, Jaukae now sells her custom work to clientele in Australia and is getting comfortable with the label of international designer.

“[Bilum] has changed my life greatly.”