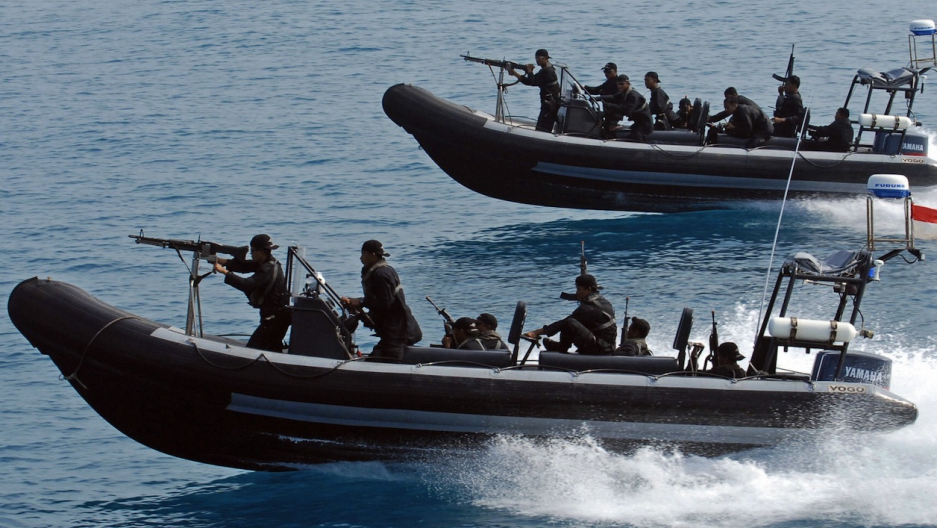 Forget Somalia. Southeast Asia’s seas — particularly around Indonesia — are now among the most preyed-upon waters on the planet. Pirates with skill and cunning can make millions by seizing just one boat and siphoning off its fuel. And they appear to be getting bolder.

The latest attack kicked off when eight pirates with pistols and machetes climbed aboard a Malaysian oil tanker on June 11.

These were no amateur pirates. They managed to subdue the 22-man crew with only one serious injury: a cook shot in the thigh. They successfully dismantled the ship’s communications gear. To disguise the boat, they even used black paint to alter its name. Called the “Orkim Harmony,” the boat was rechristened “Kim Harmon” by the pirates.

Welcome back home #OrkimHarmony! (ETA 2 am, 20 June) Thank you Allah & @tldm_rasmi. Our prayers have been answered :) pic.twitter.com/x2iJshuqAn

Their prize: $5.6 million in unleaded gas stored on the tanker. It appears that they’d planned to siphon it off into their own separate pirate ship. But the pirates were too slow.

An international search commenced once the tanker’s communications went dark. The pirates got spooked and fled using the tanker’s tiny rescue boat. They washed up on a Vietnamese island with loads of stolen cash and a bad alibi. The men, all Indonesians, claimed they’d survived a shipwreck. Suspicious police weren’t buying it. They were jailed and have since confessed.

The pirates very well could have succeeded in stealing the fuel. Just a week earlier, a similar tanker was hijacked in the same region. Roughly 6,000 barrels of diesel were siphoned into a getaway boat. The pirates got away with the diesel and left the crew unscathed.

But they are growing more common. Pirates hijack small tankers in Southeast Asia once every two weeks and, in Indonesian waters, piracy incidents are up 700 percent in just five years. Meanwhile, Somali pirates are vanishing from the scene.

Indonesia is a natural pirate's playground. One-third of the world's shipping trade flows through these waters, passing impoverished coastal dwellers that a weak police force struggles to rein in. The steadily increasing number of cargo ships and tankers presents an irresistible target for seafaring crime syndicates.

The silver lining to piracy in Southeast Asia is that criminals have so far shown little interest in kidnappings for ransom, a mainstay of Somali piracy. A review of Southeast Asian piracy incidents in recent years reveals a theme: the pirates are seldom brutal and like to get in and get out as quickly as possible.