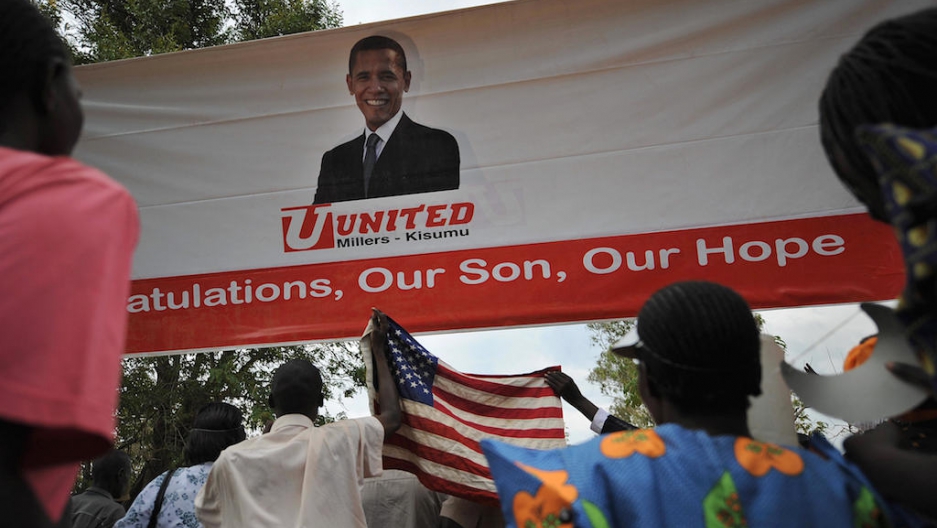 Kenyans raise a US flag in front of a banner with the image of the about-to-be-inaugurated US President Barack Obama on January 20, 2009 in Kogelo, where his father was born.
Credit: Tony Karumba
Share

NAIROBI, Kenya — As Nairobi gussies up for Barack Obama, planting flowers and mucking out gutters to beautify its traffic-clogged main roads, some Kenyans are anticipating far bigger changes when the American president visits, at long last.

“His coming will help the economy,” said Benjamin Sadiki, 27, who sells fish and chicken at a Nairobi market. “It will help tourism. It will help security.”

“We believe that when he comes, many things will change, ” Sadiki said.

Obama’s first presidential visit to his father’s homeland, and likely his final trip to Africa while in office, comes after a devastating time for Kenya. In April, the militant group Al Shabaab attacked Garissa University College near the Somali border, killing at least 147 people, most of them students. At least 67 people were killed in Al Shabaab's siege of the Westgate shopping mall in Nairobi in 2013.

More from GlobalPost: An eyewitness recalls the horror of Al Shabaab's attack on Kenya's Garissa university

Tourism — an important part of Kenya’s economy — has plummeted, with foreign tourists canceling their safaris and trips to coastal beaches. Visitor numbers dropped by 25 percent in the first five months of this year.

But news that Obama is coming at long last has lifted Kenyans, who are hoping his July visit will reassure tourists and lead to improved security. Much like when Obama took office in 2008 to outsized expectations, in Kenya expectations are sky-high despite few details known about the president’s visit.

The local government says it will spend nearly $2 million on beautifying Nairobi, including cleaning up trash and planting flowers along main thoroughfares where Obama's convoy is likely to pass. Authorities recently shuttered the private Barack Obama University on the outskirts of Nairobi, which was said to be operating illegally, removing billboards and signs at the gates.

The village where Obama’s father was born, and where Obama relatives still live — including his step-grandmother Sarah Obama — is also getting ready in expectation that the president will visit, even though that seems unlikely.

Sadiki, who is from the same village, Kogelo, said when he returned home recently the residents were already sprucing up roads and buildings in preparation.

More from GlobalPost: Compared to his predecessors, Obama has done little for Africa

“According to our culture and his tribe — his roots — it is not good if he comes here to Kenya and does not visit his village,” said Sadiki, wearing a baseball cap that says DOPE in gold letters.

“He’s going to visit his village, his people.”

Obama’s schedule has yet to be announced and it is unclear whether he will make the trip to Kogelo, in western Kenya.

The main focus is the Global Entrepreneurship Summit in Nairobi, where Obama will speak. He is also due to meet with the Kenyan president, Uhuru Kenyatta.

Choosing Kenya to co-host the entrepreneurship forum, launched by Obama in 2009, “underscores the fact that Africa, and Kenya in particular, has become a center for innovation and entrepreneurship,” a US government statement said.

“Just as President Kennedy’s historic visit to Ireland in 1963 celebrated the connections between Irish-Americans and their forefathers, President Obama’s trip will honor the strong historical ties between the United States and Kenya,” it said.

A Kenyan hawker sells posters of US President-elect Barack Obama to motorists on January 19, 2009 in Nairobi on the eve of his inauguration.

However, Obama has faced criticism for his Kenya trip, and in particular his planned meeting with his counterpart Kenyatta.

The charges were dropped over a lack of evidence, with prosecutors blaming massive interference with witnesses, including bribery and intimidation.

More from GlobalPost: How Kenya took on the International Criminal Court

Robert Rotberg, founding director of Harvard Kennedy School’s interstate conflict program, argues in an opinion article that Obama should postpone his visit until after he leaves the White House.

“Conferring the honor of President Obama’s office on such thoroughly questionable leaders would do little to strengthen our own role as a promoter of good governance and the rule of law,” he writes.

After Kenya, Obama will travel to neighboring Ethiopia, headquarters of the African Union, where the repressive ruling party has won re-election with a remarkable 100 percent of the vote.

More from GlobalPost: Africa no longer awed by US leader's star power

When Obama became president, instead of visiting Kenya so soon after its post-election violence, he headed to Ghana for his first Africa trip, praising its elections and hailing the country as a “model for democracy.”

Now he is visiting Kenya at last, after seven years in office.