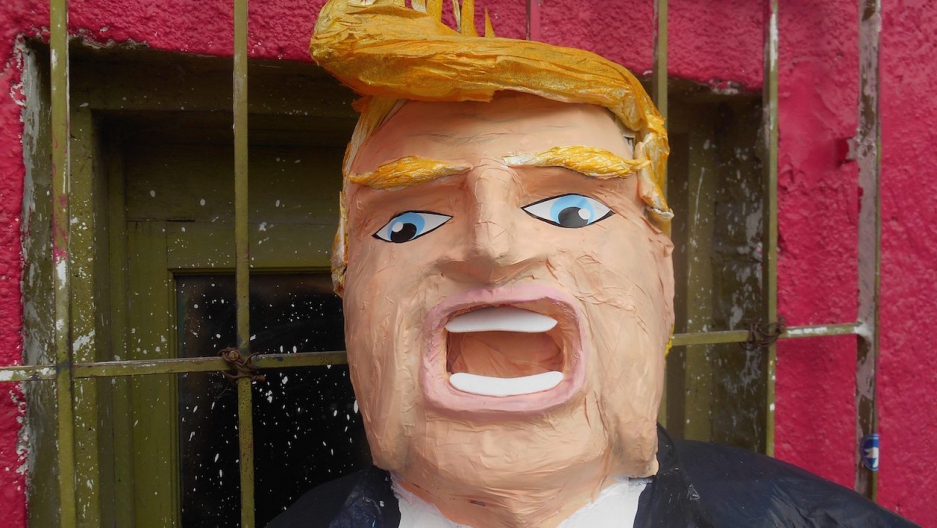 MEXICO CITY — When Donald Trump said last week that Mexican migrants are criminals and “rapists,” many here angrily cursed through their keyboards.

But up in the border city of Reynosa, artisan Dalton Avalos Ramirez made an object people could hit even harder — a piñata in the form of the billionaire wannabe president.

Here's a video by NBC News shot at the Ramirez family's piñata workshop.

In case you've forgotten: Piñatas are made of papier-mache or clay, are filled with candy, and hung at parties where blindfolded people whack them with sticks until they break.

Something told Avalos that Donald Trump would make a good candidate for said activity.

“The comments by Trump were very offensive. On the border you see the struggles that immigrants go through and the real problems they suffer from racism,” Avalos, 28, told GlobalPost. “So this is a piñata that people might want to hit very hard.”

Photos of the Trump piñata are now all over the web.

It is not the first one Avalos has made that’s shot to cyber stardom.

Other recent works he has crafted at his family business, Piñateria Ramirez, include Kim Kardashian, soccer star Cristiano Ronaldo and even transgender former Olympian Caitlyn Jenner. A piñata of Caitlyn Jenner.

In most cases, Avalos chooses celebrities to turn into party games simply because they’re fun, rather than figures of hate.

“Most of the time when I am making a piñata, I am not thinking about destroying it. I am thinking about making something that will grab people’s attention,” he says.

Another piñata he made that people wanted to hurt was of Dutch soccer striker Arjen Robben. In the 2014 World Cup, Robben helped eliminate Mexico by winning a penalty kick. The Mexican manager, and most fans here, claimed that Robben dived.

The piñatas sell in the family shop for about $35 a piece. Since they have gained internet fame, many people also come just to see and photograph them, Avalos says.

The eldest of five brothers who all work in the business, Avalos has been making piñatas since he was a toddler.

He explains how the Mexican tradition dates back centuries, originating with piñatas of balls and spikes that represented the Seven Deadly Sins. A piñata of Elsa from Disney's "Frozen."

Piñatas are now found mostly at children's parties, where they often come in the form of kids' movie characters, like “Minions” or Elsa from “Frozen.”

However, Avalos says he likes to make piñatas for the adult market (the shop's Facebook page displays some raunchy ones that would not exactly suit your 6-year-old's birthday bash).

Other artisans around Mexico have also used the tradition for political satire. In the early 2000s, people made piñatas of both George W. Bush and Osama Bin Laden.

“It is a way of laughing at the world,” Avalos says.