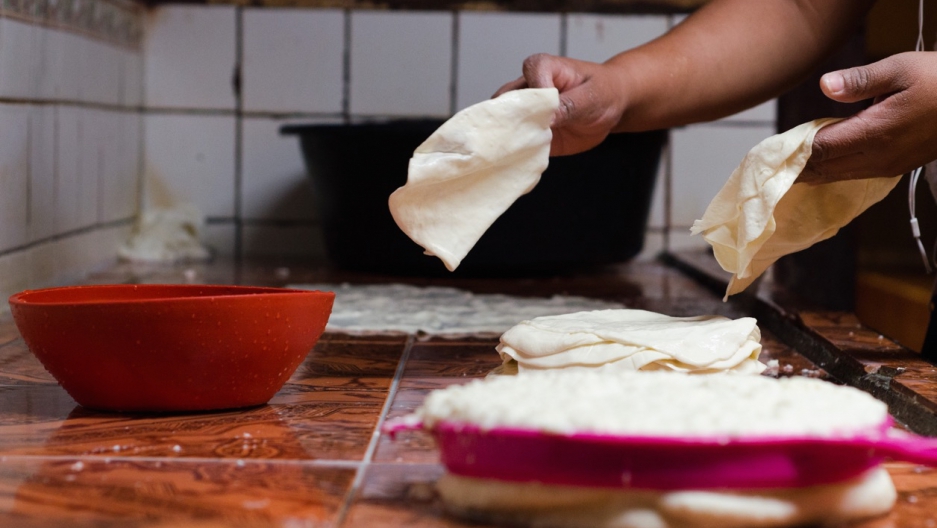 A quesillos maker in the Nicaraguan town of Nagarote prepares cheese to be placed inside a fresh tortilla.
Credit: Tom Sullivan
Share

NAGAROTE, Nicaragua — “How do you eat this?” a confused American tourist asks as he's handed a mass of cream and cheese wrapped in a tortilla inside a plastic bag.

Everyone who first encounters the “quesillo,” a gooey mess that is one of Nicaragua’s most unusual foods, asks the same question.

“The whole world eats quesillos — the young, the old, the rich, the poor, everyone,” says Olivia Delgado, a beloved quesillo vendor whose roadside stand attracts a steady stream of customers from dawn to dusk.

The twin towns of Nagarote and La Paz Centro in northwestern Nicaragua are ground zero for quesillo connoisseurs. The dish is said to have been invented here over a century ago. By common agreement, the best ones are still found here.

Master quesillo makers like Delgado deftly slap the cheese into a hot corn tortilla, then add pickled onions, cream, and salt. The result is a thick, soft, delightfully sloppy delicacy that has a special hold on Nicaraguans. Two women at Quesillos Acacia in Nagarote prepare tortillas and throw them onto a pile, where another person will take over the job of cooking them.

In Nicaragua quesillo — pronounced keh-SEE-yo — is more than an easy, everyday meal. It is a cultural icon. Eating this dish is part of what makes one Nicaraguan. The process of making quesillos, which starts with churning cheese and finishes with toasting tortillas, also provides steady work for hundreds of women in Nagarote and La Paz Centro.

The quesillo is so central to the identities of these two towns that both have built statues of quesillo vendors, likely the only two in the world. Each depicts a strong, beautiful woman proudly balancing a basketful of quesillos on her head. A statue to honor the "quesilleras" who sell quesillos, in Nagarote's central plaza. La Paz Centro has a similar one.

Quesillos are on the menu at countless restaurants and roadside stands all over Nicaragua. Most cost the equivalent of about 50 cents. Nicaraguans of all ages and classes eat them — morning, noon, or night.

People here say that the quesillo dates back to the early 1900s, when women sold an early version of it made with only cheese and a tortilla, wrapped in a banana leaf rather than a plastic bag. Many customers in those days were passengers on the newly constructed railroad that ran through Nagarote and La Paz Centro.

In the 1960s, according to local lore, a woman named Doña Dalila began adding cream and pickled onions to the cheese, creating the modern quesillo.

The railroad is long gone, but the highway that has replaced it is lined with quesillo stands. One reason Delgado’s stand, Quesillos Güiligüiste, is among the most popular is that it is the very place where Doña Dalila, the stand’s original owner, reputedly made some of her first quesillos more than half a century ago.

Nicaraguans are quick to name their favorite quesillo stand. Each can argue persuasively why one quesillo is better than the others. Some prefer those at Quesillos Bone in La Paz Centro, where the tortillas are scalding hot. Others favor the ones at Quesillos Acacia in Nagarote, which are distinctly less salty. Still others insist that the fresher cream and less watery onions used at Quesillos Güiligüiste makes them best.

Today, La Paz Centro and Nagarote remain the undisputed center of the quesillo cult. There is friendly competition between the two towns, including a never-ending debate over which is the dish’s true birthplace. “In Nagarote, there isn’t anyone who doesn’t care about quesillo,” reports Huberth Jose Baca, who sells quesillos in Nagarote’s central plaza. The same could be said for La Paz Centro.

Since this region is known for poets, it’s inevitable that verses have been written to honor the treat. “I am the typical dish that everyone seeks/Aromatic and with exquisite shine,” says one written by Jose Angel Palacios, director of Nagarote’s cultural center.

Far from fading with time, the quesillo is growing steadily more popular. New stands continue to open across the country. According to local gossip, several entrepreneurs are trying to mechanize the process of preparing quesillos so they can be exported in bulk.

The quesillo has already spread beyond Nicaragua’s borders. In 2008 one of Delgado’s sons opened a restaurant in Miami that specializes in quesillos. It bears the same name as his mother’s stand in La Paz Centro: Quesillos Güiligüiste.

None of this seemed clear to the puzzled American who was struggling with his first quesillo on a recent morning at the original Quesillos Güiligüiste. After suspiciously examining it from all angles, he took his first bite. Cream spilled over the sides of the open bag and onto his hands. This happens to every novice.

Not all enjoy the experience. Every Nicaraguan, however, seems to. “When I die a long time from now,” said a vendor in Nagarote, “they’ll still be talking about the quesillo.” This is Marina Do Nascimento, a Brown University student, eating her first-ever quesillo, in Nagarote, Nicaragua.