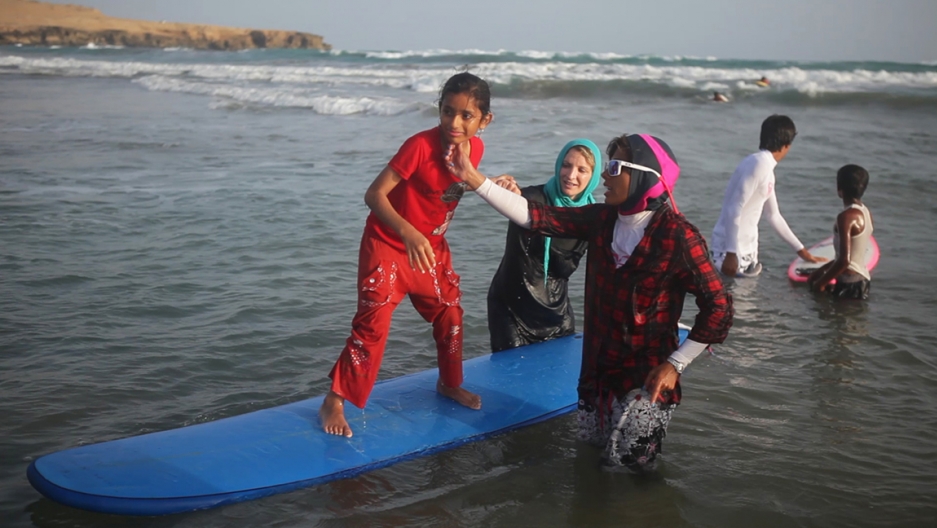 French filmmaker and avid surfer Marion Poizeau joined forces with two Iranian women athletes in 2013 to help introduce surfing to Iran. We asked her to tell us more about her experience teaching the sport, and shooting her documentary "Into the Sea," in one of the most remote corners of Iran.

Anne Bailey: When most of us think of Iran, surfing is the last thing that comes to mind. How did you come up with the idea to introduce surfing in Iran and why?

Marion Poizeau: The idea came from a friend of mine who knew that nobody was surfing in Iran but who also knew that there was good surf in the southeast of the country. In 2010, he connected me with Easkey Britton, a professional female surfer from Ireland, and the three of us planned to meet up in Iran. Unfortunately, my friend missed his flight, so Easkey and I met up in Tehran instead and decided to keep going with the adventure without him. That's how the story became 100 percent feminine. We had a few apprehensions initially, but the local people were very happy to see surfing for the first time. I did a short film about this first trip that got a lot of traffic on the Internet, and some Iranians asked us if we planned to come back. So in 2013, we decided to go back and take some surfboards with us. 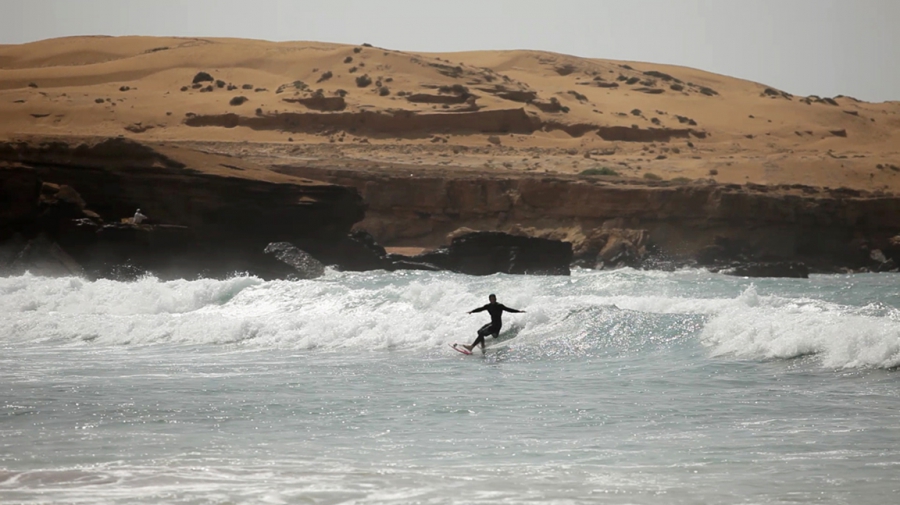 Surfing in Baluchistan with the desert in the background

AB: You started your surf school in the southeastern corner of Iran near the border with Pakistan in an area called Baluchistan. Why did you choose that location and what challenges did you face there?

MP: Baluchistan is the only place for waves in Iran. So we didn't really choose the location; it chose us. It's considered to be one of the most dangerous regions in the world because it is a major area for opium trafficking. That's probably why people weren't surfing there yet. People don't really know about its stunning beaches and scenery, which is a shame because it's truly beautiful. We were surprised by how welcoming the Baluch people were toward us. It's a traditional area, and we had to respect the Islamic rules about going in the water. 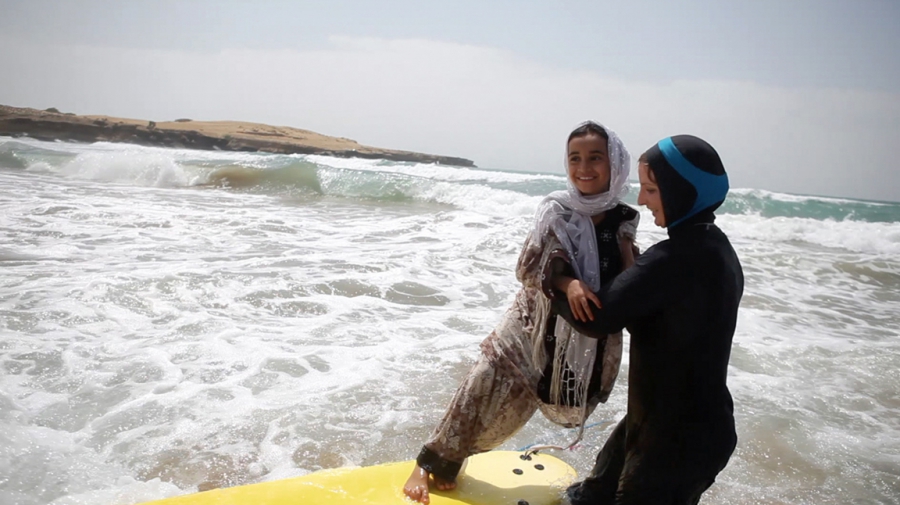 A Baluchi girl practices standing on her board.

AB: In Iran, women are expected to wear the hijab in public, which seems challenging in the context of surfing. How did you, and the girls you taught, manage?

MP: In the context of surfing, women have to be covered, and only women can teach other women. We found some clothes to cover ourselves in the water. It's not practical, but it's doable. Our clothes aren't very well adapted for surfing; we just used what we could. For now, we're wearing lycra leggings with board shorts and a lycra shirt on top which makes it very heavy. There is no traditional wetsuit. The girls and women usually just wear their clothes in the water or, if we're going to a private beach for women only, then they wear bikinis. Mostly we have been surfing in public spaces, so we have to be covered. I'm currently working on a light and comfortable swimsuit collection — one that respects Islamic rules for women — with a French-Iranian designer named “Scheyda.” The swimsuits aren't just for Muslim women, but are practical, comfortable, secure and feminine. This collection would give women greater access to surfing in better conditions. 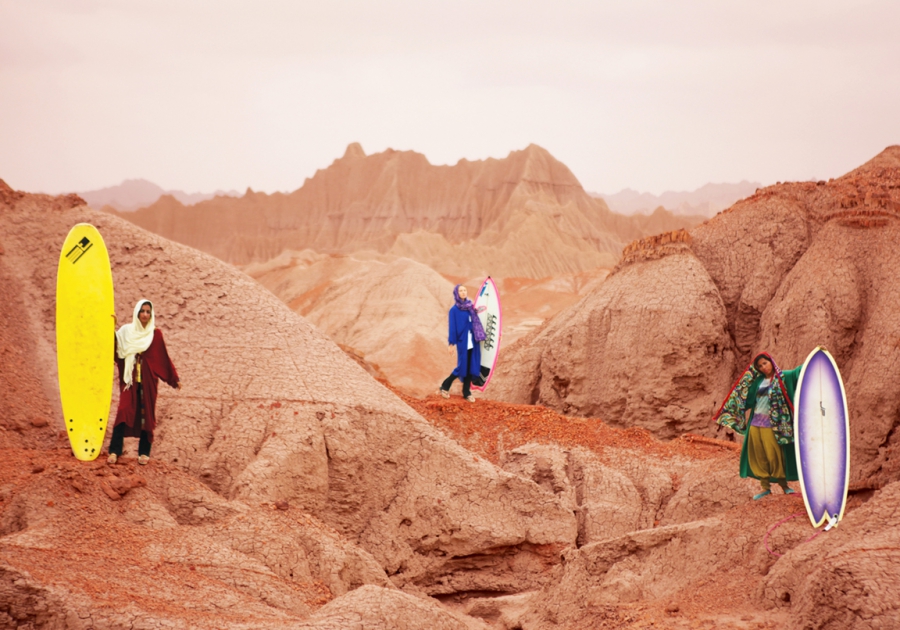 Posing for the "Into the Sea" poster. From left to right, Shalha Yasini, Easkey Britton, and Mona Seraji.

AB: Three years ago, our host Marco Werman interviewed Easkey Britton, an Irish surfer, about being the first woman to catch a wave in Iran. How did you team up with Easkey and the two other Iranian women at the heart of your film?

MP: I filmed Easkey during our first trip in 2010, and we had a strong connection from the start. When we decided to go back in 2013, I wanted to join my love for film and sports and decided to do a feature film about surfing in Iran. When I was preparing for the second film, I thought that if we could establish a group of pro-surfing women, we could get more women to join. So through some research on Facebook, I found two Iranian women who were quite involved in their disciplines: Mona Seraji, a snowboard teacher in Tehran, and Shalha Yasini, a swimmer in Zahedan. I wrote them and asked if they wanted to learn surfing, and they both accepted without hesitation. They had both seen my first short surfing film on the Internet and loved it. 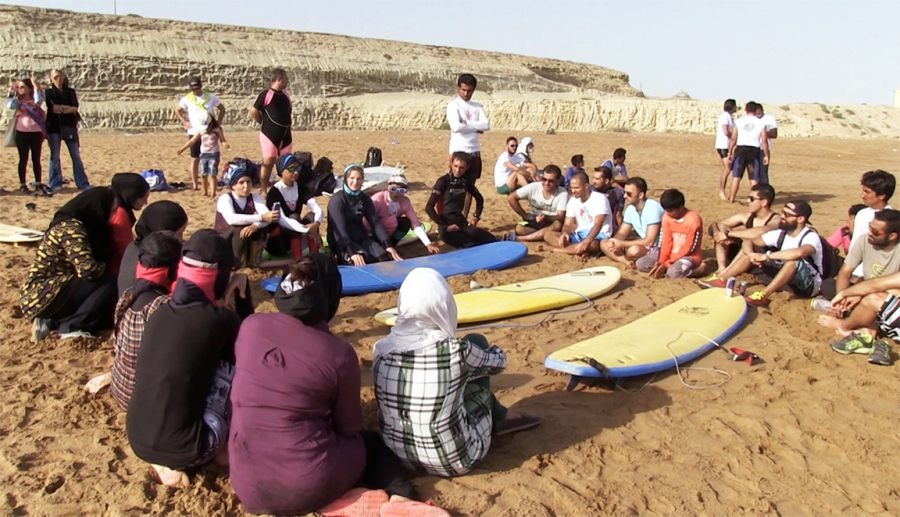 AB: Whom are you primarily teaching (boys, girls, men, women)? And how have the people of Baluchistan received you and this project?

MP: At first, we only had men joining us in the water. But after a few days, women started to join, thanks to Mona's and Shalha's encouragement. Today, the surfing is mixed, with ages ranging from 10 to 35 years old. There might be a few more men than women, but women are definitely surfing. We get a lot of support from the local community; if there are some who don't like what we're doing there, I haven't met them yet. We've only heard positive feedback so far. 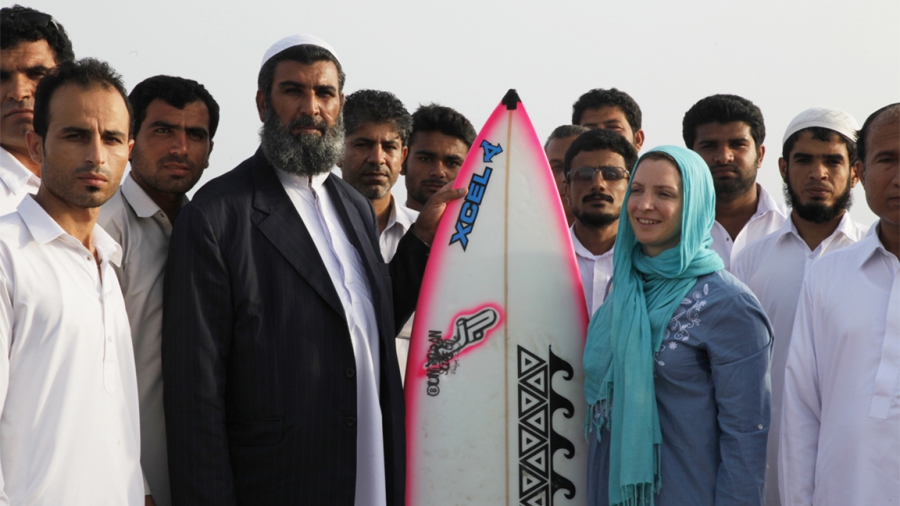 AB: You mentioned that you spoke with a mullah, and in your film he notes that the Koran encourages women to practice sports. Has the Muslim community been supportive of your efforts to get girls and women involved in surfing?

MP: We were invited by the members of parliament of the region to talk about surfing and about the fact that women can surf. A mullah gave us his support and protection and encouraged the initiative. This mullah said that Islam encourages sport even for women because it's good physically and spiritually, and it helps both women and men to be closer to Allah. However, women have to respect the Islamic rules. If they don't respect all of the rules, they can't participate in sports. In the Quran, it's written that water brings calm. This mullah thought that everyone should be able participate in water sports in order to obtain this sense of calm. We were really surprised by how positive the reaction was to our initiative among the community. Some fathers asked us to help get their girls into surfing; some husbands asked the same for their wives. We didn't push anything in the community; it all happened very naturally. 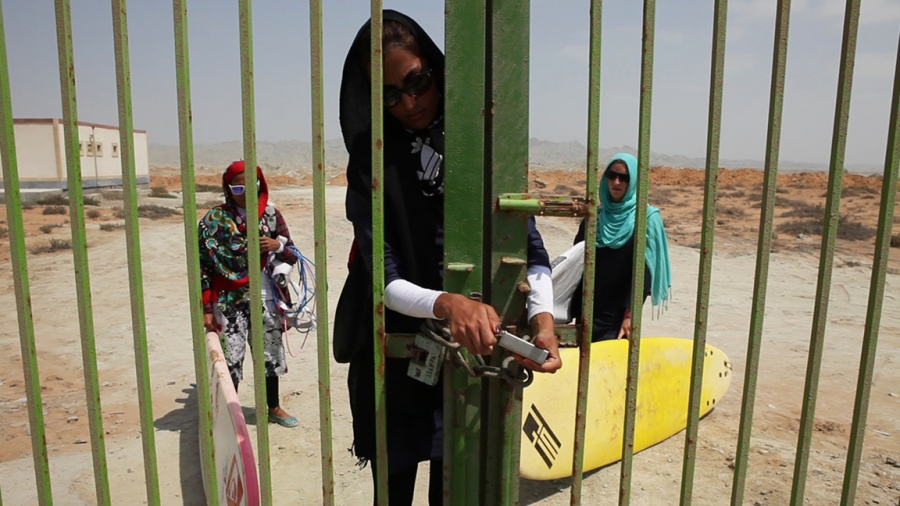 With the help of instructor Shalha Yasini, a group of girls access a private beach to surf.

AB: "Into the Sea" screened in Tehran last November. Were you nervous about how the Iranian public would react to your film? And what was the reaction overall?

MP: I was really nervous about how the audience there would react to it. It's hard to tell a story about a country that is not yours with objectivity and legitimacy. Luckily, I worked with an Iranian film crew for "Into the Sea," which really helped because we could talk about our different perspectives, and they could provide guidance on Iran's complex codes of living. Thanks to them, I was able to show Iran from a different perspective. Iran is a fascinating country and, unfortunately, we never really get the opportunity to see it because of media restrictions. The feedback was very good after the festival. Some Iranians even asked if they could come surfing the next time we go. 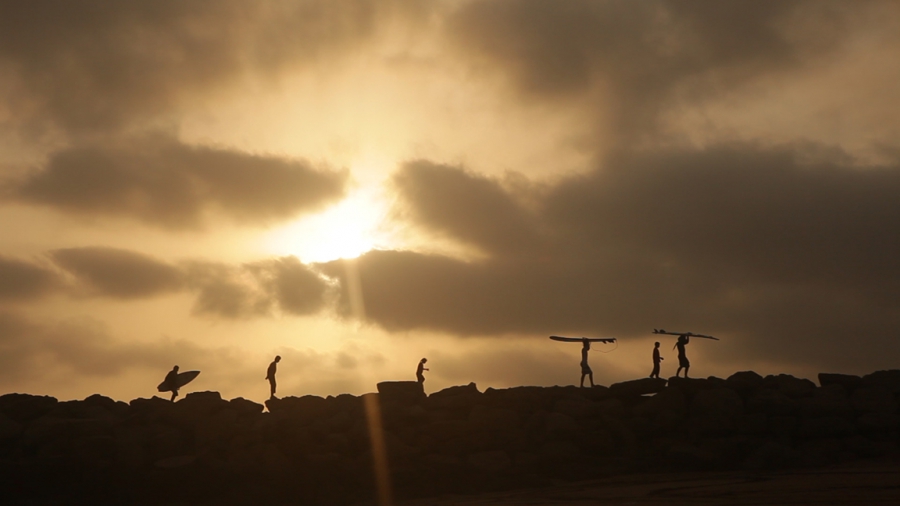 Last day of shooting in September 2013 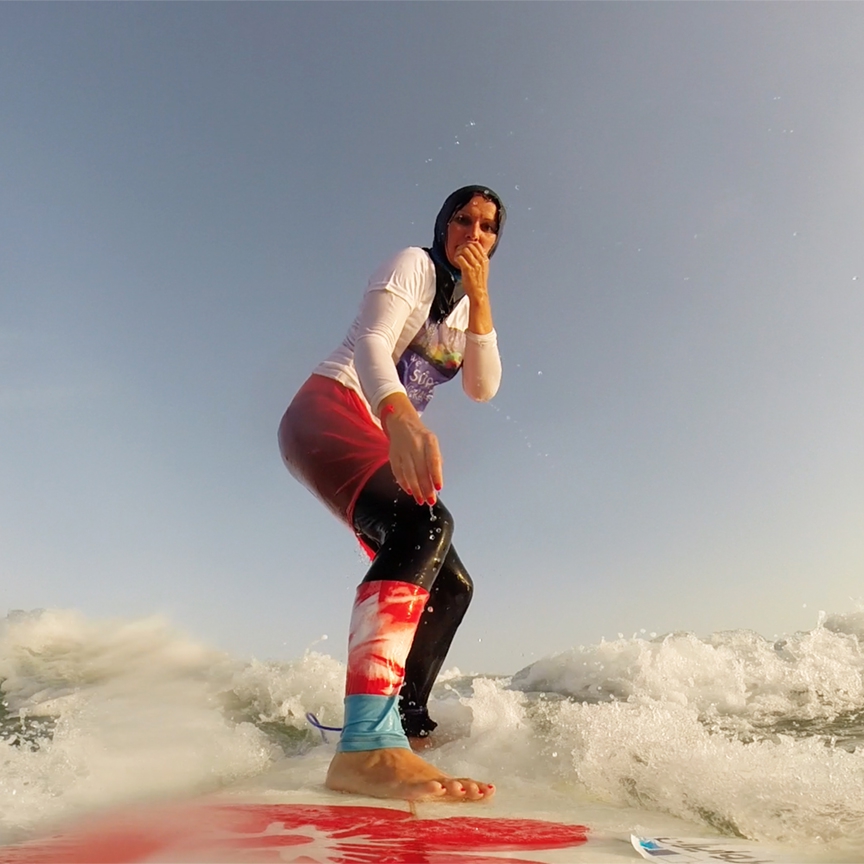 Marion Poizeau is a French filmmaker and surfer based in France. Her second documentary "Into the Sea" was an official selection at the 2014 London Surf Film Festival, the Tehran Interational Cinema Verite, and the San Diego International Surf Film Festival.