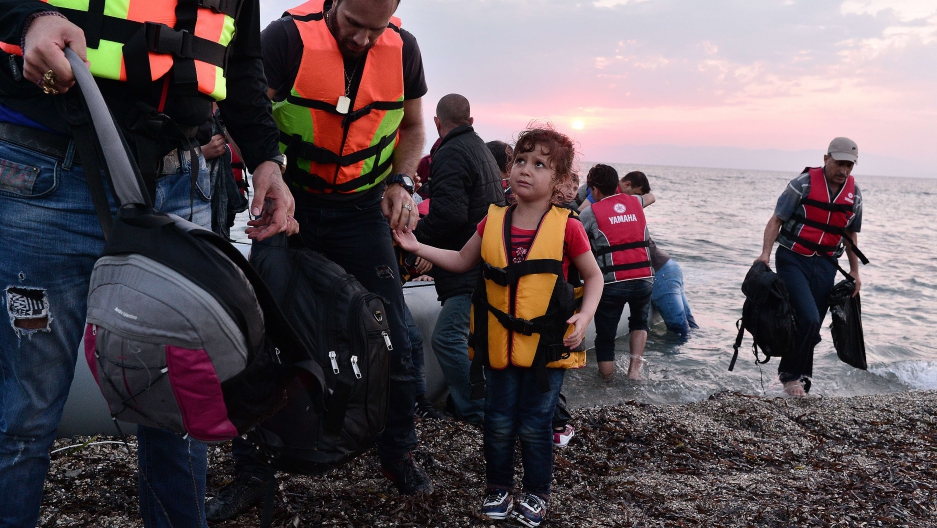 LESVOS, Greece — The boat came into view just after sunrise, gliding quickly across the calm sea. When it ran ashore at a steep stretch of coast, the group of Afghans, Pakistanis, Somalis and Syrians scrambled onto the beach. “Greece? Greece?” a young Afghan called in Turkish. His face broke into a smile when he was told he had made it to Europe.

Men, women and children climbed onto the dusty road and peeled out of their life jackets. Without a break, the exhausted refugees set off, not realizing that they faced a grueling 40-mile walk south to the nearest camp.

Their boat was one of dozens arriving on the Greek island of Lesvos this week. The peak season for migration has yet to begin, but more than 55,000 people have already crossed from Turkey to Greece between January and May, compared to 6,500 in the first five months of 2014.

Lesvos, a popular holiday destination from where the Turkish coastline is plainly visible across a narrow strait, has received the largest number of arrivals: UNHCR has counted more than 20,000 refugees since January. With Greece mired in economic turmoil, the island struggles to cope, lacking funds and manpower.

Its only reception camp, designed for 400 people, houses more than 1,000; a second emergency camp became crowded almost as soon as it was set up. Both are located in the south of the island. Those that land at the northern shore have no choice but to walk along mountainous roads to the capital Mytilene to be registered and receive the documents that allow them to leave for Athens.

“We walked for 38 hours, with little children,” said Ali, 22, a science teacher who fled from Afghanistan with members of his family. Another Afghan refugee, who was traveling with her ill mother, said the journey had taken her three days. “The people on the road didn’t stop, they didn’t help us,” she said.

A Greek law aimed at preventing trafficking prohibits people from helping undocumented migrants. Buses and taxis are banned from taking the refugees to Mytilene even if they have the money to pay the fare. Refugees from Afghanistan and Pakistan who arrived on Lesvos on Tuesday morning begin their walk towards a camp set up on the island.

Katerina Kitidi, a UNHCR spokeswoman, told GlobalPost that they had asked the island authorities to provide transport for vulnerable refugees.

“This is for the Greek state to take action. Many people from the local community are offering support, and many offer to take people who are in need in their vehicles. But according to Greek legislation, these people might face charges,” she said.

Several residents and tourists have defied the ban and given lifts to refugees. Last Sunday, locals drove a convoy of 41 cars from the northern city of Molyvos to Mytilene in protest against the law, picking up migrants along the way.

While they are on the road, the refugees are left to fend for themselves. As no aid agencies operate outside the main reception camp or Mytilene, islanders are stepping in, offering shelter and food.

“It’s a humanitarian crisis. You’d have to be stupid not to see what’s going on,” said Giorgos Tyrikos Ergas, a local author. Refugees from Afghanistan are pictured on arrival on the shores of Lesbos near Skala Skamnias, Greece on June 2, 2015.

Ergas, 33, is one of four volunteers running a overnight shelter for refugees in Kalloni, a town halfway between Molyvos and Mytilene. Until a month ago, they fed and slept a dozen people each week; now, he says, the shelter receives around 200 every day.

“We need a common European policy. We need the government to act. If you think about it, the issue on Lesvos can be resolved at minimal cost — we need buses that will transport refugees to Mytilene, a better registration system, and maybe 10 or 20 coast guards and cops more,” he said.

In the picturesque port town of Molyvos, a grey coast guard ship towers above fishing dinghies and tour boats. When the crew pick up refugees, they bring them to the harbor and call Melinda McRostie, an Australian who has been living on Lesvos for most of her life.

In the field behind her restaurant, McRostie has set up a makeshift camp. Funded entirely through donations, mostly from tourists, she and a dozen other volunteers look after the refugees until they are transferred south. Those picked up by the coast guard are automatically under arrest and will be driven to the camps.

As the number of arrivals increased, McRostie rented a small apartment just to store food, water, milk and nappies. She takes sandwiches to the refugees three times a day. Melinda and her niece Alana prepare dinner for the refugees in Molyvos, on the Greek island of Lesvos.

“It’s something you can’t stop anyway so there’s no point sticking our heads in the sand. It’s here so we might as well do something about it,” she said, stacking sandwiches onto a tray. On Monday morning, the coast guard had rescued 52 refugees when their boat began to sink.

“The water came inside the boat, the machine wasn’t working. Everybody was shouting, the kids were shouting, people threw their bags in the water. Everyone was shouting, help, help, help,” said Tawfiq Amini, 23. A former mechanic with the US Army, Amini fled Kabul after receiving threats for having worked with foreigners.

With calmer waters and shorter distances, the seas between Turkey and the Greek islands are far less deadly than the central Mediterranean route between Italy and northern Africa. As the high season for both migrants and tourists looms, McRostie worries about a further increase in arrivals.

“We need outside help,” she said. “It’s not only Greece’s problem, it’s everyone’s problem. And no one’s come to help us yet.”

As the sun set over the island, volunteers and refugees put up sheets of plastic and tarpaulin while a few miles further east, a boat of 30 Syrians arrived. On Tuesday morning, they were preparing to walk to Mytilene.

“We were so happy the Turkish jandarma didn’t get us,” said Emad Hassbany, a father of two from Damascus. “But I was hoping the Greek jandarma would catch us, they could have taken us there directly.”

Hassbany walked into the police station and tried to get himself arrested so his sons would not have to walk, but to no avail. No taxi wanted to take them; no bus would let them board. In the end, he paid a smuggler to drive them to Mytilene. Emad Hassbany and his sons Magd, 13, and Muhammad, 6, at the bus stop in Molyvos where they spent the night.