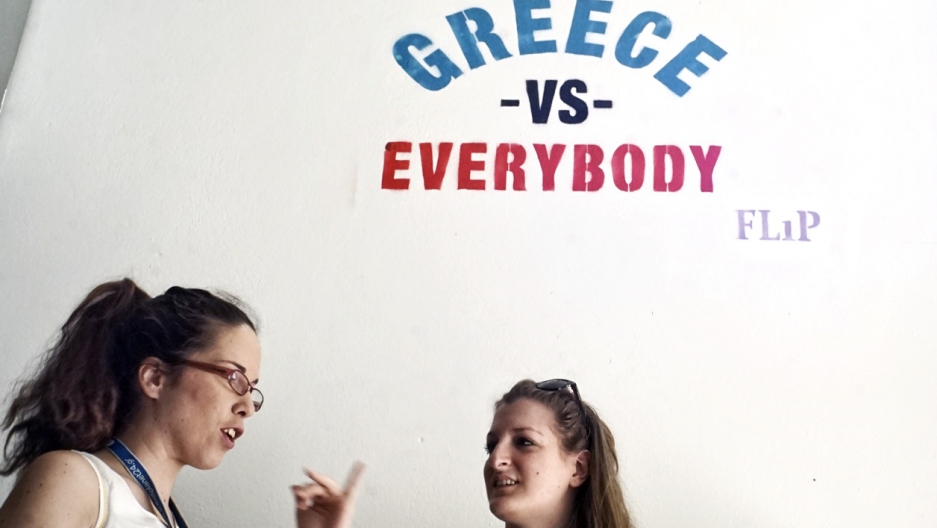 Local women pass by graffiti that says 'Greece vs Everybody' on June 15, 2015 in Athens, Greece. The European Commission has said that Greece and its international creditors need to come to an agreement within the next two weeks to avoid a possible default.
Share

"I understand the Brits, I don't know why they stay in the EU," the man explained, referring to Britain's upcoming referendum on leaving the Union.

"Hungary should leave too," he added during a drive to Budapest airport. "I mean, why are we paying money to the Greeks? They are nice people, but I'm always hearing them boast about not paying their taxes. They think it’s a joke, but we are paying for that."

Greece's hard-left Prime Minister Alexis Tsipras likes to present himself as leader of a plucky little nation battling a bunch of bullies led by Germany, the European Central Bank and the International Monetary Fund.

The IMF has "criminal responsibility" for Greece's economic woes, Tsipras told supporters in Athens on Tuesday.

I mean, why are we paying money to the Greeks? They are nice people, but I'm always hearing them boast about not paying their taxes. They think it’s a joke, but we are paying for that.

By demanding pension cuts and tax hikes in return for handing over money needed to keep Greece's economy afloat, international creditors are seeking to "strangle," "pillage" and "humiliate."

"Historians will recognize that little Greece, with its little power, is today fighting a battle beyond its capacity not just on its own behalf but on behalf of the people of Europe,” he said to rousing applause from lawmakers from his Syriza party.

Yet with dread mounting around Europe that Greece's five-month stand-off with creditors could be about to end in a potentially catastrophic exit from the euro currency bloc and the EU, the comments of that taxi driver in Budapest illustrate how isolated Athens has become.

Many EU countries in Eastern Europe — including Hungary — went through painful bouts of recession and austerity since the global financial crisis of 2007, but unlike Greece have come through it and returned to growth.

Although most remain poorer than Greece, they contributed to two EU bailouts for Athens totaling $270 billion.

Today, taxpayers from Estonia to Slovenia wonder why they are still being asked to pay, especially to a government that's backing away from painful reforms and cozying up to Russian President Vladimir Putin — who is seen as a threat in EU's east.

Greeks have made huge sacrifices since the crisis erupted there in 2009. Their reputation as work-shy tax evaders is exaggerated, but in many places, it sticks. Rich northern countries that provided most of the money propping up Greece over the last five years have long insisted financial reforms in return.

Some have toughened their line since the Syriza-led government was elected in January on promises to end the austerity measures it blames for pushing millions of Greeks into unemployment and poverty.

"The Greek government is behaving increasingly irresponsibly," Yasmin Fahimi, secretary general of Germany's center-left Social-Democratic party. "We will not allow ourselves to be blackmailed."

Junior partners in the coalition government led by center-right Chancellor Angela Merkel had previously been sympathetic to Greek appeals for austerity to be relaxed. But they have become exasperated by a lack of compromise from Tsipras over the past five-months.

The center-left leaders of France and Italy have been similarly disenchanted, leading Austria's Socialist Chancellor Werner Faymann in a lonely role struggling to mediate.

"I stand on the side of the Greek people who in this difficult position are being proposed more things detrimental to society," he said in Athens on Wednesday.

More from GlobalPost: Greece claims Germany owes it $302 billion in reparations for Nazi occupation during WWII

Faymann was hoping to bridge the gap between Greece and everyone else ahead of a EU finance ministers meeting seen as yet another last-gasp effort to strike a deal before Greece's money runs out at the end of this month.

Spain, Portugal and Ireland — which like Greece were forced to seek EU/IMF bailouts at the height of the financial crisis — have become some of Tsipras' harshest critics.

Although there are significant far-left parties offering support in all three countries, mainstream politicians see Tsipras' confrontation with the rest of the euro-zone as threatening their tentative recoveries after years of austerity.

Most of all, they fear a Greek default and possible ejection from the euro-zone, which could trigger market panic and spread havoc around the bloc's other periphery economies.

Tsipras hopes that fear will eventually persuade the rest of the euro-zone to cough up the $8 billion the country needs to keep it from bankruptcy when loan repayments are due on June 30 — and agree longer-term to restructure of Greece's $360 billion debt.

Raising the stakes further, Tsipras is heading to St. Petersburg on Friday for talks with Putin — a reminder of the potential geo-political impact for the West if NATO-member Greece is forced out of the EU.

Nevertheless, talk that the much-feared “Grexit” could become a reality is gathering traction around Europe.

Greece's own central bank on Wednesday acknowledged the possibility for the first time, warning that the country could be facing a "painful course" to default, exit from the euro-zone and the EU.

"A manageable debt crisis ... would snowball into an uncontrollable crisis," the bank said in a statement. "All this would imply deep recession, a dramatic decline in income levels, an exponential rise in unemployment and a collapse of all that the Greek economy has achieved over the years."

That prospect would be scary enough if limited to Greece. But the big fear in European capitals is that a “Grexit” would destabilize the whole bloc, spreading financial chaos across southern Europe and beyond — despite safeguards introduced since the start of the crisis in 2009.

To eliminate that risk, either Greece or the rest of Europe will have to blink sometime over the next two weeks.