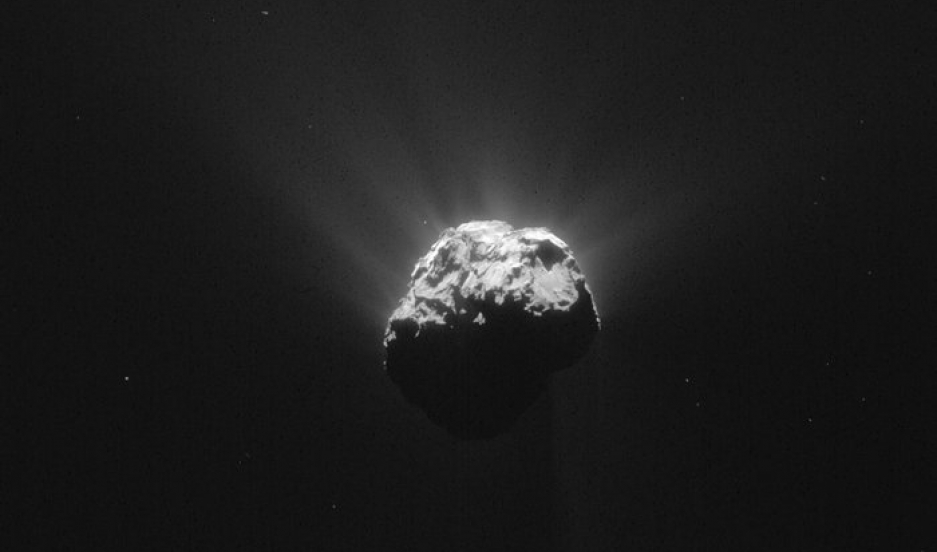 Rosetta’s Navigation Camera shot this image on June 13, shortly before Philae’s wake-up signal was relayed by the Rosetta orbiter and received at ESA's European Space Operations Centre in Darmstadt. The image shows Comet 67P/Churyumov-Gerasimenko. Philae is thought to be resting just outside the rim, towards the top right in this image.

It was like a person emerging from a coma. And the first words when it awoke:

"Hello Earth! Can you hear me?"

Hello Earth! Can you hear me? #WakeUpPhilae

Scientists at the European Space Agency tweeted the news when they received a signal from their comet probe named Philae over the weekend.

The solar-powered probe had been silent, and some feared dead, since it landed on Comet 67P six months ago.

Here’s how the European Space Agency describes what actually happened:

“Hidden by shadows, Philae shut down on 15 November 2014 at 00:36 GMT after completing its main science operations sequence on the comet when the primary battery expired as expected after about 60 hours."

According to the ESA, since March, when the comet started to warm as it got closer to the sun, the orbiter’s receiver had been turned on periodically to listen for signals from the lander.

On the evening of June 13, a weak link was established between the Rosetta orbiter and the lander. Data on the status of the lander was received, though it comes from a yet-to-be determined time in the past, as much as several days to a few weeks. It may not reflect the lander’s current status.

That data was relayed to ESA mission control, where the party started.

Monica Grady, a science advisor on the Rosetta mission, says its great news that Philae is up and running again.

“I was absolutely delighted, really thrilled when I heard to the news that Philae had ‘phoned home’, it was wonderful!”

Grady says the fact that Philae “landed not in the middle of an open plain, but it landed at the edge, possibly under a cliff, possibly even wedged into a crevasse” could mean it was literally in the shadows so that its solar powered batteries ran down. So, what's changed?

"A huge amount of material has been removed from the surface of the comet on its travels, by the heating effect of the sun.” So the net effect is that “there’s now enough sunshine, which is falling on Philae’s solar panels, to charge up the solar batteries.”

So, why do we care so much about a big chunk of rock hurtling through space?

“Comets formed at the birth of the solar system and they are an accumulation of the really primitive materials, the dust, the gas and the ice that the whole of the solar system was made from, and those materials haven't been changed. They’re a deep, frozen time capsule of those early materials,” says Grady. This exploration is now opening up the lid of that capsule and seeing what’s there.

The challenge now facing ESA scientists is to start communicating with Philae. Until the orientation of the antenna can be tweaked, Grady says “there can only be snippets of conversation twice a day” between Philae and Rosetta

ESA is hoping to tweak Rosetta’s location in relation to the probe by maneuvering its orbit closer to the nucleus of the comet.

But that’s not easy as it might appear because the comet’s surface is constantly changing. But Grady is hopeful that Rosetta, Philae and Space Operations will soon be talking, and that Philae might even have some stored data it can transmit. She says “it will be absolutely fantastic if that data were photographs, showing what’s underneath Phylae and showing the landscape around it. That would be really interesting.”