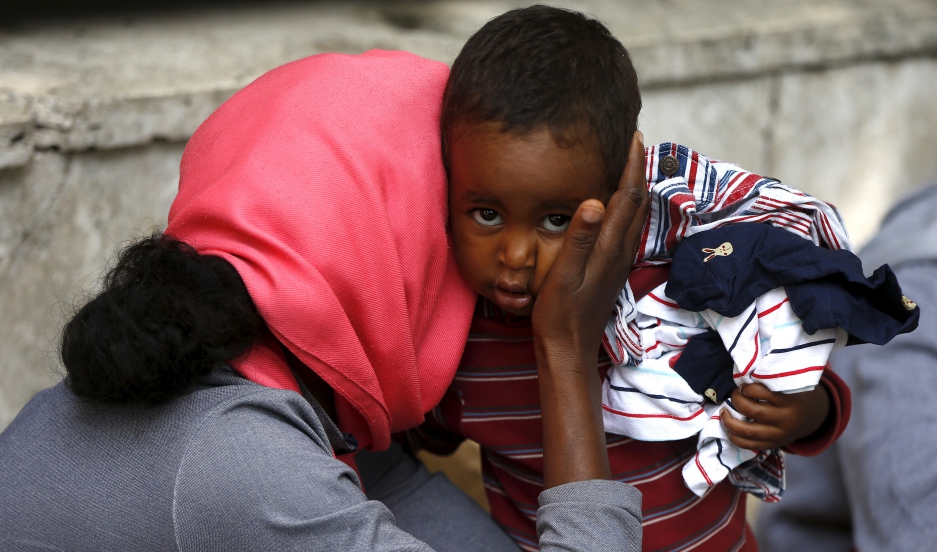 A mother embraces her child next to the Tiburtina train station in Rome.

The chaos and crowds at train stations in Rome and Milan this week include hundreds of bedraggled travellers sleeping in the rough outdoors, some on scraps of cardboard.

"It was almost like standing in a little patch of a camp in Darfur," says reporter Megan Williams. "It was a dusty camp, there was the Red Cross tents, kids kicking around a ball."

Williams visited some of the hundreds of migrants stalled in Italian train stations and on its border crossings.

The migrants — mainly from the Horn of Africa — have survived a perilous journey by sea to arrive in southern Italy. They've made their way to Rome and hoped to head further north. But, increasingly, they're being turned back by tough immigration restrictions newly imposed by Italy's neighbors.

A 28-year-old welder from Eritrea who only used his first name, Rezene, was among those sleeping outdoors near Rome's main train station. He fears what might happen to him at the hands of Italian police if he ventures far from the train station. Rezene is not in Italy legally because, like many of the migrants, he did not allow Italian officials to fingerprint him when he arrived in Italy. Under an agreement known as the Dublin regulation, when refugees arrive in Europe they must be registered and fingerprinted in the country that they enter and that country is responsible for processing the immigrants' claims.

But up to half of the migrants who enter Italy will not allow themselves to be fingerprinted because they want to settle elsewhere.

"Some people even burn their fingertips in order to not be recorded," Williams said. "They want to go to Germany or Sweden or countries that are better equipped to deal with them, or countries where they have families established already."

Italian officials are expected to raise the plight of the migrants at a European Union interior ministers' meeting Tuesday in Luxembourg. Italians are threatening to "hurt" the EU if it doesn't act to end the migrant crisis by taking actions, including setting up a refugee processing camp in Libya.

Williams says it's far from certain what Italian officials mean when they threaten retaliation.

"It's not clear quite yet what Italy calls its Plan B," she adds. "Its foreign minister says that's a surprise at the moment."