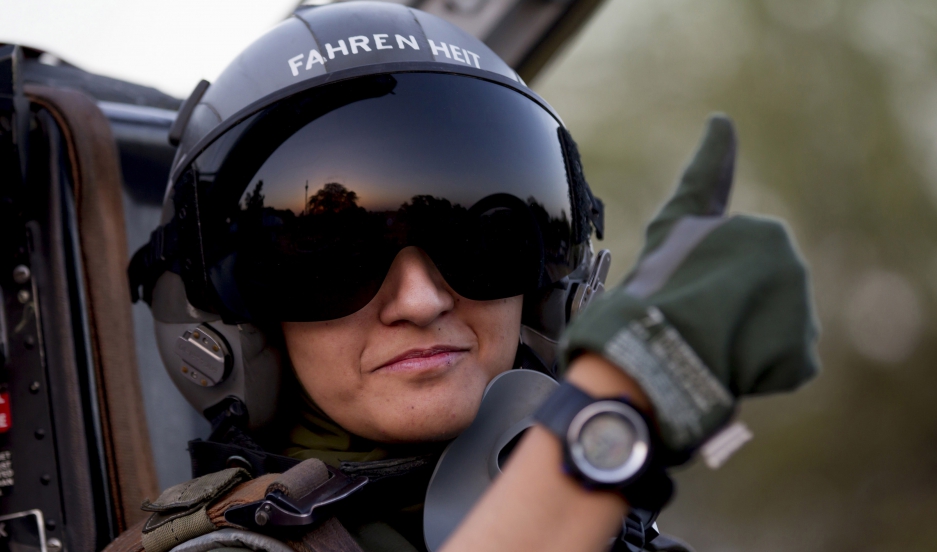 Ayesha Farooq, 26, Pakistan's only female war-ready fighter pilot, gives the thumb-up sign from the cockpit of a Chinese-made F-7PG fighter jet at Mushaf base in Sargodha, north Pakistan June 6, 2013.

Lt. Ayesha Farooq's father died when she was little, leaving her mother to raise two daughters.

"Ayesha and her sister [grew up] in an environment where it’s pretty hard to survive if you don’t have a male protector," says Bina Shah, author of several books including, most recently, "A Season for Martyrs."

Shah, who has written about Farooq, says her father was a physician and she grew up watching him take care of people.

“His absence in her life made her realize how important it was to have a protector of the family and she decided she was going to step into that role," she says. Farooq joined the air force academy to train as a fighter pilot.

According to Shah, Farooq's mother was completely supportive of her daughter's path. Her extended family, however, didn't approve.

"But Ayesha won them over with her determination," Shah explains. "Today, they ask her for advice on how their daughters can join the air force,” she says.

While it didn't start out that way, today her male colleagues treat her like one of them. For example, when reporters interested in her story inquire about their "female colleague," it surprises them.

Shah says they know that they’re all there because of their ability.

“She passed all the tests, she scored very highly. She consistently topped her class,” Shah says.

Farooq’s is a success story, but Pakistan remains a complicated society when it comes to women's roles.

“We’ve had a woman head of state, at the same time, women are still being discriminated against in law and not protected as they should be by the legal system here,” Shah says.

But she is hopeful. She says more Pakistani women are taking on new and unconventional roles.

“What we’re seeing is huge change. ... What’s coming out is that all these issues about women are being highlighted when before they were never paid attention to. ... I’m really excited myself to be witnessing this in this day and age,” Shah says.