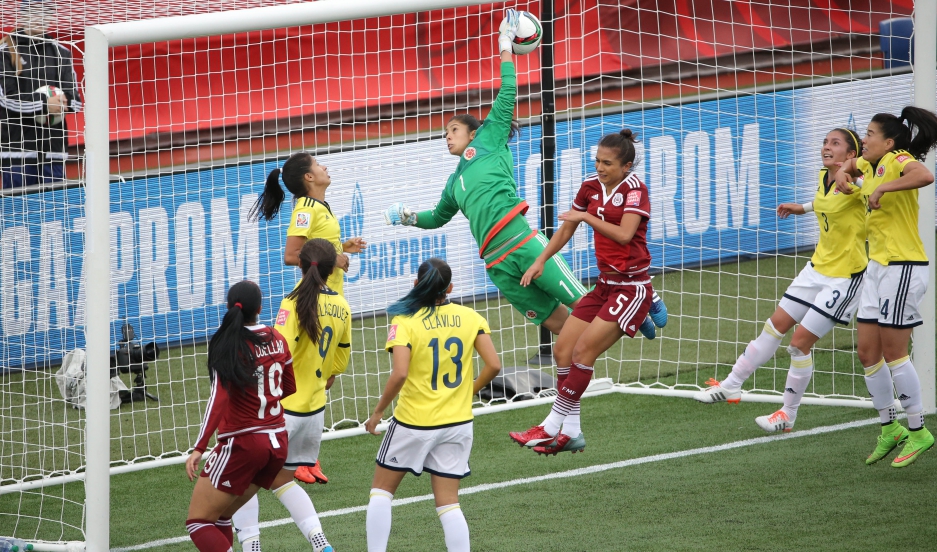 Would FIFA do this to men?

No it would not.

"Players are concerned about the heat that's coming off of the field because the pitch, the turf is made of rubber and plastic and it sort of roasts in the sun and it's certainly not the case with natural grass,'' says Laura Armstrong, who is covering the Women's World Cup for the Toronto Star.

At the opening match on Saturday in Edmonton, the temperature of the playing surface was reportedly 120 degrees.

The Women's World Cup, under way now, has been about the differences between scandal-plagued FIFA's decision to let men play on natural grass but let women roast on artificial turf. FIFA even rejected an offer from a company to pay for natural sod for the games. Instead, now-disgraced FIFA chief Sepp Blatter suggested women wear tighter shorts to rev up interest in the game.

This is the first World Cup — men's or women's — to be played on artificial turf. Many players, most notably US soccer star Abby Wambach, supported a lawsuit against FIFA alleging discrimination. US forward Sydney Leroux also spoke out against FIFA’s controversial decision to force the women to play on artificial turf in all six of Canada’s World Cup soccer venues.

“Between men and women… this is not equal. For us to be playing the biggest tournament for women’s soccer on artificial grass is unacceptable. The game is completely different. It’s fake. So you don’t know how it’s gonna bounce. You don’t know how the ball is gonna run. It’s terrible for your body. The constant pounding. You’re running pretty much on cement. … We’re the guinea pigs.”

The lawsuit however was eventually dropped.

Nonethless, the heat is taking a toll. The Canadians, the Chinese and Norwegians have complained that the heat causes fatigue to set in quicker and is slowing down the game.   Norway’s midfielder Lene Mykjåland said after Sunday’s game that it was difficult for either team to "get a decent tempo and rhythm."

Herdman talks heat - it's hot at pitch level because of rubber/plastic from the turf. Says #CAN needs to pace themselves better through game

There are also injuries especially bruises and burns caused by artificial turf when players slide tackle or fall hard on the surface. Armstrong says these injuries undermine the beautiful game. “That's not something players want to be thinking about when they're going in for a slide tackle. They don't want to be concerned about how it's going to affect their body.  They just want be focusing on the play and it certainly detracts from some of the excitement of the game. There's an undercurrent at the tournament that's a little bit unfortunate and it wouldn't happen in the men's game or in any tournament on natural grass.”

But if you put the issue of turf aside, the tournament’s off to an exciting start. Armstong says her personal highlight was Canada’s win on Saturday, “They had at the 92nd minute a penalty shot scored by our captain, the team captain Christine Sinclair and the reaction of the 53,000 fans just getting so excited that this woman who really is a touchstone for soccer and Canada just  brought it home.”

Overall the quality of play has been excellent, says Armstong.  She says a chill went down her spine when Colombia scored their its first-ever point in World Cup history when they got a goal 82 minutes into their match to tie against Mexico. And then there was Marta, the Brazilian superstar striker who’s known for her dazzling offensive play.