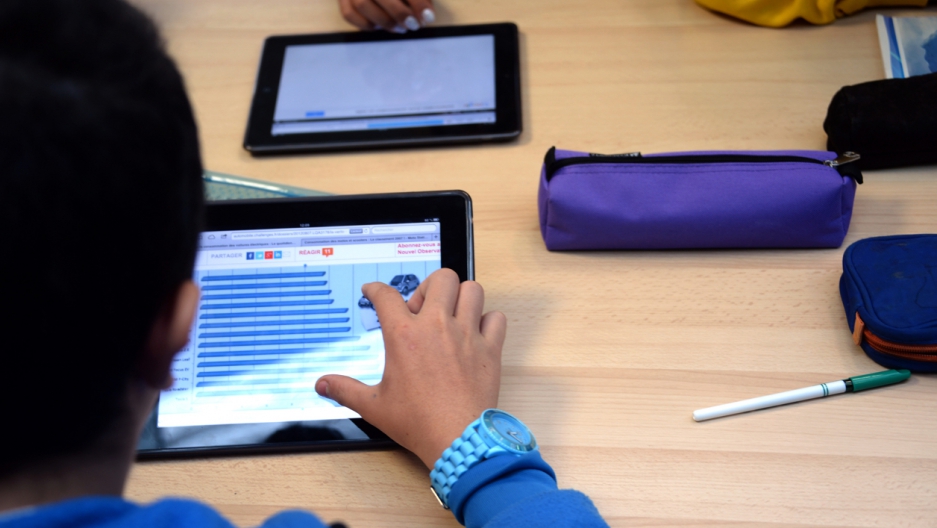 A child is never too young to start on the path toward violent jihad — at least according to the logic of Britain's Counter-Terrorism and Security Act of 2015. Luckily, there's an app for that.

UK schools have an important role to play under the new law, which will start being enforced on July 1. In the language of the act, headmasters, teachers, and other staff must "have due regard to the need to prevent people from being drawn into terrorism." It's not fully clear how educators are supposed to do that, although it will probably involve some combination of working with law enforcement, assessing students for signs of radicalization, training staff and parents in how to spot those signs, and monitoring online behavior.

The act — you might argue — turns every British schoolchild into a potential terrorist. It also creates a new market for technologies that will help teachers spy on their little proto-jihadis.

Software companies are all over it. They're promising to help schools combat terrorism and/or cover their legal bases in the event that one of their students grows up and joins the Islamic State or whatever, in this distant future, happens to be the terror army du jour. After all, the Islamic State's infamous Jihadi John was once "just a regular schoolboy growing up in west London." Somebody, sometime should have noticed something was wrong — or at least that's the implication.

"New measures proposed under the new Counter-Terrorism and Security Bill place a statutory duty on educational institutions to prevent the radicalization of their students and staff," one software company claims. "This new iteration of the Securus Education solution will provide a significant benefit in meeting these obligations."

How do they work?

It's all a bit terrifying. Watch, for example, this school teacher talk with a hint of glee about using Impero to broadcast to the entire class whatever is on their devices' screens at that moment.

Those companies are taking those network surveillance systems and wrapping them in a new counterterrorism skin.

Keyword filters will be able to identify when a student types words or phrases that maybe, possibly, you-never-know indicate a child might be at risk of radicalization.

For Impero, those words include, among others, "YODO" ("you only die once"), "jihadi bride," "War on Islam," and "John Cantlie" (a British journalist held hostage by the Islamic State).

You've got to worry, though, whether some teachers or schools — authorized or not — will use this technology to monitor the students they suspect are already, by virtue of race, religion, nation-of-origin, or culture, inclined toward violent extremism. Will they just wait for an email alert telling them that Jenny in grade four just searched for "jihadi bride?" Or will they be targeting some children more than others? You know, boys named Mohammad or girls in headscarves.