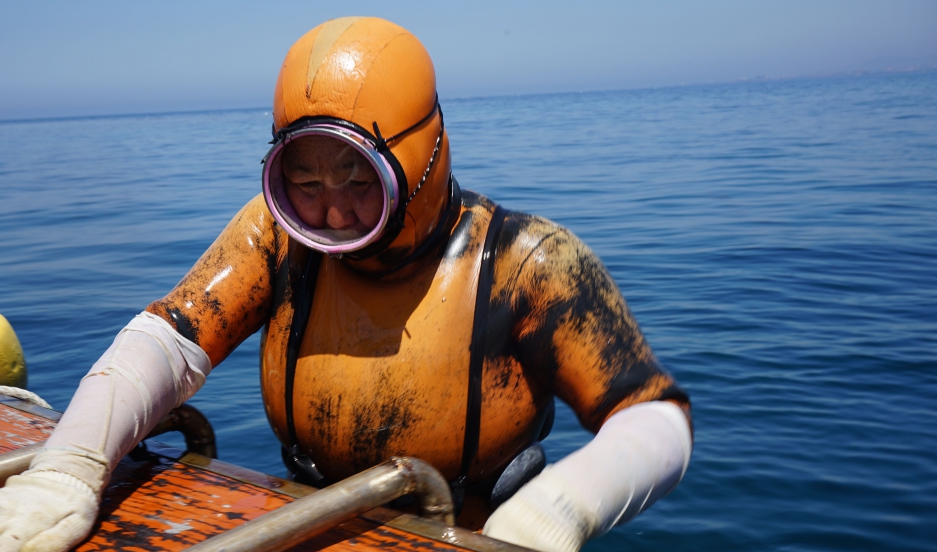 A haeynyo woman climbs aboard the boat. They wear orange diving suits so commercial ships can spot them more easily and steer clear.

I’m on a boat with a group of Korean grandmothers — but it’s not a cruise ship and there’s no shuffleboard in sight. It’s a motorboat and these elderly ladies are sporting wetsuits and goggles. They’re in their 60s, 70s, even 80s, and they’re about to jump into the ocean with what look like small garden hoes in hand.

These divers, known as haeynyos, free-dive for abalone, conch, octopus and seaweed. For centuries, they’ve been the breadwinners for their families, and the economic engine of Jeju Island, off the coast of South Korea.

Haeynyos dive without oxygen tanks, plunging up to 60 feet in the water, holding their breath for up to two minutes at a time. They bob up and down in the frigid water for up to four hours, depositing their catch into buoyed nets.

After the dive, the haeynyos swap their dive masks for floral sunhats.

It’s dangerous, physical work, and each year a handful of women don’t re-emerge — killed by the sharks, commercial ships and riptides that abound.

Some call these women mermaids, but don’t be deceived by the mystical name. These women are tough. They shove me out of the way to haul their catch of dangling octopus on deck, and I toppled into a mound of wet seaweed more than once. But when the boat races back to shore, they shed their goggles for wide-brimmed floral sun hats, and they transform into little old ladies with wrinkled faces again.

Haenyos have been called Korea’s matriarchs, mostly by the foreign anthropologists who have flocked to the island to study them. But I’d say they’re actually more like Korea’s first working mothers, who took on both the role of caregiver to their children and breadwinner for their families.

Kyung Ja Hong, who’s still diving at nearly 70, started when she was 12.

“When my mother emerged from the sea, she’d lay my siblings down to sleep by the bulteok fire pit, while drying her harvest of seaweed beside them,” she recalls.

Pregnant haeynyos used to dive until the day they gave birth. Their newborns slept in baskets on the shore, cradled by the ocean breeze, waiting for their mothers to return from the sea to nurse them. 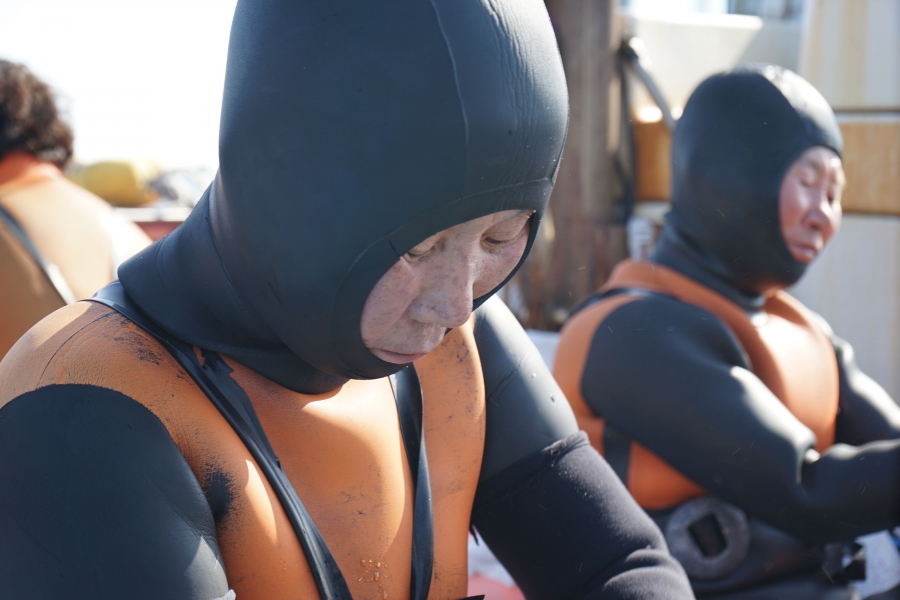 Haeynyos preparing for their dive. Commerical fisheries have largely emptied the waters so the divers have to travel further out to find their catch.

There were nearly 30,000 haeynyo divers in the 1950s. Now there are fewer than 4,000 and most are over the age of 60. With the rise of commercial fisheries, divers have sent their own daughters to college, to work jobs in the cities. And their daughters aren’t keen on their mothers continuing with the dangerous work of diving.

But it’s the aging women like Kyung Ja who insist on doing it.

“My daughter, she tells me to stop, rest at home. But if I just stayed at home then I’d get depressed. In our diving group, we have an 81-year old haeynyo, and when I see her, I think I can do that too. It’s better than being a burden to my children, to earn my own keep, don’t you think?” 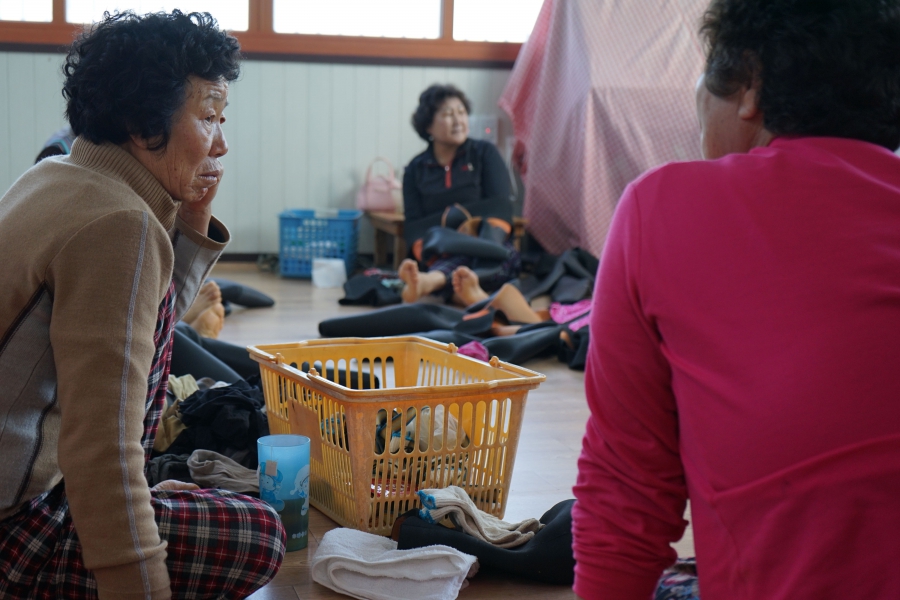 Divers at the bathhouse, where they weigh their catch and talk about their husbands, their health, and their grandkids.

I join the divers at the tarijang — it’s the bathhouse where they weigh their catch and shoot the breeze. They gripe about their husbands, brag about their grandchildren and talk about their doctors’ bills.

The haeynyos always dive in groups, and on any given day, if someone is sick, no one goes out to sea. They’ll visit the hospital or the home of the diver together instead. The younger divers check in on the older ones when underwater, to make sure they’re safe and can resurface.

“Since haeynyos put our lives on the line together, there’s a deep understanding between us,” Kyung Ja says. “If someone forgets their undergarments, another diver will even say, 'Here use mine, wear mine!'" She says she doesn’t know of any other work colleagues in Korea like hers — and I might agree. 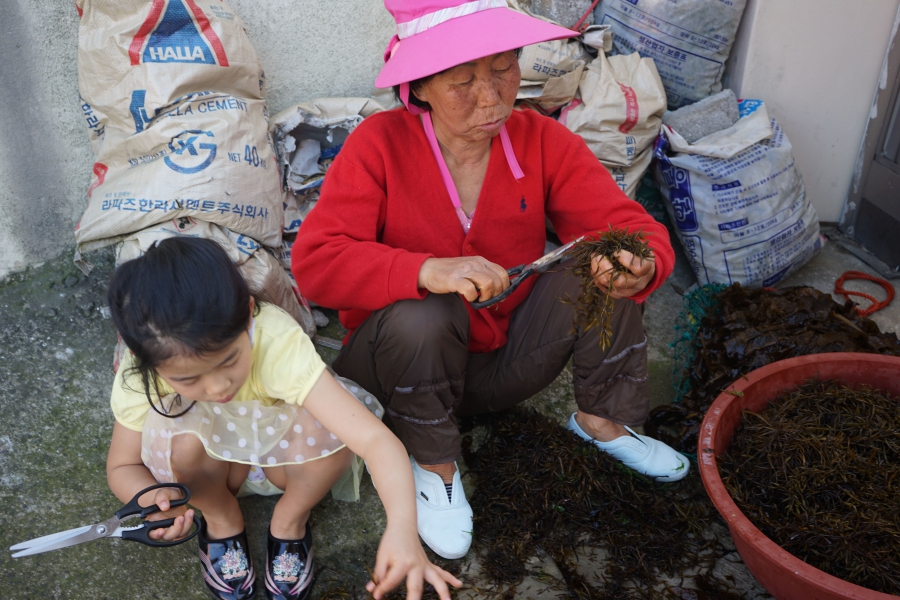 Kyung Ja Hong with her 8-year-old granddaughter, snipping seaweed from the day's catch.

Kyung Ja hangs her diving suit to dry on a clothesline, strung across the courtyard of her traditional home. When she crouches at the gate, snipping the seaweed from the day’s catch, her 8-year old granddaughter hurries over with a pair of scissors to join her.

I ask the little girl what she wants to be when she grows up. She cups her eyes with her hands and says, “A haeynyo ... I want to wear those goggles and to catch sora!”

Kyung Ja beams with pride. While she mourns the end of the haeynyo tradition, she wants to teach her granddaughter to dive — not so she can make a living — but so that the work of the haeynyos and all her grandmothers won’t be forgotten.

“So Grandma,” the 8-year-old asks. “What do I need to learn first? To become a haeynyo?”