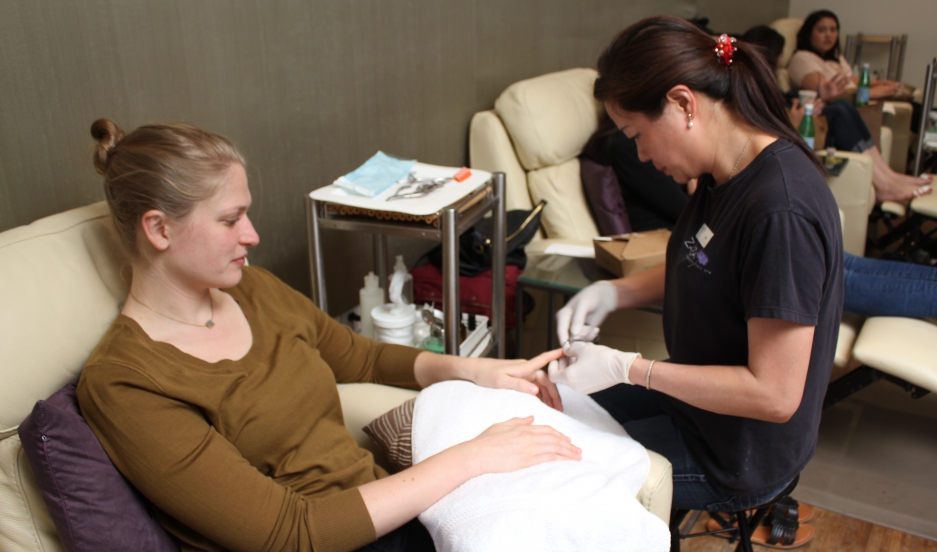 Spot the nitrile gloves? You'll spot them at Zaza Nail Salon in San Francisco, a new member of the California Healthy Nail Salon Collaborative. To qualify as one of the collaborative's "healthy" salons, all manicurists must wear gloves and work in a well-ventilated space, among other requirements.

Nationwide, there are 17,000 nail salons — outnumbering Starbucks in the US — and they cater to the rising demand for “mani-pedis.” In California alone, there are about 8,000 salons. Of those, just 55 have signed up with a small, non-profit collaborative that is getting more attention in the wake of a New York Times’ series that showed the dark side of the New York City's nail salon industry.

The project is called the California Healthy Nail Salon Collaborative, formed in 2005 by Oakland’s Asian Health Services, working with other local health advocates and city and county officials. As the salon industry faces concerns about workers’ rights, this group has a primary mission to improve the health and safety of salon employees and their owners, who often work as manicurists as well.

To see what this looks like up close, head to Leann’s Nails in Alameda, across the bridge from San Francisco. It shares the block with a donut shop and a check-cashing place, and looks like many salons popping up in middle-class neighborhoods. There’s soothing music, puffy massage chairs, and a small water fountain. A little bell rings when you walk in.

Lan-Anh “Leann” Truong has done nails in California for more than 20 years, and she's from Vietnam, like most salon workers in the state. Eventually, she worked up to owning her own salon, employing about five employees. She's proud of her business — and something more: a machine with a black ventilation tube jutting from it. It clashes with the salon’s pastel decor. But Truong doesn’t care. She loves this thing.

“Before, we do the acrylic nails, artificial nails, we don’t have a machine like this,” she says, turning on the ventilator, which whirs like a fan. The device vacuums up the harmful dust that can enter the staff's lungs, especially when they work with acrylics. She got the ventilator a few years ago — when she became one of the first salons to be certified by the Healthy Nail Salon Collaborative’s program. 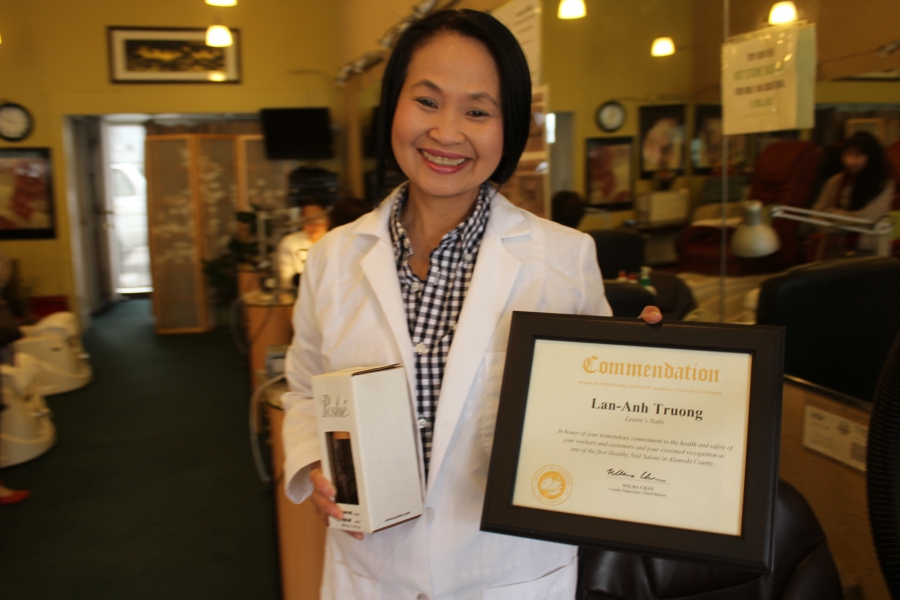 In 2013, Lan-Anh “Leann” Truong, who owns Leann’s Nails in Alameda, California, was one of the first nail salon owners to be certified by the California Healthy Nails Collaborative.

Certification takes work — recruiting and training salons one by one, answering questions about chemicals and safety in workers' own languages. The project also lobbies to get cities and counties on board as partners—to help offer salons rebates for ventilators, and reward them with a certificate and a "healthy salon" decal to display on their front window. Santa Clara County—which includes much of Silicon Valley—is about to sign on. New York might also adopt the model.

Julia Liou, who directs program planning at Asian Health Services, co-founded the collaborative after hearing a stream of stories about salon workers' health problems. “Everyone had acute symptoms,” she says. “Asthma, respiratory illnesses, irritations of the nose or throat. But then, on top of that, we heard these other stories — cancer, these other more chronic illnesses. That’s when we really had to question are these workers like the canaries in the coal mine?”

Research by Asian Health Services and scientists such as Thu Quach, an epidemiologist with the Cancer Prevention Institute of California, suggests that prolonged exposure to chemicals in nail care products can be a culprit.

Truong knows this first hand. For years, she felt terrible after work: “I feel a headache. I’m coughing a lot, and my eyes are very itching. They turned red. But I didn’t know.”

She didn’t know about other ways to work until she joined the collaborative. Free trainings in Vietnamese have showed Truong and her employees which products have fewer hazardous chemicals, why they must wear latex gloves, sterilize their tools and put trash away so toxic odors don’t pollute the place. Truong and her employees also wear white lab coats now to protect their skin.

For Quach, steps like this are part of a personal mission. “My mom was both a hair and nail salon worker,” she says. “I was actually very aware of the stuff she was using and she often used it in the house. We also said, ‘Wow, this stuff really stinks!’”

Her mom developed non-Hodgkin's lymphoma. Quach knows that can be rooted in genetics or the environment, or both. “You never know,” she says. “But my mother always said that nobody else in the family got cancer and that the only thing that made her different was that she was around these chemicals all days.”

Quach is struck by how little oversight there is of cosmetics companies — a billion-dollar industry. The Food and Drug Administration (FDA) does not force companies to disclose safety information about their chemicals, or list the ingredients for products sold to professionals, like salon owners. (The FDA does require that companies list ingredients for retail sale.) So the onus is on salon owners to request ingredient information. The California collaborative helps salons navigate which chemicals do what and danger levels.

Health advocates also point to safety standards, including permissible exposure limits, set by the Occupational Safety and Health Administration. Most date back to 1971, when the agency was formed, and are based on science from the 1960s, says Debbie Berkowitz, a senior policy advisor at OSHA in Washington, DC. The standards also do not account for what happens when the skin absorbs chemicals, which can happen often during salon work.

Updating the standards means a drawn-out bureaucratic process. “Because of the legislatively mandated requirements on OSHA, when we update a regulation or a standard we have to do significant amounts of analysis both on the health affects and also about economic feasibility,” says Berkowitz. “It can take us between seven and 10 years to update a standard.” 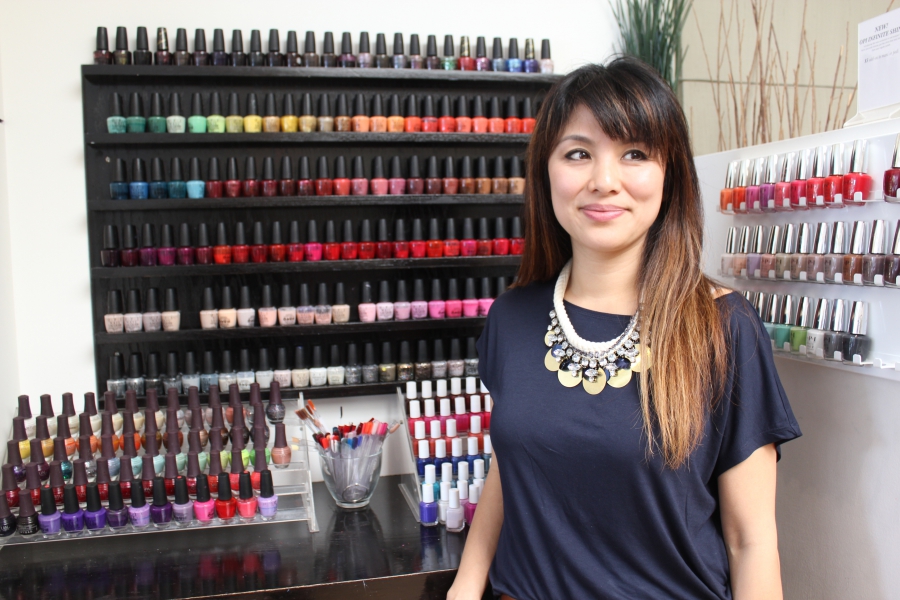 Until big changes happen, the non-profit collaborative hopes that as awareness grows, more people will take the lead like Rachel Chang, who owns Zaza Nail Salon in San Francisco. She took a bold step when she opened her salon about a decade ago, deciding to not offer nail services that require more toxic products — acrylics, fake nails and gels.

She also charges $55 for a manicure and pedicure, higher than other salons in lower-income areas. It helps that she is located near wealthy tech start-ups. But Chang says her services shouldn’t be a bargain, whatever the location.

At Truong’s salon, a manicure and pedicure costs $30. She says working healthier hasn’t forced up her prices much. She says she is fine paying for things like gloves for her employees, and greener products are coming down in price.

You can buy anything, but you cannot buy your health, she says. “No, I can’t pay for that.” 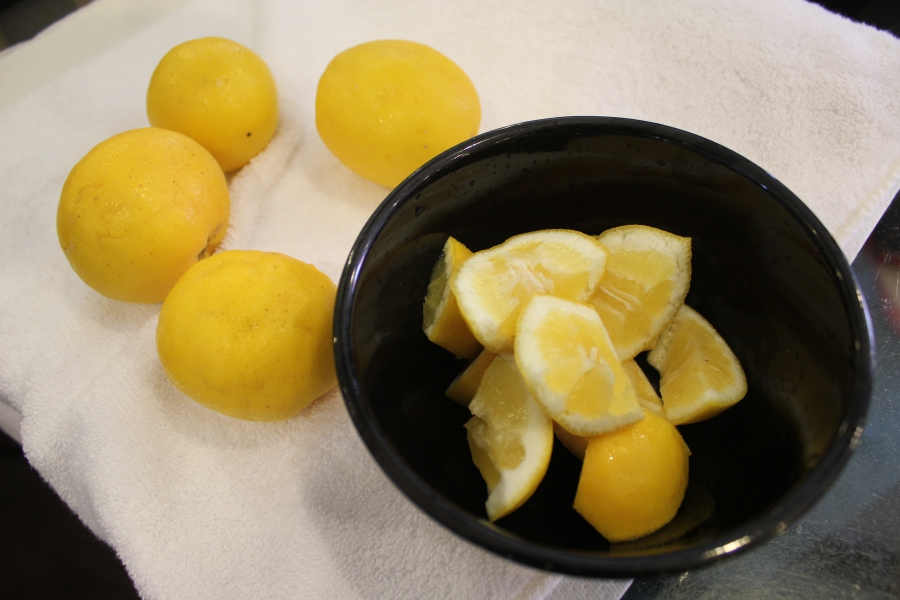