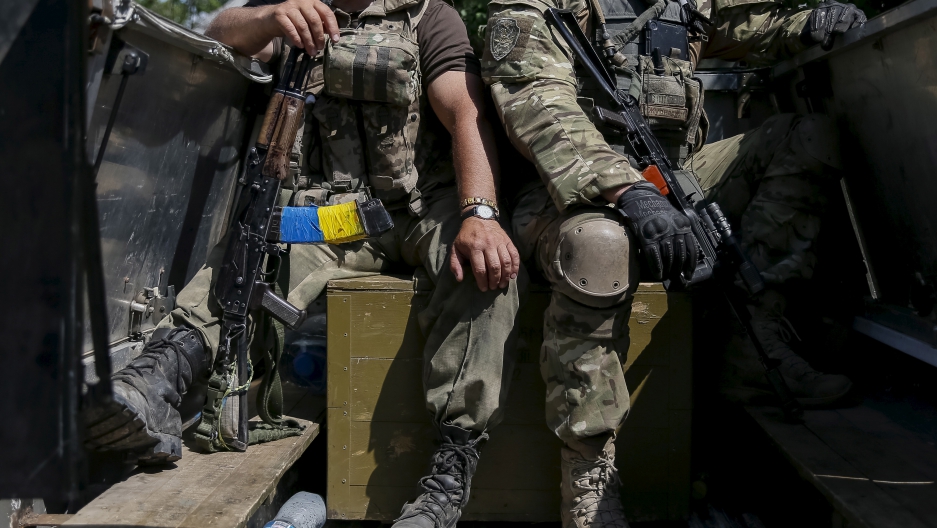 Members of the Ukrainian armed forces pictured in the town of Maryinka, eastern Ukraine, on June 5, 2015. Ukraine's president told his military the day before to prepare for a possible "full-scale invasion" by Russia all along their joint border.
Credit: Gleb Garanich
Share

A day earlier, Moscow-backed separatists launched what officials here said was their largest assault in months, leaving at least two dozen dead outside the rebel stronghold of Donetsk.

And just the week before, Reuters documented a Russian build-up of troops and heavy weaponry near the border with Ukraine, sparking fears that an anticipated summer offensive might soon begin.

But some experts say we shouldn’t expect that “full-scale invasion” any time soon.

Observers have long warned that Russian President Vladimir Putin may have his sights set on snatching more territory, with plans to craft a land bridge to Crimea. A man holding a Russian flag looks out the window during celebrations for the first anniversary of the Crimean treaty signing in Sevastopol, March 18, 2015. Russia's flag was flying across Crimea on the anniversary of what President Vladimir Putin called the region's historic "return home" after Russian troops seized control of it from Ukraine.

But goals that lofty would require a serious commitment. For one thing, Russia can’t afford that — militarily or otherwise.

“Russia appears no longer to want to seize, annex, [or] occupy eastern parts of Ukraine,” he told GlobalPost in an email Friday, “and its current political aims in Ukraine, including destabilizing it politically and economically, can be achieved by a limited conflict in Donetsk and Luhansk regions.”

There were hints of that decreased appetite last month, when rebel leaders announced they were shuttering their “Novorossiya” or “New Russia” project — the ambiguous political union of the two separatist regions in Ukraine once publicly supported in Moscow.

That suggests the Kremlin may be forcing rebel leaders to stick to a broadly autonomous arrangement with Kyiv, observers say.

“Perhaps Putin has realized that the expansionist project overextended itself; it is now too dangerous to continue beating the war drum,” Andrei Kolesnikov, an expert at the Carnegie Moscow Center, wrote last month. A map of recent clashes between pro-Russian separatists and Ukrainian forces.

That doesn’t mean the Kremlin’s not interested in a fight.

Stoking fierce but lower-level combat — like the kind seen in Marinka last Wednesday — is Putin’s best (and cheapest) bet at distracting Ukraine on its toes and stymying its efforts at reform, critics say.

That, in turn, would make it easier for Moscow to keep Kyiv in its orbit and consolidate support at home.

But it’s also telling that there were no signs of overwhelming Russian support after the apparent rebel defeat this week. That’s usually been the case after previous key battles aimed at snatching more territory, such as in Ilovaisk last summer and in Debaltseve last February.

Make no mistake, though: Russian troops are in Ukraine, bolstering the rebels’ fighting forces.

The Organization for Security and Cooperation in Europe (OSCE), which monitors the conflict, has spotted clear signs of Russian involvement. So have droves of bloggers and activists.

Oh, and captured Russian soldiers — special forces, actually — even say so themselves.

So where does that leave things in the east?

In an “unstable frozen conflict,” according to Kokcharov, the IHS analyst  — meaning an embryonic version of the legal limbo a handful of other former Soviet territories remain in after fighting bloody wars.

Moving forward, he says, Putin will just play it by ear.

“The conflict is quite likely to evolve into a larger version of Transnistria or Nagorno Karabakh,” Kokcharov said, referring to the separatist territories, “and details of the evolution will depend on the developments on the ground.”