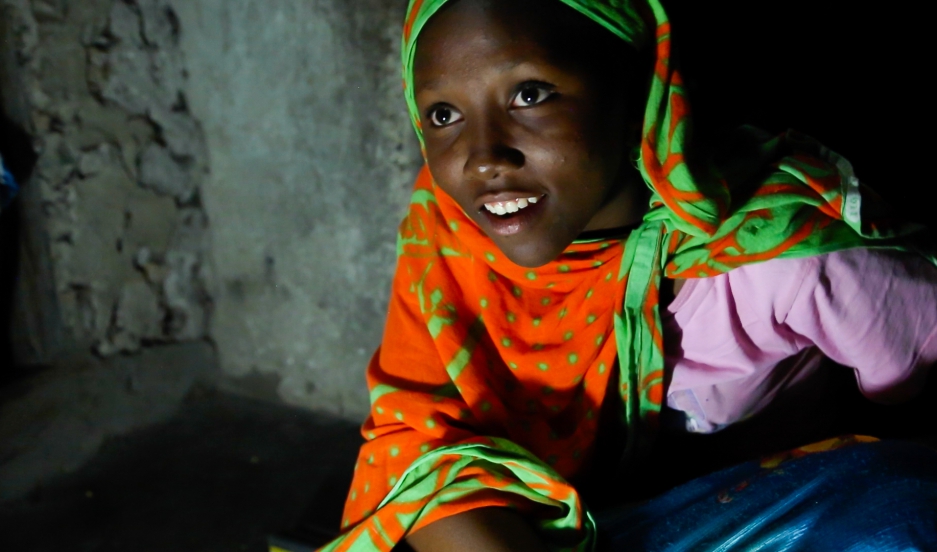 Fourteen year-old Nuru Sheha studies at night in the light of solar-powered LED lights at home in the village of Matemwe, on the Tanzanian island of Zanzibar. He family's first electrical system was installed by one of Zanzibar's 13 "solar mamas," illiterate women trained in India to be solar power engineers. Able now to study at home for the first time, Nuru's mother says she is doing well in school and wants to be a teacher. Since girls are expected to do house chores during daylight hours, night is the only time they can study. She’s doing well in school and dreams of becoming a math and English teacher.

Take a step back from Zanzibar’s white sand beaches and big hotels and you’re in a very different world. One where the island’s dusty, inland villages largely go dark once the sun sets. This is when the differences between people who have electricity and those who don’t are most pronounced.

Kasia Hassan is one of those without. The mother of nine lights her home in the village of Matemwe with tiny kerosene lamps. They’re barely brighter than a candle and fill her house with a thick black smoke. Hassan thanks God that one of her kids hasn’t knocked over a lamp and started a fire, something that happens a lot here in Tanzania. 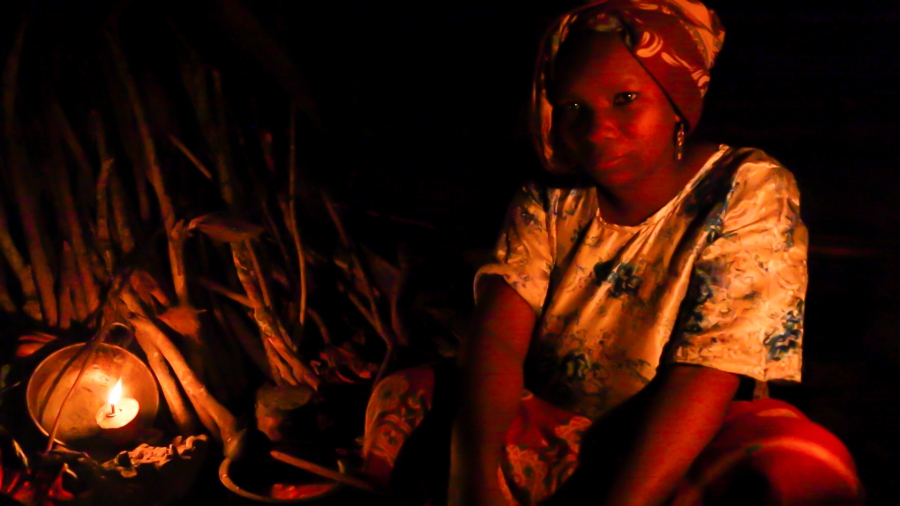 Kasia Hassan, a mother of nine who doesn’t know her age, cooks dinner for her family in the dim light of traditional kerosene lamps called kibataris. The lamps emit a thick, noxious smoke and are prone to tipping over and starting fires, but Hassan says she hasn’t considered solar panels because it is something her husband would decide.

But she says having electricity is something she’s never really considered. It’s a decision for men, she says, something for her husband to decide.

Just a few doors away it’s a very different picture. Instead of sitting in a dark, smoky room, Kanao Sharif Haji is weaving reed mats under bright LED lamps running off a battery charged by a small solar panel on the roof.

For this brighter, cleaner and safer system, Haji pays less than half of what her neighbor does for kerosene. But that’s only the beginning of her savings. Haji says the work she does at night has raised her family’s income by up to $15 a month — a huge sum in these parts. 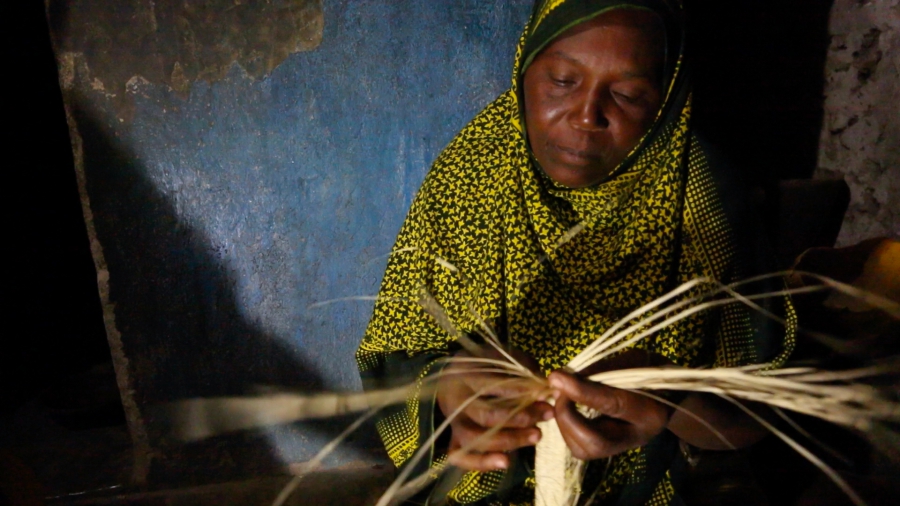 Kanoa Sharif Haji, a 45 year old mother of eight, weaves reed mats at night under a bright solar powered LED light at her home in Matemwe. This new work at night earns her family an extra fifteen dollars a month, a huge amount in these parts.

The prospects for her eight children are also brighter, especially for her 14-year-old daughter, Nuru Sheha, who studies beside her. Haji says Nuru is doing well in school and dreams of someday becoming an English or math teacher.

Haji’s family has benefited from a simple fix to a vexing problem. In sub-Saharan Africa electricity is still a far off dream for most. With the lowest electrification rate in the world and less than 10 percent of the rural population having access, Africa has been called the “society in eternal darkness.” According to the International Energy Agency, closing that gap with conventional power would cost an estimated $19-billion a year in investments over several decades.

Even solar panels are out of reach for poor families like Haji’s, if they have to buy them outright. So instead, they hired a group of local solar engineers to install and maintain their new system, for about three dollars a month.

That by itself is a big change in this isolated and very traditional place. But who those solar engineers are represents an even bigger change. They're Zanzibar’s 13 new “solar mamas” as they call themselves — all illiterate mothers from villages like Matemwe, who were quietly recruited and trained by an Indian NGO called Barefoot College.

So far these “solar mamas” have electrified more than 600 households on the island.

The system Mize Juma Othman was installing recently on a metal roof included the photovoltaic panels, a battery, an inverter, three LED lamps and a phone charger. It took half an hour to complete and once the power was switched on the owner of the house plugged in her phone, a new convenience she used to pay someone else to do.

It was a moment when everything changed for her family, something Othman says she relates to.

She recounts her own journey to becoming a solar engineer, a choice that cost her her marriage. Othman says when she decided to go to India for the six month training program her husband was supportive at first. But then other men convinced him that her new knowledge would make her promiscuous. So he divorced her.

Othman says she’s now remarried, to a man who isn’t bothered by her career. Her salary of $60 a month doesn’t hurt.

She says she knew money before she knew men and hopes to pass that strength and knowledge on to her young daughter, and to women from all over Africa, something she’s about to get a chance to do. Othman and Zanzibar’s 12 other female solar engineers will be sharing her skills with other local women at a new solar training center funded in large part by the government here.

The new center “will bring us to the reality that once women are empowered, they can do anything,” says Asha Abdallah, with Zanzibar’s Ministry of Empowerment, Social Welfare, Youth, Women and Children.

Abdallah adds that many solar projects failed here because they were run by outsiders who never trained local people to take care of the equipment.  But she says this one’s different because it’s involving the communities themselves. The center will train two dozen women a year, each of whom will install and maintain 50 systems a year. It’s the first of six solar training sites Barefoot College plans to build in Africa, from South Sudan to Senegal.

And with prices for solar equipment falling fast, this community-led model is spreading quickly and changing minds in even the most traditional villages.

In Zanzibar’s Kandwe village, shopkeeper Pandu Matti Salum now stays open late because of his new solar system. Salum says his shop has become a gathering place for the village after dark, which also means more business for him. He says he now plans to expand his store, all thanks to the female solar engineers, who he says he supports 100 percent. 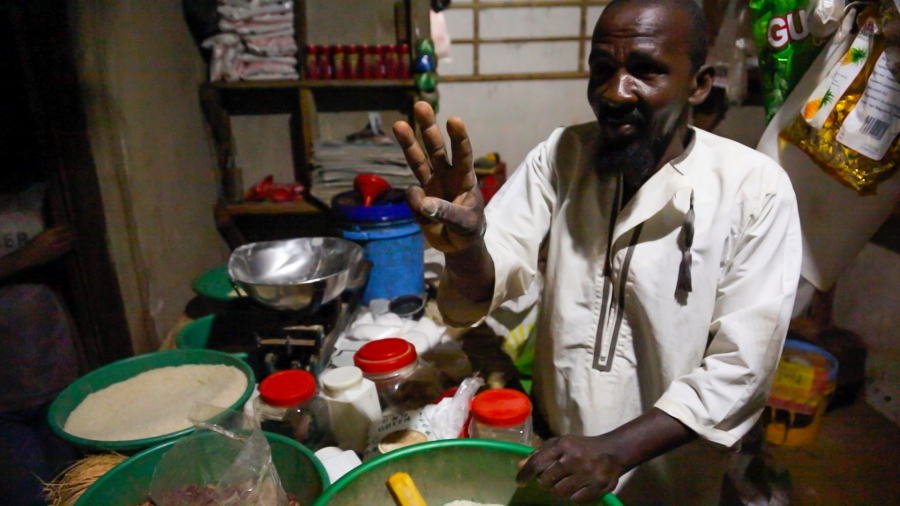 Kandwe village shopkeeper Pandu Matti Salum says says his new solar panel and LED lights have made his store has a nighttime gathering place and increased his sales. With the new income he says he plans to expand his shop, marry a third wife and have more children.

Salum acknowledges the changing role of women in this conservative Muslim society, but the changes the solar mamas are bringing to his life only go so far. He says he has two wives and eight children, and with the growing success of his shop, he hopes to marry a third wife and have more children.

The strength of tradition is evident after dark in Kandwe, when only village men gather to pray at a small Mosque, lit by kerosene lamps, and there are no women on the streets. It’s a reminder that change takes time.

But as one of the solar mama’s put it, “we are 13 now, and when we are old, we will be many, many more,” bringing light, and change, to Zanzibar and beyond. 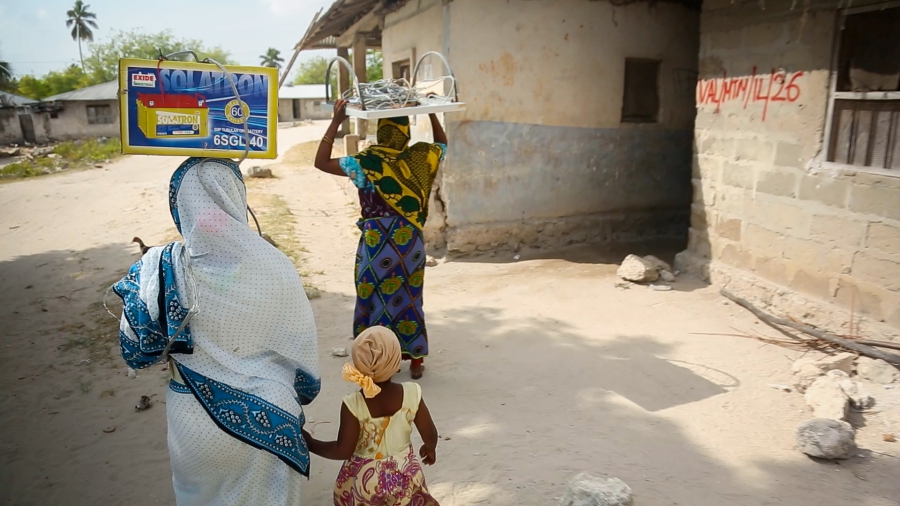 Two Solar Mamas carry equipment from their village workshop to a home in Matemwe where they will be installing a new system. A new center being built on the island will train a new batch of 24 female solar engineers, each of whom who will install and maintain 50 systems a year. It’s the first of six solar training sites Barefoot College plans to build in Africa.