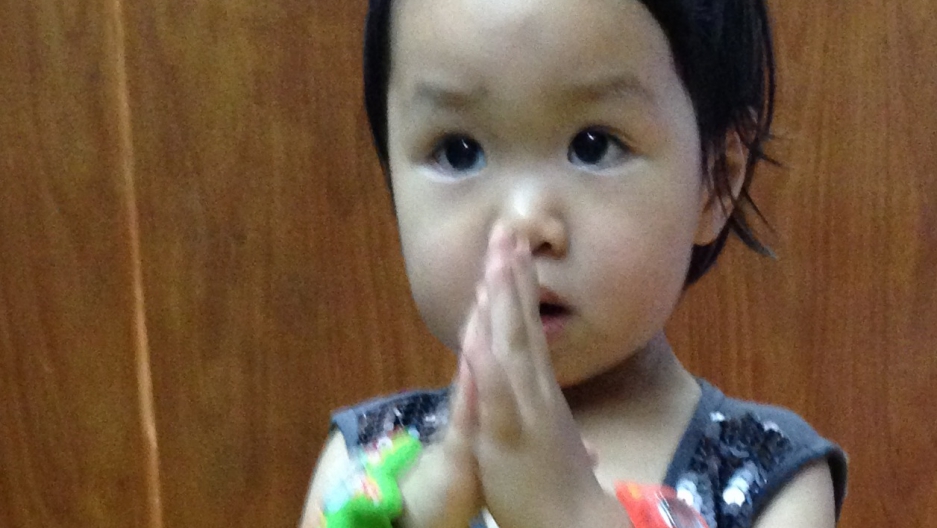 Following her death, Matheryn "Einz" Naovaratpong was flown from her native Thailand to the US for cryonic preservation. Her family hopes she can be brought back to life in a future era of profound technological breakthroughs.
Credit: Courtesy of the Naovaratpong family
Share

BANGKOK, Thailand — If all goes according to plan, a little Thai girl nicknamed Einz who is now dead will some day read this sentence.

That plan, however, requires incredible faith in technological advancement. As it stands, Einz cannot open her eyes. Her body has been cremated. All that remains of Einz is her head — which is now filled with medical-grade antifreeze and stored in a vault in Arizona.

Einz, whose formal name is Matheryn Naovaratpong, died from an aggressive strain of brain cancer in early January. She was nearly 3 years old.

Her death would have unfolded as a private tragedy had her parents not made a profound choice. They decided that Einz would become the youngest human — and one of very few Asians — to undergo cryonic preservation.

“We believe death can be overcome in the future,” says Sahatorn, the girl’s 41-year-old father. “Human beings are seeing technology increasing exponentially. It just doubles, doubles, doubles. If our computer systems proceed like this, they’ll double their abilities minute by minute. That would allow us to solve the world’s biggest problems.”

This sentiment will be familiar to anyone versed in the theory of the “Singularity,” a postulated era of dazzling possibility that adherents believe will be ushered in by explosive scientific breakthroughs in the coming decades.

This belief in exponential scientific achievement, steadily gaining adherents in the West, is embraced by Einz’s parents. Both Sahatorn and his wife, Nareerat, hold doctorates in electronics engineering. And both share the view — as do believers in the Singularity — that mortality is a problem science can fix.

That faith compelled the grieving engineers to build a capsule for their newly deceased daughter that could regulate her body’s temperature during the long shipment to the US. (There are no cryonic facilities in Asia.) Einz was collected by the US-based Alcor Life Extension Foundation, the world’s largest cryonics operation. The non-profit foundation charges $80,000 to “neuropreserve” a human’s brain.

The goal, as worded by Alcor, is to “save lives by using temperatures so cold that a person beyond help by today’s medicine might be preserved for decades or centuries until a future medical technology can restore that person to full health.”

Einz is the foundation’s 134th “patient.” In Alcor’s view, she is not dead per se: “If indeed cryonics patients are recoverable in the future, then clearly they were never really dead in the first place.”

GlobalPost interviewed the Naovaratpong family at length. We asked how they arrived at this decision, how they would explain this choice to skeptics, and how they imagined life for their daughter if this experiment succeeds.

Their comments have been edited for length and clarity.

On Einz's origins as a cryo baby 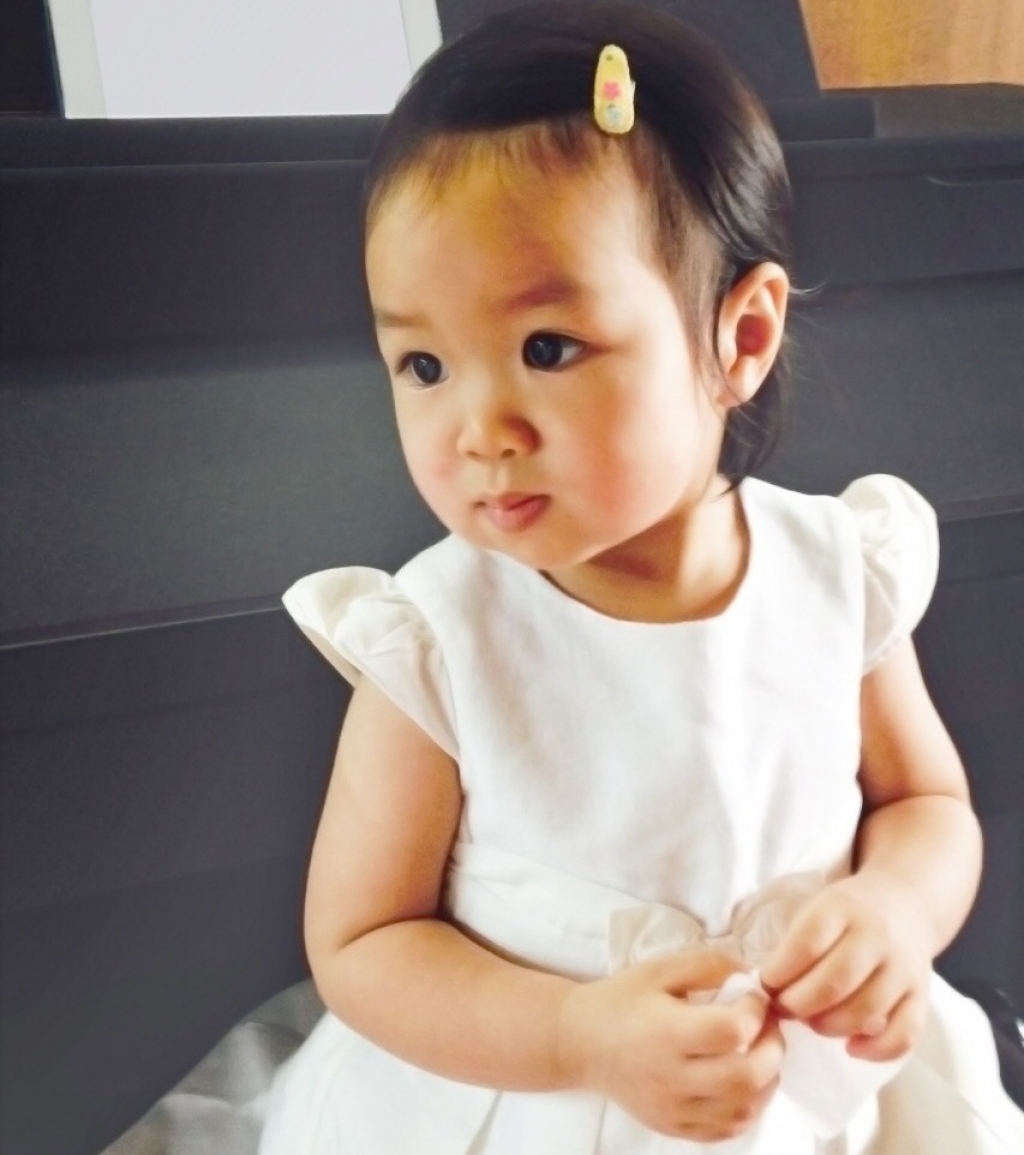 Matheryn "Einz" Naovaratpong from Thailand died in January before her third birthday. She is the youngest person to undergo "neuropreservation," a controversial technique in which human brains are stored in hopes of reviving consciousness in the future

Einz was not conceived au naturel. She began as an embryo frozen in a lab one year before her actual birth. (Her mother has a medical condition that prevented her from carrying a child; Einz was birthed by a surrogate.) “That was her first cryonic phase,” Sahatorn says. “She was an IVF baby.”

Just as technology made her first life possible, the Naovaratpong family believes it may give her a second life. “Just think about IVF,” says Dararat, Einz’s aunt, also an engineer. “If you told someone about that 100 years ago, they’d think you were crazy.”

Most Thais go by nicknames because their formal names often sound too grandiose for casual speech. Einz’s parents wanted to call her “ai,” which means “love” in Chinese. Unfortunately, this also sounds like “cough” in Thai. “So we changed it to Einz, kind of like Albert Einstein,” Sahatorn says. “But to us, it still stands for love.” They also have a 14-year-old son called Matrix, a name inspired by the metric system.

On helping the future Einz understand her origins

Einz’s family is amassing artifacts about her life on hard drives. If she’s revived, they say, she can turn to this cache of video clips, family photos, hospital records and personal letters to understand her origins. The family adds new material each week. “We’ll be including a PDF of this article in her files,” Dararat says.

Roughly 300 people are cryonically preserved at various facilities; more than 1,000 have made post-death cryonics arrangements. But Einz is the only one who was too young to offer verbal consent. Einz’s family says her good spirits throughout dozens of painful operations indicated a fierce will to live. She endured 12 surgeries and 40 chemotherapy and radiotherapy sessions, yet often emerged smiling.

They were particularly amazed when she awoke — defying doctor’s predictions — following surgery to remove a brain tumor.

“We reached the end of our human limitations to help her,” Sahatorn says. “We felt that, as her mother and father, we had to give her another chance. If we didn’t, we’d feel conflicted.”

On inspiration from sci-fi and home experiments

“My generation has seen Star Wars. And even movies like Alien with people preserved for more than 100 years as they travel to new solar systems. That’s one of my inspirations,” Sahatorn says. “But we also have a big family that holds science contests. We’ve competed to freeze flies and bring them back to life. You can freeze them for 20 minutes until they stop moving, as if dead, and bring them back to life. We’ve also done this with goldfish.”

But the Naovaratpong family is banking on advances in tissue regeneration that will supply Einz with a human body. “I know it could be possible to load your mind into a machine but the software would run in a totally different way,” Sahatorn says. “I want Alcor to revive Einz in an original body. If the technology isn’t ready, please wait. No need to go too fast.”

On participating in her cryonic preservation

Einz died on Jan. 8 in Bangkok. Two Alcor representatives — one a retired neurosurgeon — were on standby to perform a “field cryoprotection,” which involved injecting her with medical-grade antifreeze and lowering her body temperature to around 80 degrees Celsius below zero.

The family didn’t just observe this graphic procedure. They participated. “The (neurosurgeon) said, ‘Anyone who wants to go should go now,’” says Dararat. “All of us stayed. They said, ‘Really? You’re not afraid?’”

Minutes after Einz’s death, the family was helping place their daughter inside the temperature-controlled, futuristic coffin they’d constructed in the family’s own factory.

Einz’s head was not separated from her body until it reached the foundation's facilities in Arizona. Transporting corpses is somewhat common; ferrying severed heads tends to draw suspicion from customs agents. “If you send only a head, you may run into problems,” Sahatorn says. “The officer at the X-ray machine may say, ‘Oh no, a human head!”

On the possibility of reuniting with their daughter 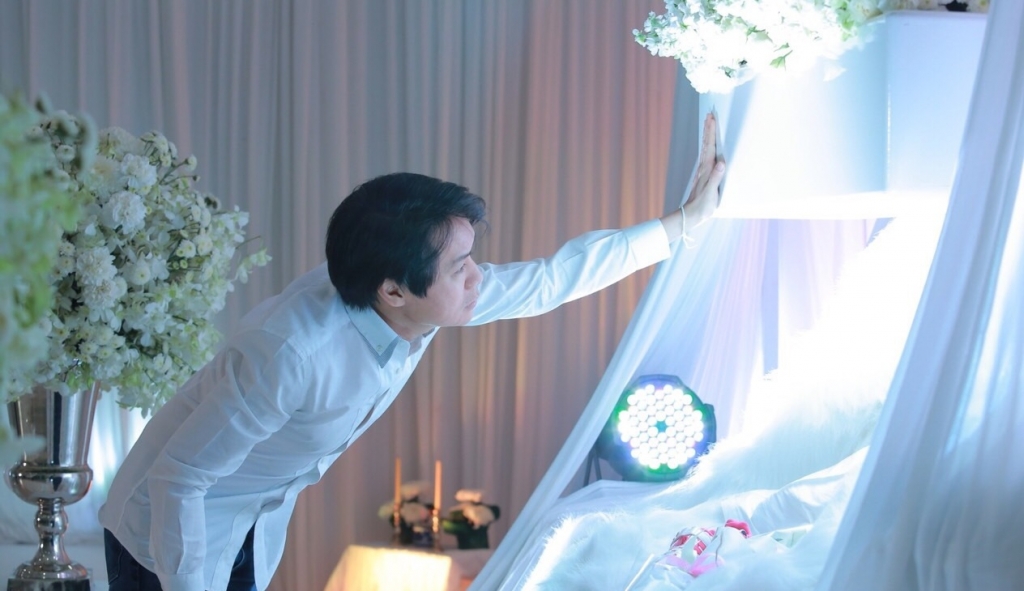 Sahatorn Naovaratpong, 41, at his daughter's bedside. Following her death, he chose to preserve her brain in hopes she may one day be revived and and given a new body via theorized tissue regeneration techniques.

Both of Einz’s parents intend to cryopreserve their bodies. But if the odds of Einz’s revival are slim, the odds that all three can be successfully revived and reunited are even slimmer.

“Honestly, it will be hard to see her again,” Sahatorn says. “The probability is very low.”

Einz's parents also hold out hope that life extension breakthroughs will keep them alive long enough to witness their daughter's revival. “If I don’t die in the next 30 years, maybe we’ll meet again,” he says, “That’s how long it might take for science to figure out how to rejuvenate an old man and extend his life.”

“I don’t know what our future society will look like,” Sahatorn says. “But today, many children who have no families grow up to be great people. Look at Steve Jobs.”

If a foreign-born child’s brain is encased in a new body on US soil, does that individual get US citizenship? Her family assumes the answer is yes. “When she wakes up,” Sahatorn says, “she’ll be American. If something like World War III happens, we’ll try to go retrieve her.”

On the family's conception of the soul

“When I was young, I thought of souls as globes of light that can float into new bodies and be born again,” Sahatorn says. He now believes that notion was childish. His go-to analogy for explaining consciousness preservation is that “the soul isn’t hardware. It’s software.”

“If you have an iPhone with data inside, you will lose all your data unless you back it up. But if you back it up, all you need is a new model to download your old data,” he says. “Einz could be the same. We’ve preserved her basic structure. If there wasn’t too much damage, her personality could be revived.”

On criticism of their decision

“We’ve seen newspapers tell our story in a negative way,” says Nareerat, Einz’s 38-year-old mother. “One said we were trapping her soul” inside the cryogenic chamber so that it couldn’t move on to the next life.

Einz was also the subject of an error-filled story in the British tabloid Daily Mail Online. “We were trying to keep our story secret,” Sahatorn says. But their desire to correct the record compelled the family to go public.

The family can withstand the criticism, he says, as long as the facts are straight. “We’re not angry. Different perspectives are good,” Sahatorn says. “Some people keep their bodies underground. Some people make mummies. Some inject chemicals to preserve bodies forever. This is our way.”

For an easy-to-follow primer on the promise (and pitfalls) of life extension and Singularity theory, see this essay: “The AI Revolution: Our Immortality or Extinction.”