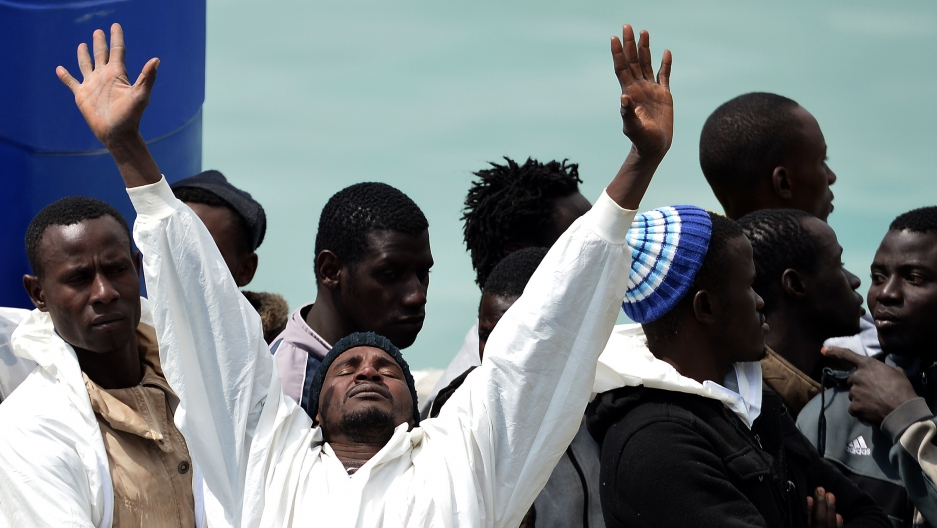 ROME — Escaping slavery put one evil behind him. Then came the horror of crossing the Mediterranean from Tripoli as civil war raged in Libya. Ninety-seven men drifted under burning skies after the motor expired. The boat had no backup power. Cell phones failed. Time itself seemed to end.

“I am a Muslim and I prayed all the time on board,” says Omar, 23. “We were Muslims and Christians, praying for salvation.”

“Three men died. We had to dump the bodies overboard. I lost hope.” On day three a Chinese freighter picked them up, provided water, food and a ride to Sicily.

That was a year ago. With smooth dark skin and an unfurrowed brow, Omar could pass for nineteen. He left his family in Mali in 2012. When traumatic memories uncoil, pain edges into his speech and his eye contact shifts to a bleak gaze.

But Omar— not his real name, a condition for the interview — is among the lucky ones. He received political asylum in Italy and today lives in a large residential complex of Sant’Egidio Community, a progressive Catholic movement based in Rome’s historic Trastevere neighborhood.

As the bells of Basilica of Santa Maria in Trastevere echoed in the hot afternoon, Omar patiently retraced his story in a sparsely furnished conference room of the palazzo built in 1500 that the city rents to the group. It houses thirty refugees, most of them Muslims who fled political violence or war. Forty Italians, many women plus three children, live there too, seeking a path out of poverty.

Sant’Egidio is part of a front line of Catholic humanitarian organizations boosted by Pope Francis’s agenda of “radical mercy” in their response to Europe’s deepening refugee crisis.

In 2014, 170,000 reached Italy by ship, an increase of 277 percent according to International Organization for Migration data.

Eight hundred people died on April 19 as shoddy boats capsized in the Mediterranean. Five thousand more made it to Italian shores in April, a record number for one month.

Demonstrating the escalating pace of migration, approximately 5,000 more people have been rescued at sea in the last week alone, European Union officials reported.

Most of the people, like Omar, have fled war-torn countries. Mali accounts for 30 percent of the migrants who reach Italy.

“The majority of migrants decide to leave Italy and go to the north of Europe where they have friends and relations,” Oliviero Forti, an official on migration issues in Rome with Caritas, the Catholic bishops’ international relief organization, told GroundTruth.

But with tens of thousands of asylum applications backlogged, a large number of refugees live on the margins. Catholic organizations like Caritas are pivotal to the social safety net.

Refugees like Omar gained a global advocate after a mass drowning spurred Pope Francis’s first major trip to the tiny island of Lampedusa, south of Sicily, on July 8, 2013.

“Immigrants dying at sea, in boats which were vehicles of hope and became vehicles of death,” said Francis, showing a sharp contrast with Pope Benedict’s cautious diplomacy.

And then, in words that prefigured an activist Vatican foreign policy, Francis said: “The globalization of indifference makes us all ‘unnamed,’ responsible, yet nameless and faceless.”

In assuming a measure of guilt on behalf of “us all,” the pope shot a flare across the bow of a global church.

“Something changed with Pope Francis,” says Maria Quinto, rector of Sant’Egidio. “The state doesn’t know where to put all these people, but the mayor of Rome wants to find 3,000 places for refugees.”

European Union countries are fractured over a policy response to the escalating flow of people fleeing violence and economic destitution from Syria to the sub-Sahara. A proposed EU quota system that would give relief to Italy, Greece and Malta as arrival points, disbursing refugees to northern countries, has proved toxic.

Cardinal Antonio Maria Vegliò, president of the Pontifical Council for the Pastoral Care of Migrants and Itinerants, told Vatican Radio on May 30 that a quota system was “inhumane."

“I still believe that Europe has never had a plan for migration,” the cardinal said. “It always just scrambled to fix emergencies.”

“Basically, I agree with the cardinal,” Mario Marazziti, a member of the lower house of the Italian parliament and  veteran human rights activist told GroundTruth.

Marazziti criticized the Dublin Convention, an EU protocol adopted in 1990 that requires all migrants to be fingerprinted and gives EU countries responsibility for fielding asylum applications for migrants who arrive within their borders.

“The Dublin Convention is outmoded, and now a barrier,” said Marazziti. “In 1990, 90 percent of migrants were arriving legally. Now only 10 percent arrive legally, and the rest by sea because of wars as the borders of the Middle East and Africa are being changed. A growing part of European society is anti-migrant, and that’s something we have to defuse.”

Two months after his trip to Lampedusa, Francis raised the stakes for the church when he arrived without an escort, according to press accounts, at Centro Astalli in midtown Rome. This branch of the international Jesuit Refugee Service is just behind the Church of Jesus, which the pope’s religious order also staffs.

Astalli serves about 25,000 people annually in Rome, most of them Muslims from Africa, with a soup kitchen, Italian language school, legal counseling and clinic for victims of torture.

“Empty convents are not for the church to transform into hotels and make money from them,” the pope announced in reference to an Italian cottage industry of hostels run by male and female religious orders with government tax relief.

“Empty convents are not ours. They are for the flesh of Christ: refugees,” said Francis.

His remarks cut two ways. On one of Europe’s most divisive issues, Francis announced a role for the church on the political stage, assisting an infrastructure for refugees, which European Union officials understood to include Muslims.

His words reverberated across the church internal, too. Italy is arguably in the forefront of convents put to altruistic use. About 250 nuns work in 100 convents across the country which function as safe houses for sexual trafficking victims, according to National Catholic Reporter.

How Omar made it

Every afternoon Omar attends a public middle school with Italians as well as immigrants. He takes Italian lessons two nights a week at Sant'Egidio. In the morning he hands out resumes at restaurants and cafes in central Rome, seeking work. He says he has had two phone conversations with his mother back home in the last year.

Omar was still in high school when al Qaeda-affiliated militants invaded his hometown in northern Mali and began chopping off the hands of resistance figures. Amid growing pressure to join the military, he sold his motorcycle and left for neighboring Niger with 500 euro in his pocket.

“I had no thought of Europe,” he said at Sant’Egidio, in a mix of French and his fledgling Italian.

“I wanted to establish a life in Niger, get work and finish high school.” He paused. “I had no idea there were no jobs in Niger.”

With funds dwindling, says Omar, he paid 200 euro for a 15-day desert crossing by truck to Sabha, in southwestern Libya, where he hoped to find work and resume his studies.

Over that long trip in 2014, he lived on instant noodles and a tight rationing of water. “Before we reached Sabha, rebels arrested all twenty-seven us on board. They were traffickers who sold us as workers. If you want to be free, they said, pay 350 euro."

Unable to afford the ransom, Omar said he despaired as he worked as a cleaner and carpenter. But his boss neglected to lock a window as he left to do business one day. Omar crawled out and found his way to an enclave of French-speaking Africans on the road to Tripoli.

When he got to Tripoli he found a precious commodity: friendship. He spoke brightly of Issa, a young man from Ivory Coast, another French-speaking African nation.

“He helped me find a job, and a school,” says Omar. “When the Islamists took over Tripoli, bandits killed Issa. He was 23. That is when I decided to find a boat for Italy.”

With translation and additional reporting by Valeria Fraschetti.