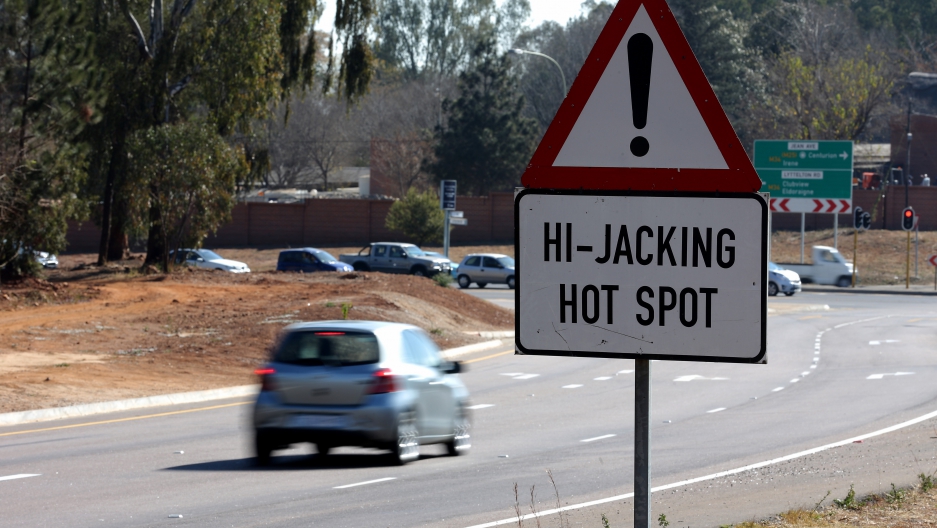 A sign near to a junction of traffic lights warns motorists that the area they are entering is a hi-jacking hotspot in Johannesburg, South Africa.
Credit: Christopher Furlong
Share

JOHANNESBURG, South Africa — Carjacking, one of the most fearsome crimes, is on the rise again in South Africa.

It's a worrying trend for a country that has in recent years beaten back a notoriously high crime rate and worked to improve the image of Johannesburg, South Africa's largest city and economic hub.

But along with other violent crimes, the number of carjackings (called "hijackings" here) has increased for two years in a row, to 11,221 according to the latest police figures. More than half of all carjackings took place in Gauteng, the province that includes Johannesburg and Pretoria.

The individual stories are scary. While some drivers are abandoned unharmed, others are kidnapped, raped and murdered.

In one recent case, a five-year-old boy was stabbed several times by the carjackers and left in a ditch. In another incident, caught on video, an 86-year-old woman was thrown out of the vehicle by her assailant. Fortunately, both are recovering.

The Institute for Security Studies in Pretoria says there has been a "substantial rise" in violent, organized crimes in South Africa over the last three years, and blames a crisis in police leadership.

Perhaps the most haunting depiction of South Africa's carjacking problem is the 2005 film Tsotsi, which won an Oscar for best foreign language film. It tells the story of a young thug from a Johannesburg township who ends up caring for a baby accidentally kidnapped during a carjacking.
Back in the bad old days, as frustrated South Africans searched for ways to protect themselves, one man invented the "blaster" — basically, a flame thrower attached to your car that shoots out a jet of fire at the would-be carjacker.

This didn't catch on. But most cars in South Africa are fitted with tracking devices, and lengthy lists of safety tips are once again making the rounds as carjacking reports from neighborhood groups have become more frequent in recent months.

Drivers are advised to be on extra alert within a mile of their homes, switching off the car radio to concentrate and checking for vehicles that may be following. "Always be on the alert for potential danger," another tip says. "Be on the lookout for possible escape routes and safe refuge along the way."

And don't forget to breathe.