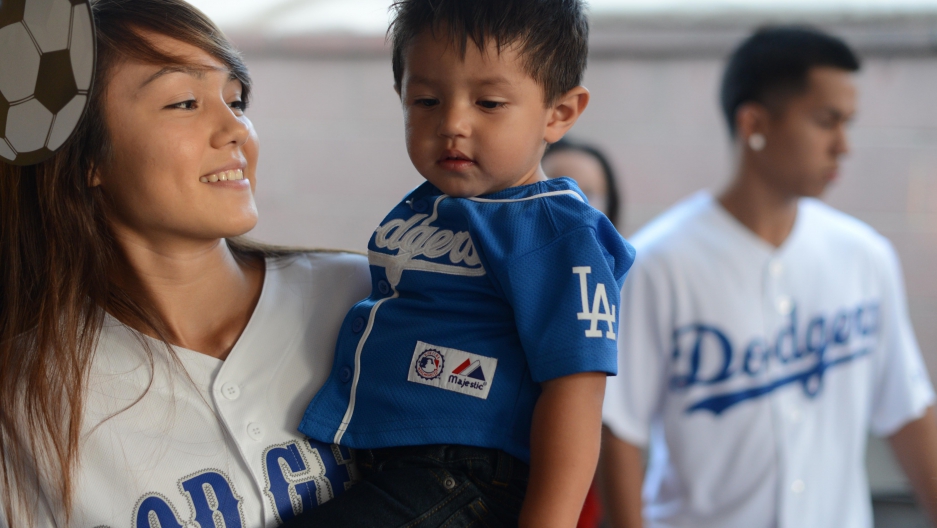 Lupe, 18, holds her toddler cousin at a family birthday party in Torrance, California. Lupe's mother was pregnant with her when she crossed the border nearly two decades ago. Her parents and her brother Jorge, 22, are undocumented.
Credit: Charlie Magovern
Share

This story is part of a Special Report called “Far From Home," a collaboration between the USC Annenberg School for Communication and Journalism, The GroundTruth Project and Fusion.

Gathering in the living room after family dinner on a recent evening, Jorge and Lupe’s similarities stand out: coffee-colored eyes and animated smiles, accompanied by a love for music, travel and learning.

As they sit on sofas, laughing and teasing each other, a visitor would have no way to see that these siblings do not share the same legal status in the United States.

While Lupe is a US citizen with all the rights and privileges that entails, Jorge is not, a fact that contributes to a rift within their family. Most children of unauthorized immigrants — 73 percent in 2008, according to a Pew Hispanic Center report — are US citizens by birth, making Jorge part of the minority.

Jorge was four years old in 1997, when his parents arranged for family members to secretly bring him across the US border. Meanwhile his parents made the treacherous desert journey from their home city of Penjamo, Mexico to the border town of Mexicali and finally to Los Angeles, California.

Later, Lupe and her younger sister were born in Los Angeles, making them natural-born US citizens. Jorge, his mother and his father remain undocumented.

Tens of thousands of unaccompanied children from Central America who have crossed the US-Mexico border since 2014 share the kind of dual reality, some of an estimated 16 million people living in mixed-status families in the US. These minors often join family members who are legal residents or US citizens. So one part of the family lives in the shadows, constantly fearing deportation. Family members living in the US legally must help their kin navigate an alien system, carrying their own burdens of uncertainty.

“It becomes a very complex family,” Jorge said as he took a break from a community meeting on the Obama administration’s executive orders protecting as many as 5 million undocumented residents from deportation. “Because you have to bring two different pieces together and at times, they don’t match.”

Walking through the Del Amo mall in Torrance, Calif., the 18-year-old Lupe is clad in fashionably ripped jeans, a cell phone planted in her hand. Her eyes sparkle when she sees the new styles the shops are displaying for spring.

“This is lace, I’d wear this … and the new jeans, boyfriend jeans, they’re new!” she announces before rushing off to check out a rack of flower-print miniskirts. But she tears up when asked about the divide in her otherwise close and devoted family.

“I don’t think it’s fair for me to just have the advantages of what the US gives,” she said through sobs. “Because to me, basically, they are American.”

Legally, though, they are not. Lupe has a clearer path out of poverty, with a greater change of earning fair pay with full protections of US law. Her brother and parents do not. And, unlike her undocumented loved ones, Lupe does not need to worry about being deported.

The family is thwarted by normal activities that most Americans never think twice about, like piling into the car for a family road trip.

Back in the family’s living room, Lupe and Jorge’s father, a quiet patriarch, becomes emotional when he talks about his dream: to take his wife and children to San Diego to visit Sea World. It might seem like such an easy trip, less than 100 miles from the family’s home. But, Jorge explains why it is impossibly out of reach.

“You have to have identification to travel there,” he said. Sea World, he explained, is too close to the Mexican border and “everyone knows about the immigration checkpoint in San Clemente.” Because Jorge’s father’s work as a restaurant cook provides the bulk of the family income, a trip to San Diego is too big a risk.

“He’s our dad, so mostly he’s more afraid of what would happen to us if he were detained than himself,” Jorge added.

But Jorge’s parents, who took the perilous journey to keep their children from lives of near-certain desperation and poverty, have reason to be hopeful. Their first-born son is living proof that their sacrifices are paying off. Jorge is now a junior at UCLA — the first in his family to ever attend university. His mother and father only have third-grade educations.

Jorge got there, he says, because of the tenacity and work ethic he learned from his parents, as well as a newer law that allows qualified undocumented students who were brought to the US before age 16 to attend school at in-state tuition rates. He also became a community organizer, educating other students about their rights and helping them enroll in college when they otherwise would have given up on higher education.

Ironically, it is now the undocumented Jorge who provides inspiration to his little sisters.

“Being the first one in the family to go to school, it comes with a big responsibility, which is teaching my sisters the importance of education,” he said, resting his backpack on a concrete bench near his classroom at UCLA. “More than a brother, I want to provide guidance. Someone there to say, ‘It’s OK, get back up, let’s figure it out together. If we fail, we fail together. But as well, if we fail, we get back up together.’”

Now it’s Lupe’s turn to follow Jorge’s lead and apply to college. As a US citizen, Lupe will be applying through the standard application and financial aid forms. But not all of them are written with students with undocumented parents in mind.

“It’s like, if my parents are undocumented, then I’m undocumented,” Lupe said of the federal financial aid process. “It doesn’t matter if I am a US citizen or if I’m not because, either way, my parents are not, so it doesn’t change anything. When I tried to apply, they asked for my parents’ social security and … we can’t put what they don’t have.”

Lupe tried repeatedly to submit her financial aid application as the instructions indicated.  After many bounce backs and error messages, Jorge’s years of experience helping students through complicated college applications paid off. He was able to figure out how to file Lupe’s application manually. Now, Lupe will be able to follow her big brother on to college.

Now, Lupe hopes to make her family’s biggest dreams come true, too. When she turns 21, she can apply to sponsor her parents for legal residency through a first-preference visa petition. But the process takes years and the outcome is uncertain.

“When I reach that certain age, I will be able to give my parents papers for them to be in the process of becoming US citizens,” Lupe said. Then, a proud smile bloomed on her face. “And that’s where our adventure will really begin!”

It's even harder for Jorge, because Lupe would have to sponsor him through a fourth-preference visa petition. Getting papers through that process can take decades for people who come undocumented from Mexico.

But Jorge said he remains undaunted. After earning his degree, he intends to start a career working for nonprofit organizations that help people in his community, while he returns to school to earn a master’s degree.

“Fear is only as big as you make it,” he said, as he sat together with his family. “It comes from inside you, so it can never be bigger than you.  You either create fear, or you crush fear. So one way or another, we are going to manage.”

As he spoke, Lupe sat beaming at her brother from the living room sofa.

“Sticking together and being united,” Jorge continues. “That’s what evens out the playing field.”